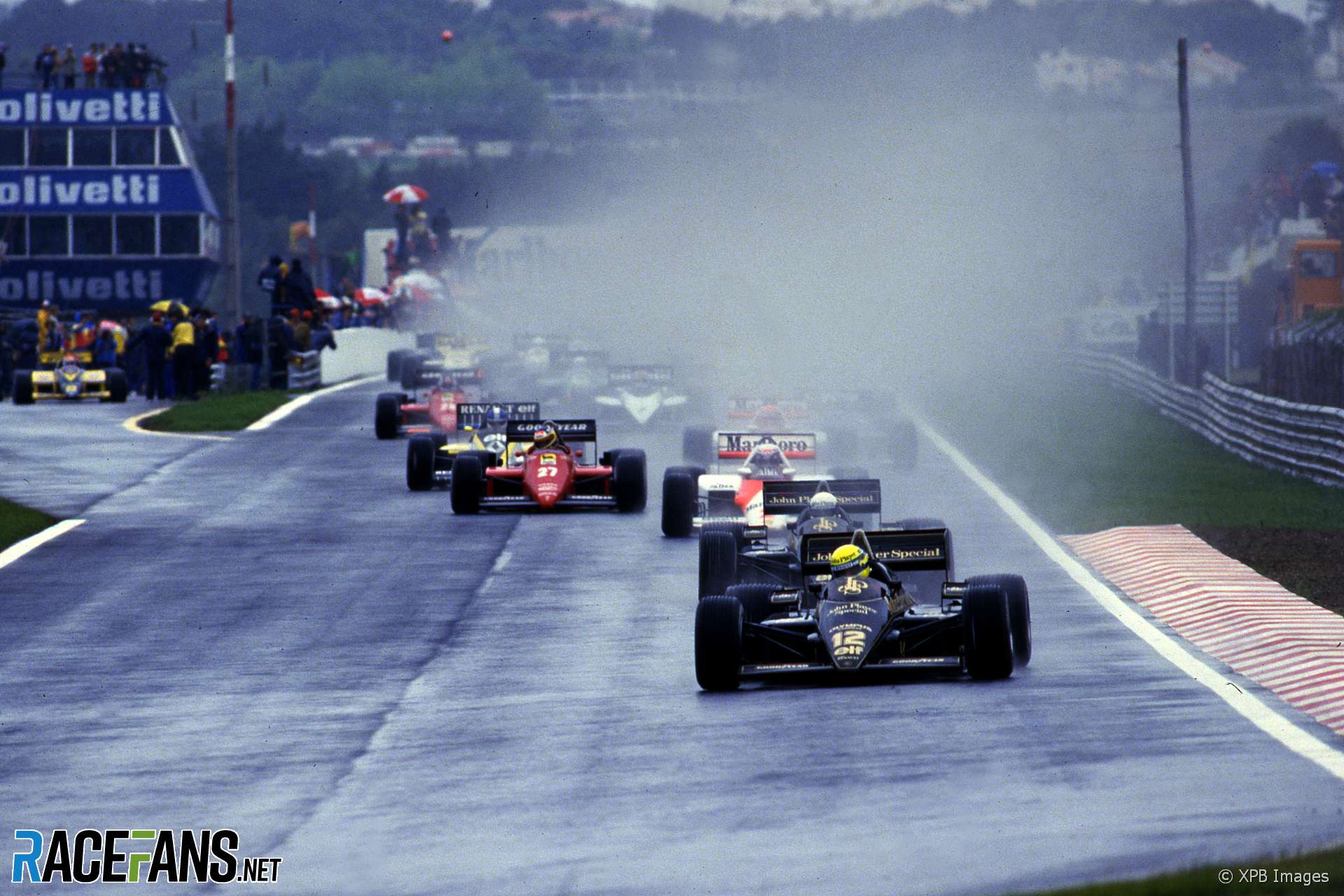 Former Lotus mechanic Chris Dinnage described how the team “knew we’d got something pretty special” in Ayrton Senna when he won his first F1 race with them on this day 35 years ago.

Senna’s breakthrough win came in a rain-lashed Portuguese Grand Prix at Estoril in 1985. It was the second race of the season, and Senna “hadn’t tested the car in the wet”, Dinnage revealed in an interview for Classic Team Lotus.

“We didn’t really know what to expect,” said Dinnage. “We had no idea.

“We were pretty confident we were going to do well as we were in Brazil two weeks beforehand. But we had no idea.”

Having qualified on pole position in dry conditions, Senna romped away from the field when it rained on Sunday. “That’s when he really hit the scene,” said Dinnage, “because people sat up then and thought ‘he’s lapped everyone except his team mate’, I think.”

In fact Senna did lap fourth-placed team mate Elio de Angelis before the end of the race. He also lapped Patrick Tambay, who was third, leaving Michele Alboreto the only un-lapped finisher over a minute behind in second place.

“We knew we’d got something pretty special then,” said Dinnage.

The previous season Senna, driving for Toleman, finished second to Alain Prost in a similarly wet Monaco Grand Prix. Prost spent the latter laps frantically gesturing for the race to be stopped early, which it was.

Senna did the same in Portugal, but the race ran to the two-hour time limit. “One of the things where he may have benefited from, or may have got his feelings across a little bit better, was if we’d had radios in those days,” remembered Dinnage. “But the only pit-to-car radios were when they were actually in the pit lane, plugged in. So we had no communication with him other than the pit signal.

“I think he would have really liked to have stopped the race a bit sooner because of the conditions. But he wasn’t able to get that point across to us or the officials. So it kept going at full distance. I think that was probably a big relief at the end of it.”

Lotus had been close to winning in Monaco the year before with Nigel Mansell, noted Dinnage. “What everybody forgets is that Mansell was 48 seconds up the road in that race and threw it in the wall,” he said. “He’s the one who really should have won that race.”

Mansell famously blamed a slippery white painted line on the circuit for his race-losing crash. “[It was] strange, the white line had been there every previous lap as well, so I’m not quite sure how he managed to miss it on all those previous laps and still manage to put it in the wall on another,” said Dinnage.

“He should have just slowed down a little bit, but he couldn’t do that. And that is one of the differences between Nigel Mansell and Ayrton.

“Because Nigel had the raw speed, there’s no question about that. But I think that Ayrton had that same raw speed but he was only using 50% of his capacity as a human to drive the car at full speed and he had the other 50% to be really aware of everything that was going on around him. Whereas Nigel was flat-out, full-on and he didn’t have the same concentration levels that Ayrton had.”

When Senna took his first win at Estoril, Mansell was involved with a hair-raising near-miss involving members of his former team, who had run onto the circuit to celebrate their triumph since 1982.

“That was the last time mechanics were ever allowed on the other side of the pit wall to celebrate a victory,” said Dinnage. “We were so far out onto the track it was really very dangerous and Mansell had to take to the grass. So he was complaining bitterly about it. After that race, they banned mechanics, jumping over the pit wall.”

Senna rated his first grand prix victory in the atrocious conditions as one of his greatest drives, even outstripping his celebrated win at Donington Park in 1993.

“He always defaulted to ‘no, actually the most challenging, rewarding, the best, most difficult was Estoril – I had no traction control, I had 900-odd horsepower and a stick shift and three pedals”, remembered Dinnage.

10 comments on ““We knew we’d got something special” – Senna’s mechanic on his first win, 35 years ago today”