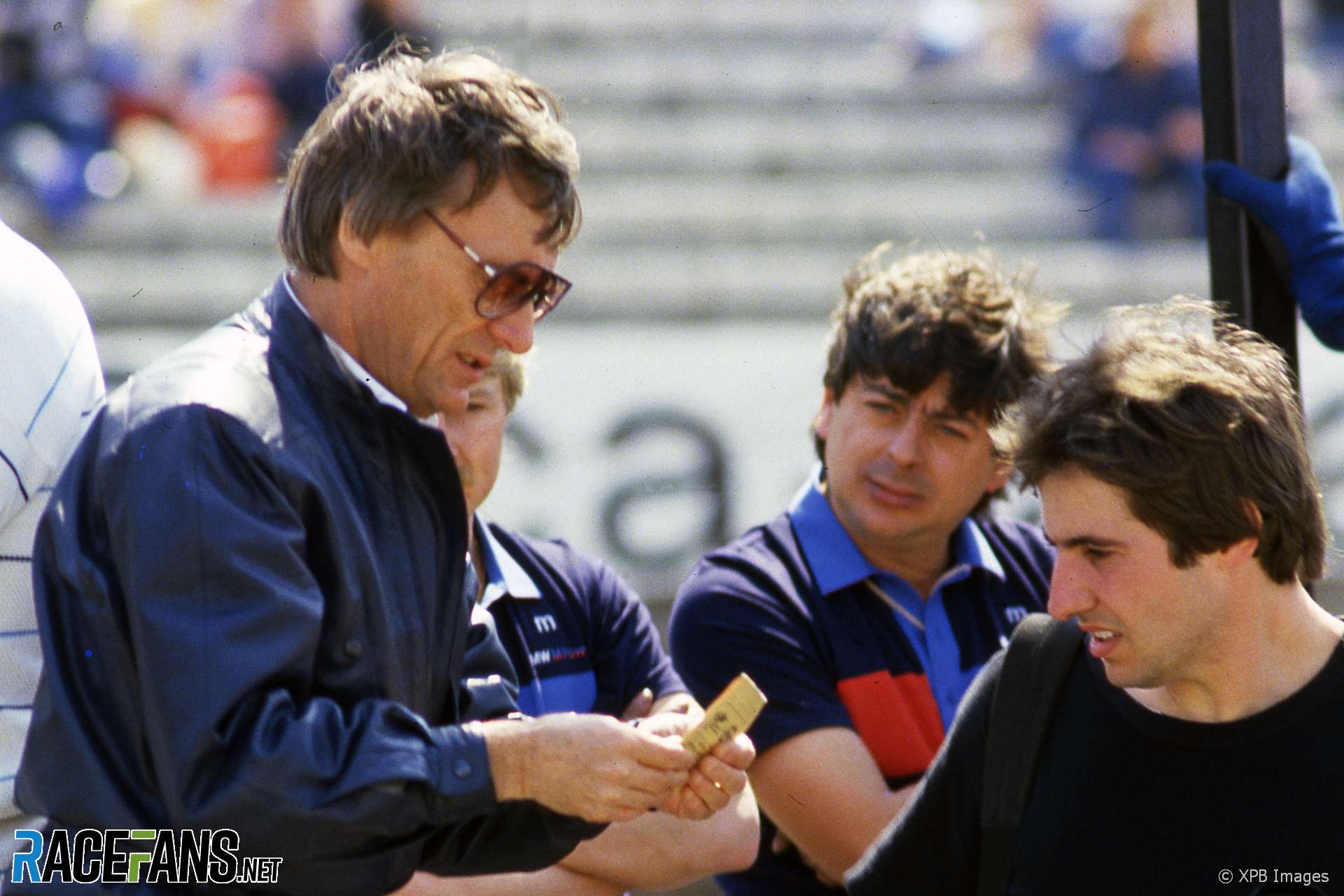 Bernie Ecclestone became the most powerful man in Formula 1 with a multi-billion dollar fortune by mastering every known negotiating trick – and inventing a few new ones.

Two of his former drivers reveal what it was like to go up against the biggest piranha in the tank.

“I never pay a driver”

The Brabham BT54 was a hard car to tame. Bernie Ecclestone’s team had switched from Michelin to Pirelli tyres during the off-season, and the combination of their unpredictable rubber with their BMW turbo’s immense power was proving a tough task for its drivers to master.

While that was true for the team’s two-times world champion Nelson Piquet, it was even more so for his much less experienced new team mate Francois Hesnault. By the fourth race of the season in Monaco, Ecclestone was already seeking a new partner for Piquet, and happened across Marc Surer, who had lost his drive at Arrows the previous year.

“I was in Monaco commentating for Swiss TV and I met Bernie,” Surer recalled in an interview for RaceFans. “And Bernie said ‘what the hell are you doing, why are you not in Formula 1?'” Surer told him he “would like to drive, one day, a good car”.

Having failed to finish in his three appearances so far, Hesnault went one worse in Monaco by failing to qualify. He spun in the tunnel and his best effort was a lamentable three seconds shy of Piquet’s. But Surer felt his rival’s days were numbered long before then.

“I got the drive because Francois Hesnault crashed, I think in Imola, on the straight with the Brabham. Somehow, after driving the Renault engine before, he could not believe how the power suddenly came in on the BMW turbo.

“Perhaps the combination with the Pirelli tyres, we had sometimes no grip, they were very difficult when it was cold, they were very good when it was hot. But also they had about 25 different compounds. Sometimes you get a good set and sometimes a bad set. It was really difficult to drive. Bernie said to Francois Hesnault ‘for your own health, stop Formula 1’. And then he put me in the car.”

Surer was originally summoned to drive for the team in the Belgian Grand Prix. He drove to Spa, only to find the race had been called off because the newly-laid track surface had broken up. He eventually made his debut at the Circuit Gilles Villeneuve where he drove a cautious race but at least saw the chequered flag, albeit in 15th place.

Soon after that, Surer discovered the pressures Ecclestone subjected his drivers to. “We went for testing at Silverstone, I was doing the first day, and then [team manager] Herbie Blash came and said ‘sorry Marc, tomorrow Emanuele Pirro will drive the car’.

“So my seat was not sure, I was really under pressure. But he didn’t beat my time, so I stayed in the car.”

Surer improved to eighth on his second outing for the team, and soon afterwards broached the subject of his pay with Ecclestone. “We were sitting on this island in a hotel for dinner and I said we should discuss our deal because so far we had agreed nothing.”

After the Pirro episode, Surer was concerned Brabham sponsor Olivetti was manoeuvring to get a different Italian driver in the car. “I knew there were some people waiting. Andrea de Cesaris was also knocking on the door of course with the help of Olivetti.

“But anyway at this time I felt I had to ask [Ecclestone] because I have to live [on] something as well. I said ‘we have to discuss my salary’. And he said ‘I never pay a driver’.

Ecclestone has often insisted he settles his deals with handshakes rather than contracts – which Surer confirmed was the case once he finally persuaded the Brabham boss to pay him. “We agreed a fixed sum per race for me and prize money. And did this by hand – never a contract, nothing.

“After a race on the first date the prize money was in my account. That was really the only Formula 1 team ever which paid so correct,” said Surer. “It was little money but it was quite good price money so it was worth the deal.”

However he wasn’t able to enjoy it beyond the end of the season. Despite Piquet moving on, Brabham signed a new all-Italian pairing of Riccardo Patrese and Elio de Angelis for 1986.

The following year Ecclestone again found himself in need of a new driver after the Monaco round, but this time for the worst possible reason. De Angelis’s BT55 had flipped while testing at Paul Ricard, the driver was trapped in his burning car and died.

The team ran a single-car entry in Belgium, but for the next round Ecclestone appointed Derek Warwick alongside Patrese.

“When when Elio was killed at Ricard I was obviously following it like everybody else was,” Warwick told RaceFans. “I was tempted to call Bernie.

“But I just felt it was wrong. The guy had not been dead long. I left it for about nine, 10 days and then I got a call from Bernie.

“He said ‘do you want to drive for me?’ I said ‘of course’. He said ‘Okay, I’ll send a plane over’. It picked me up in Jersey and took me to Brabham.

“When I got there, what transpired really was [that] within an hour of Elio passing, [Ecclestone] had all sorts of phone calls from drivers telling him that they were available to fill the seat. I think that disgusted Bernie. He’s got a lot of principles. And the fact that I didn’t call him when went for me, for sure. So he offered me the drive there and then.”

Warwick found the terms were “fair” – Ecclestone offered him the same terms De Angelis had been on, adjusted to take into account the missing races. But Warwick soon discovered how easily he could over-play his hand with Ecclestone.

“We had a massive disagreement because by the time I got to Brabham I’d pumped myself up to be worth millions. And of course, I got in there and I said, no, Bernie this is not going to work. I’ve got a dead man’s seat. I’ve got to help build the team up again. The car’s not very good.

“I said I want to look around the team, speak to [designer] Gordon Murray, speak to [chief mechanic] Charlie Whiting, Herbie Blash and all the guys.

“He just said ‘no, you either sign this contract now or walk out the door’. You don’t get a tougher negotiator than Bernie Ecclestone, that’s for sure.

“Of course I has no bargaining power whatsoever so I signed the contract and then walked around the factory. And everybody was giving me the thumbs-up, glad that I was there and joined the team.”

Ecclestone only ran Brabham for one more year before calling time on his successful stint as a team owner. He then applied himself to an even more successful spell in charge of a sport he transformed.

Derek Warwick was speaking to RaceFans for an upcoming edition of My F1 Cars. Don’t miss the full-length feature coming soon.

My F1 Cars is part of a new series of articles we are running throughout the hiatus. To help RaceFans produce more great original articles – and to browse the site ad-free – please consider becoming a RaceFans Supporter.