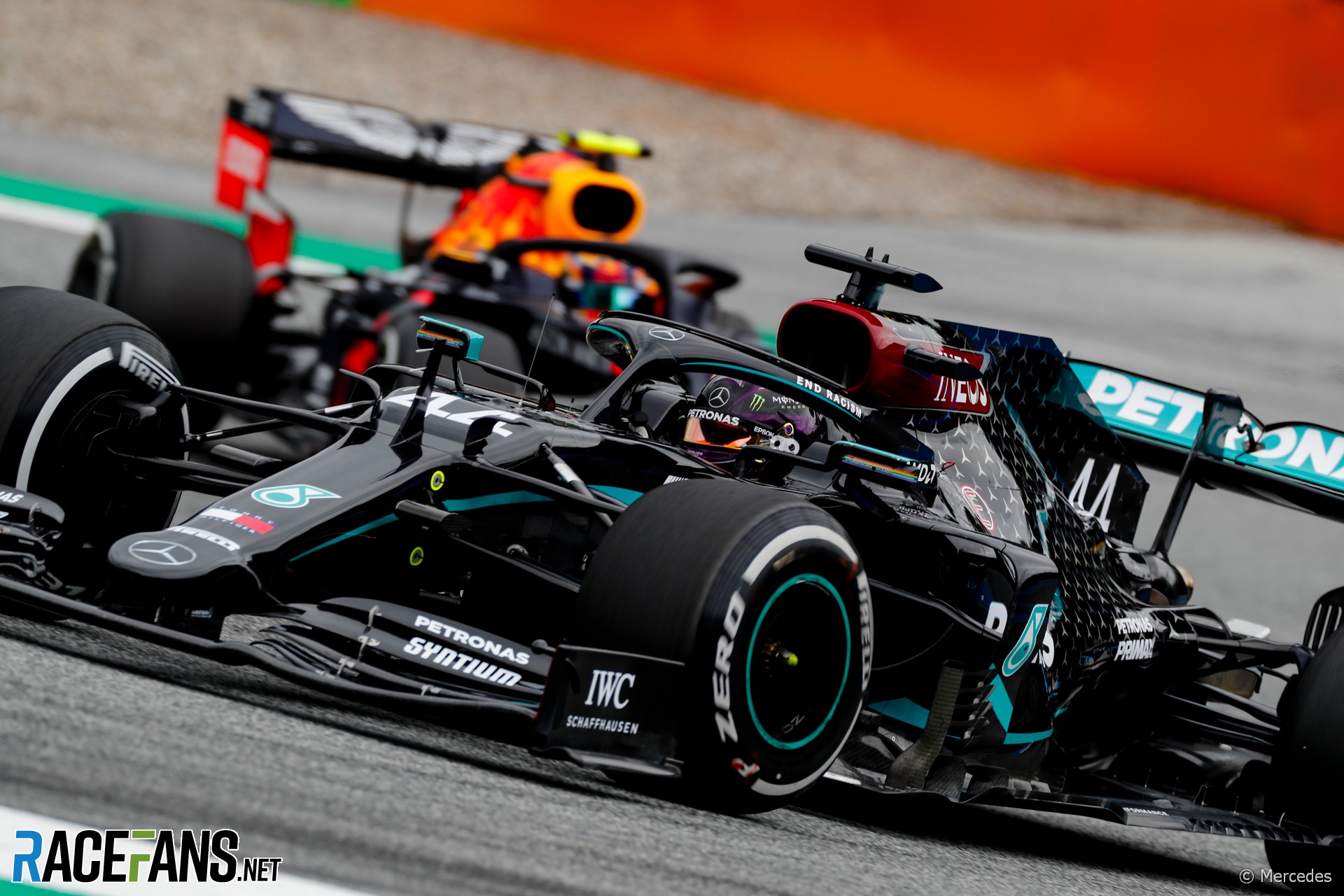 Red Bull’s protest against Mercedes over the legality of their dual-axis steering system has been rejected by the stewards at the Austrian Grand Prix.

Red Bull objected to the design of the DAS system, which allows Mercedes’ drivers to adjust the toe angle of their front wheels by sliding the steering wheel forwards and backwards.

In their protest, Red Bull queried its compliance with regulations on the cars’ aerodynamic surfaces and suspension. However their claim DAS is part of the car’s steering system, and therefore may not be adjusted while the car is moving, was rejected.

The stewards ruled DAS is “physically and functionally a part of the steering system” and that “it benefits of the implicit exceptions to certain suspension regulations applicable to steering”.

The ruling has no effect on the legality of DAS beyond 2020, however. The FIA has already issued updated regulations for next season, when DAS will be banned.

Stewards Decision: The Protest is rejected as it is not founded.

Red Bull claimed in its protest that the car would be not in compliance with Art 3.8 and 10.2.3 of the 2020 Formula One Technical Regulations. The parties were summoned and heard. The following persons were present during the hearing (in person or via video conference):

On behalf of the FIA Technical Department:
– Nikolas Tombazis

2. The FIA Technical Department carried out an analysis of the Mercedes system and the Stewards inspected the relevant car parts.

3. At the hearing there were no objections against the composition of the Stewards panel or against the procedure of using a video conference call in addition to a face to face hearing. The parties set out oral arguments and addressed the questions asked by the Stewards. The FIA expert was interviewed and explained his written comments.

The claims of Red Bull:
• The Mercedes DAS design breaches Articles 3.8 and 10.2.3, Aerodynamic Influence and Suspension Geometry respectively, of the 2020 Technical Regulations via the following rationale.

With the exception of the parts necessary for the adjustment described in Article 3.6.8, any car
system, device or procedure which uses driver movement as a means of altering the aerodynamic
characteristics of the car is prohibited.

No adjustment may be made to any suspension system while the car is in motion.

DAS appears to work by changing the toe angle of the front wheels. This is separate in effect to the traditional steering system as it does not involve movement of the steering rack pinion gear.

Alteration of the static toe angle on the front axle will also change the aerodynamic characteristics of an F1 car, typically performed in set-up and prohibited in Parc Ferme. DAS operation, which is a front axle toe angle modifier, will have a measurable aerodynamic effect on the car, whether changing the trajectory or not.

A steering system should alter a car’s trajectory when used. Observation of DAS usage in FP2 indicated deployment in a straight line with no change of trajectory, thus rendering DAS not a steering system.

By observation of the video footage from FP2, use of DAS was not every lap and isolated to in/out or re-charge laps thus it was not a system necessary for use in timed laps, rendering the pimary purpose to be something other than steering.

Subsequent use in a corner cannot recover the breach as the competitor must demonstrate compliance with the regulations at all times during an event, Article 2.7 of the Technical Regulations.

The Technical Regulations do allow multiple steering systems. RBR contend a steering system should have the primary purpose of being able to steer the car. A secondary system that is, on its own, incapable of steering the car is an unnecessary system.

A key discussion point must be why have Mercedes added the DAS system? As mentioned above, judging by practice today, it appears to be used on out and slow laps as a means of adjusting tyre temperature, i.e. its primary purpose is not as a steering system but rather a tyre temperature management system.

In conclusion, DAS is an unnecessary, separate system requiring a separate driver input and using components which are separate in their effect to the main steering system breaching Articles 3.8 and 10.2.3 »

« DAS is not a suspension system because:

1. It is mounted on the fully sprung side of the car and plays no role in suspending the car, or insulating the car from the undulations on the road surface
2. It is mounted fully on the power assisted steering rack.
3. All it is capable of doing –just like a traditional steering system –is to alter the alignment of the front wheels about the kingpin axis by changing the position of the outboard ends of the steering rack
4. It cannot change the length of any of the suspension members

DAS is a steering system because:

1. Actuating conventional steering moves the wheels in the same direction
2. Actuating DAS moves the wheels in the opposite direction – it is like changing the static toe angle of the steering system
3. Conventional steering often also changes the toe – but it does so as a function of steering angle
4. Changing the toe angle of the wheels changes the forces on the front tyres.
5. Any driver knows that changing the toe makes the car change its steer response (from lazy to nervous) – changing this value while the car is manoeuvring (in corners or on the straights) will cause the car to steer.
6. This is because under all track conditions (except the purely hypothetical situation of zero wind and geometrically perfect track), the difference in load on the tyres from left to right will cause the car to steer when the toe angle is changed.
7. DAS is a steering system that allows the driver to optimise the toe, and therefore the steer response of the car during a run instead of being confined to changing only from run to run.

DAS is a legal steering system because:

1. It fully respects Article 1.2 and 10.4.1 in that it only allows for the alignment of two wheels
2. It is not electronically controlled
3. It passes all the geometrical and safety requirements of 10.4
4. It is a steering system, and so benefits from the same implicit exemptions from article 3.8 as every conventional steering system on the grid
5. We have fully complied with our obligations under Art 2.5 to describe the novel system. »

Conclusions of the Stewards:

The Stewards decide that DAS is a part of the Steering system.

1. Article 1.2 states that “at least two (wheels) are used for steering” and Article 10.4.1 states that “the re-alignment of more than two wheels is not permitted”. These two articles hence limit the number of steered wheels to 2, but crucially no reference is made on that realignment being of a single degree of freedom (i.e. the LH wheel having a single function of position in relation to the RH wheel).
2. There is no direct definition of steering, but one can plausibly suggest that:
a. Steering changes the direction of the car
b. During steering the steered wheels rotate about a vertical or near-vertical axis to change their direction, and hence steer the car.
3. Changes in toe affect the direction of the car in two ways:
a. If toe changes in a corner, the effect will be asymmetric and hence the trajectory of the car will change b. If the driver applies a steering wheel (rotational) input, the response of the car will depend on the toe angle of the wheels, hence the fore-aft position of the DAS will have a direct steering effect.
4. Mechanically, the DAS re-aligns the two front wheels via the same central mechanism that conventional steering does (i.e. the PAS). The fact it acts on the track rod is, we believe, entirely equivalent to the conventional steering.
5. A hydraulically-powered DAS which remains under the full control of the driver is also entirely consistent with the hydraulically-powered conventional steering system.
Because of the above arguments, the Stewards believe that DAS can be legitimately considered to be part of the car’s steering system, and hence that it should be subjected to the same implicit or explicit regulations as the conventional steering system.

The Stewards decide that DAS is not in breach of the suspension-related regulations.

1. Fundamentally suspension has the purpose to insulate the sprung mass of the car from the undulations in the track surface. The alignment of each front wheel (i.e. its steering angle) has an effect on the suspension, but this is incidental. Article 10.2.1 specifically deals with this matter, stating that “With the steering wheel fixed, the position of each wheel centre…etc.”. This Article essentially separates the function of the suspension and that of the steering. It is also clear that the steering wheel position is in this case a two-degree-of-freedom system.
2. Consequentially, the legality of the DAS system is identical to the conventional steering system in terms of the legality under Articles 10.1.2, 10.2.2 and 10.2.3.
3. The legality of the DAS system under other parts of the regulations (Article 3.8 – aerodynamic effect, ride height with steer (TD/003-18), etc.) is equivalent to that of the conventional steering system as the DAS, for the reasons stated, is considered to be part of the car’s steering system.

For the above reasons the Stewards conclude that the DAS system is not part of the suspension, nor can it be considered to illegitimately adjust the suspension.

Therefore the Stewards consider DAS to be a legitimate part of the steering system and hence to satisfy the relevant regulations regarding suspension or aerodynamic influence.

In the opinion of the Stewards, the DAS system is physically and functionally a part of the steering system.

As such, it benefits of the implicit exceptions to certain suspension regulations applicable to steering.

Competitors are reminded that they have the right to appeal certain decisions of the Stewards, in accordance with Article 15 of the FIA International Sporting Code and Article 10.1.1 of the FIA Judicial and Disciplinary Rules, within the applicable time limits.

*A similar document was issued for Valtteri Bottas’s car, number 77