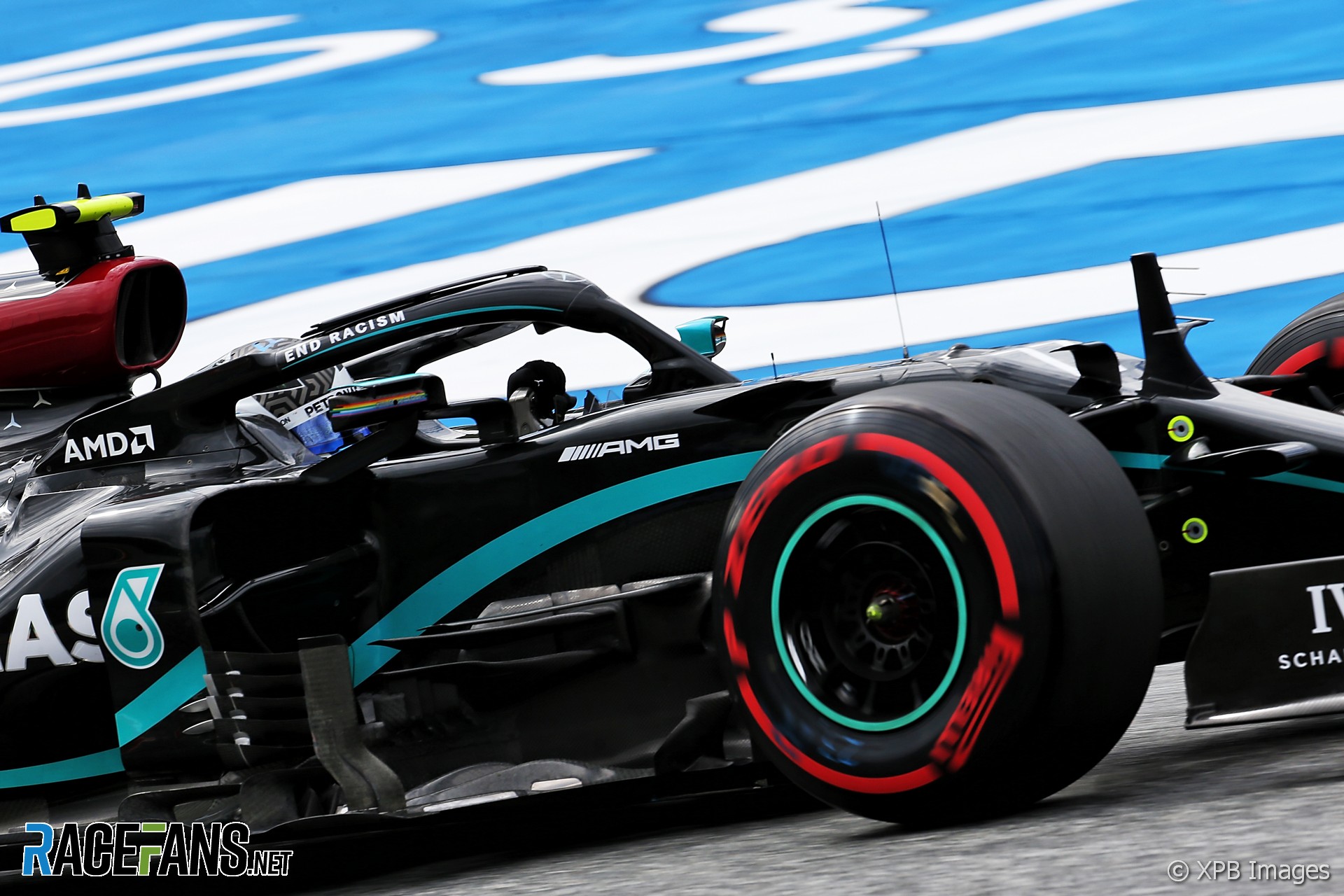 Valtteri Bottas took pole position for the first Formula 1 race of 2020 in Austria despite running wide and spinning on his final run.

The Mercedes driver will share the front row of the grid with Mercedes team mate Lewis Hamilton, who had headed all three practice sessions at the Red Bull Ring.

Max Verstappen will line up in third place behind them, with Lando Norris’s McLaren joining him on the second row.

On Friday, George Russell said he thought it unlikely Williams would get one of their cars into Q2. He came very close, however, ending qualifying just 0.073s shy of Romain Grosjean, the last driver to make the cut for Q2, the other Haas of Kevin Magnussen separating the pair.

Russell improved his final effort after losing time one his first run when he encountered traffic at the end of the lap. He beat both Alfa Romeos, relegating Kimi Raikkonen to the back row of the grid. Nicholas Latifi, driving a repaired car after crashing heavily in final practice, claimed the final spot on the grid, almost six tenths of a second slower than his team mate.

Ahead of them the lap times were as close as ever around the short Red Bull Ring. Raikkonen, 19th, was only 1.2s slower than the quickest driver.

For the first time this weekend, that pace setter was not Lewis Hamilton. The world champion had a couple of scruffy runs in his Mercedes, complaining of steering problems after running wide at turn three.

Max Verstappen set the pace, followed by the Mercedes pair. But his team mate Alexander Albon could only manage 12th, six tenths of a second slower than Verstappen, after damaging his front wing.

Mercedes showed their hand in the second part of qualifying. Hamilton, looking comfortable in his car once more, produced a 1’03.325 on soft tyres to lead the way, Valtteri Bottas matched his tyre choice in second place.

Red Bull, seeking a strategic edge, sent Verstappen out on mediums tyres. This was a risky decision, with the midfield extremely close behind them. His first run resulted in a 1’04.000, so the team opted to play it safe with a set of softs for his last effort. Ferrari were under serious pressure: Despite using soft tyres for their first runs, Leclerc and Vettel were only eighth and tenth.

Stroll was first to begin his final run but didn’t improve on his fourth-placed time. The Mercedes pair ran again and Bottas relieved Hamilton of first place.

The Ferrari pair struggled to improve on their final runs and Vettel remained in 10th place. That looked vulnerable with Albon 13th and Ocon 14th yet to improve their lap times. Sure enough, Ocon vaulted into the final 10, and Vettel was out.

That put Leclerc down to 10th place but his place was secured as Ocon failed to improve. That meant just one of the six Ferrari-powered cars claimed a place in Q3.

Ocon was unhappy to miss the cut after setting a time over half a second faster than team mate Daniel Ricciardo, who had benefitted from a slipstream on their runs.

“Did we say that I was going behind Daniel in this session and I was always in front?” he asked on the radio afterwards. “Now isn’t the time to talk about these things,” came the reply.

Bottas’s first lap of Q3 was a clean one: A 1’02.939 gave him the advantage over Hamilton, who was a tenth off on his first run. It set the pair up for a showdown over their final runs.

Ahead his first run, Bottas’s engineer told him he could find a fraction more time at turn one. But he came unstuck three corners later. The W11 ran slightly wide out of turn four and the gravel trap did the rest, gradually pulling him off the asphalt. He bumped a long way over the infield grass before eventually spinning.

Meanwhile much of the rest of the pack was coming by, including his team mate. “I came out of turn four and there was a big puff of dust,” said Hamilton. “It didn’t really affect the lap.” Nonetheless he fell shy of beating his team mate by just 12 thousandths of a second.

Other drivers did encounter yellow flags as a result of Bottas’s off, including Ricciardo, who was frustrating at having to back off on his only flying run. he ended up 10th.

Lando Norris, meanwhile, had been delayed in the pits on his way out as several drivers tried to pull into the pit lane at once. This turned out to his advantage, and he claimed a fine fourth place on the grid alongside Verstappen.

Albon and Perez claimed row three with identical lap times to within a thousandth of a second, though Albon will start ahead by dint of setting his time first.