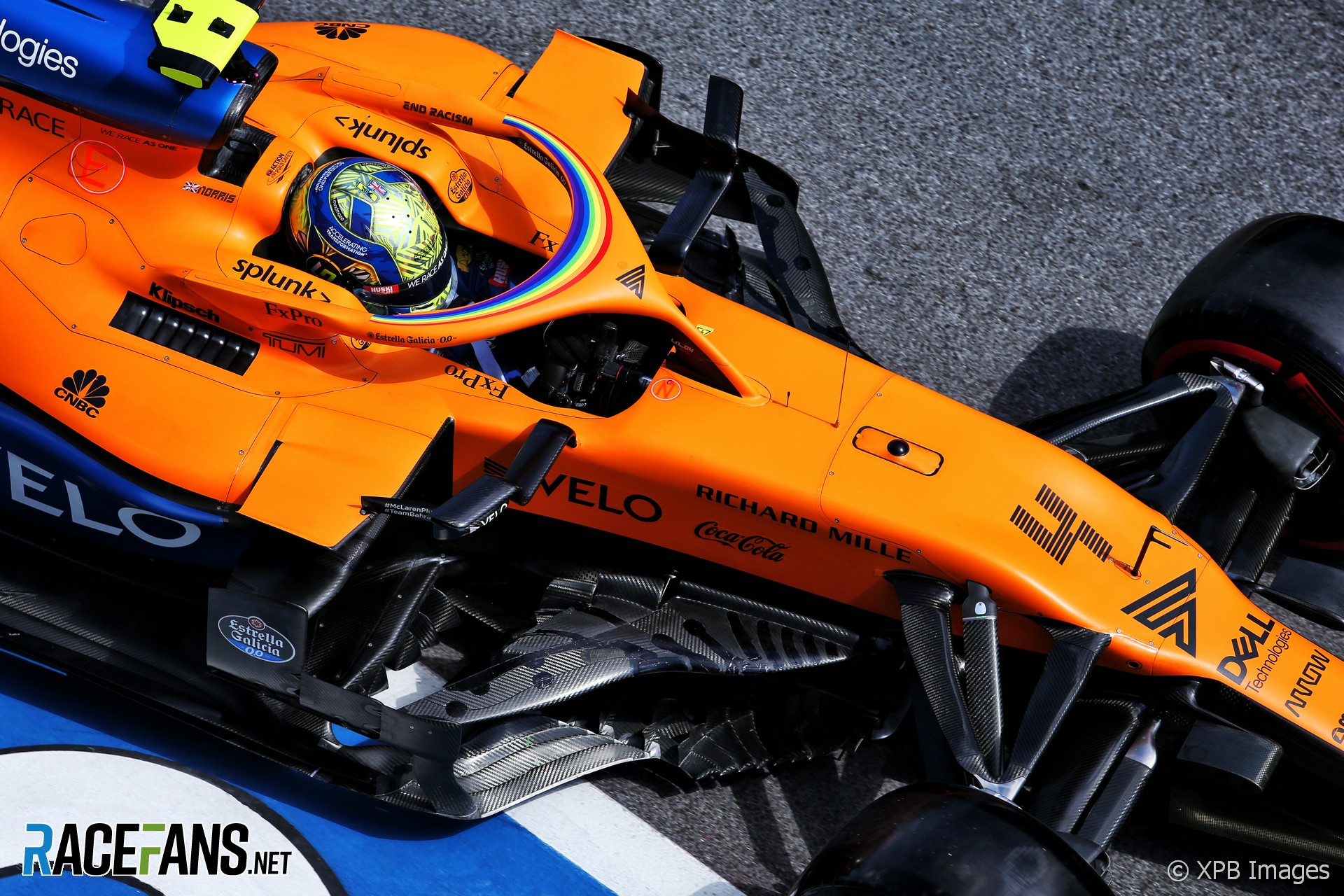 McLaren played down their chances of leading the midfield before qualifying as Racing Point and Renault showed strong pace in practice. But Norris sprang a surprise with a career-best fourth in qualifying, ahead of a Red Bull and both Ferraris, despite being delayed on his way out of the pits before his final run. He was later promoted to third on the grid when Hamilton was awarded his pre-race penalty.

Norris pressured Verstappen during lap one but he didn’t have the pace to keep up with the front runners and was inevitably passed by Albon and Hamilton. He held off Perez until the first round of pit stops, following which Perez used his softer tyres to get ahead.

However pitting for soft tyres during the second Safety Car period made Norris’s race. While he couldn’t contain Leclerc, Norris lunged down the inside of Perez at turn three, banging wheels with the Racing Point as he took fourth place.

Having been told Hamilton had a five-second penalty, Norris pushed hard to get within range. He was eight tenths away as the final lap began, but a scorching lap – the fastest of the race – saw him clinch his maiden podium finish by one tenth of a second.

Ferrari’s severe lack of pace was illustrated for the first time during qualifying on Saturday as Leclerc couldn’t manage any better than seventh, though he left his team mate behind in Q2.

The team expected slightly better race pace, which was only slightly realised. Having been unable to clear Perez at the start he bided his time behind the Racing Point until the second Safety Car period. A switch to medium tyres helped him go on a charge: Leclerc made quick work of Norris, followed by a spectacular late-braking move on Perez. Thanks to Hamilton’s five-second penalty Leclerc was promoted to second, just 2.7 seconds behind race winner Bottas.

It was clear the Mercedes was the superior car in practice. Lewis Hamilton seemed was the quicker of the two, but Bottas seized his opportunity to take pole position, albeit aided by the fact he spun off, triggering the yellow flag which caught out his team mate.

With Hamilton starting fourth and Verstappen battling with Norris on the opening lap, Bottas escaped to an early lead and wasn’t pressured until the Safety Car period bunched up the pack. Bottas made three flawless restarts with a six-time world champion right behind each time, all while managing a gearbox problem from the start of the race.

Hamilton’s five-second penalty gave Bottas some breathing room for the final laps of the race, capping off an impeccable drive with a win and an early lead in the championship.

Latifi’s debut weekend got off to a poor start after the rookie spun on the exit of turn one during practice three and collided with the barriers. Due to the compact schedule and ongoing tripleheader, parts can be scarce so each shunt has a much larger impact than ever before, especially on a smaller team like Williams.

His mechanics were able to get the car repaired in time for qualifying but the limited track time on his first race weekend cost him dearly when it boiled down to pure pace and Latifi ended up six-tenths behind team mate George Russell, who demonstrated the car could outpace the Alfa Romeos.

In the race, Latifi was unable to fight with any of the cars around him while Russell battled with the Alfa Rome and Haas drivers. His race wasn’t helped by the team bringing him in on the second lap of the first Safety Car period, or by leaving him out during the second. Among the 11 cars running at the end, only Latifi failed to score.

Although he beat Kevin Magnussen into Q2, by less than a tenth of a second, Grosjean’s race was much rougher. He slipped backwards from the start, passed by both Renault drivers and his team mate. After a spin and an excursion through the grass at turn four, and three warnings for track limits violations, he retired with brake problems.

Hamilton appeared to be the man to beat throughout practice, but was unable to capitalise on Bottas’ spin in Q3 to take pole due to the yellow flags, and was penalised for failing to slow in response to them. After picking off Albon and Norris, Hamilton closed on Bottas. The first Safety Car eliminated his opportunity to jump ahead through the pits, but put him on Bottas’s tail. But by this point the gearbox situation was growing serious and both drivers were unable to push flat out.

With ten laps to go Hamilton tagged Albon’s right rear tyre and was quickly given a five-second penalty for causing a collision. This was enough to cost Hamilton a podium finish.

Carlos Sainz Jnr was outshone by his team mate: out-qualified and not quite on Norris’s race pace. In the beginning of the race, Sainz was stuck behind Leclerc but he delivered more points for Mclaren by picking off Perez for fifth.

Racing Point looked like the midfield leaders during practice, but neither driver qualified at the expected level, Perez starting sixth and Lance Stroll ninth. Engine problems forced Stroll to retire early on while Perez battled within the top five. After opting not to pit during the second Safety Car period, he was overtaken by Leclerc, Norris, and Sainz before finishing sixth.

Pierre Gasly and Daniil Kvyat lined their AlphaTauris up 12th and 13th respectively. Both cars were running in the points for much of the race until Kvyat was involved in a wheel-to-wheel battle with Ocon and suffered a left-rear puncture and suspension failure with two laps to go. Gasly kept out of trouble and crossed the line seventh.

Esteban Ocon was unhappy at the amount of time he lost on the straights by not having a tow in qualifying. Ricciardo made it to Q3 but his final run was ruined by Bottas’s yellow flags. Engine problems took Ricciardo out of the race early on after being passed by Vettel, while Ocon delivered points for eighth on his F1 return.

Alfa Romeo struggled as all the Ferrari-powered cars did and both drivers were eliminated in Q1. Both benefitted from retirements ahead to move up the order until a cross-threaded wheel nut caused Kimi Raikkonen to lose his front right wheel. Giovinazzi finished ninth.

Vettel was unhappy with the balance of his car all weekend and failed to advance out of Q2 on Saturday. On Sunday he described his car as almost undriveable, and it looked it. He spun while trying a speculative move on Sainz, and recovered to finish tenth.

Max Verstappen started alongside Bottas on harder tyres but an engine issue halted his race on lap 12 as the car kept going into anti-stall mode. Albon settled into third after starting fifth and used his softer, newer tyres to go around the outside of Hamilton, who spun him out. “Sore loser,” was Albon’s verdict on the radio.

Russell showed encouraging signs in the Williams during qualifying after coming less than a tenth shy of making it out of Q1. He got as high as 12th in the race before an engine problem ended a promising day.

Magnussen had the best opening lap on the grid, rising from 16th to 11th. He was able to hold his position until his brake problems intensified in the Austrian heat and he eventually spun into turn three, bringing out the first Safety Car of the race.