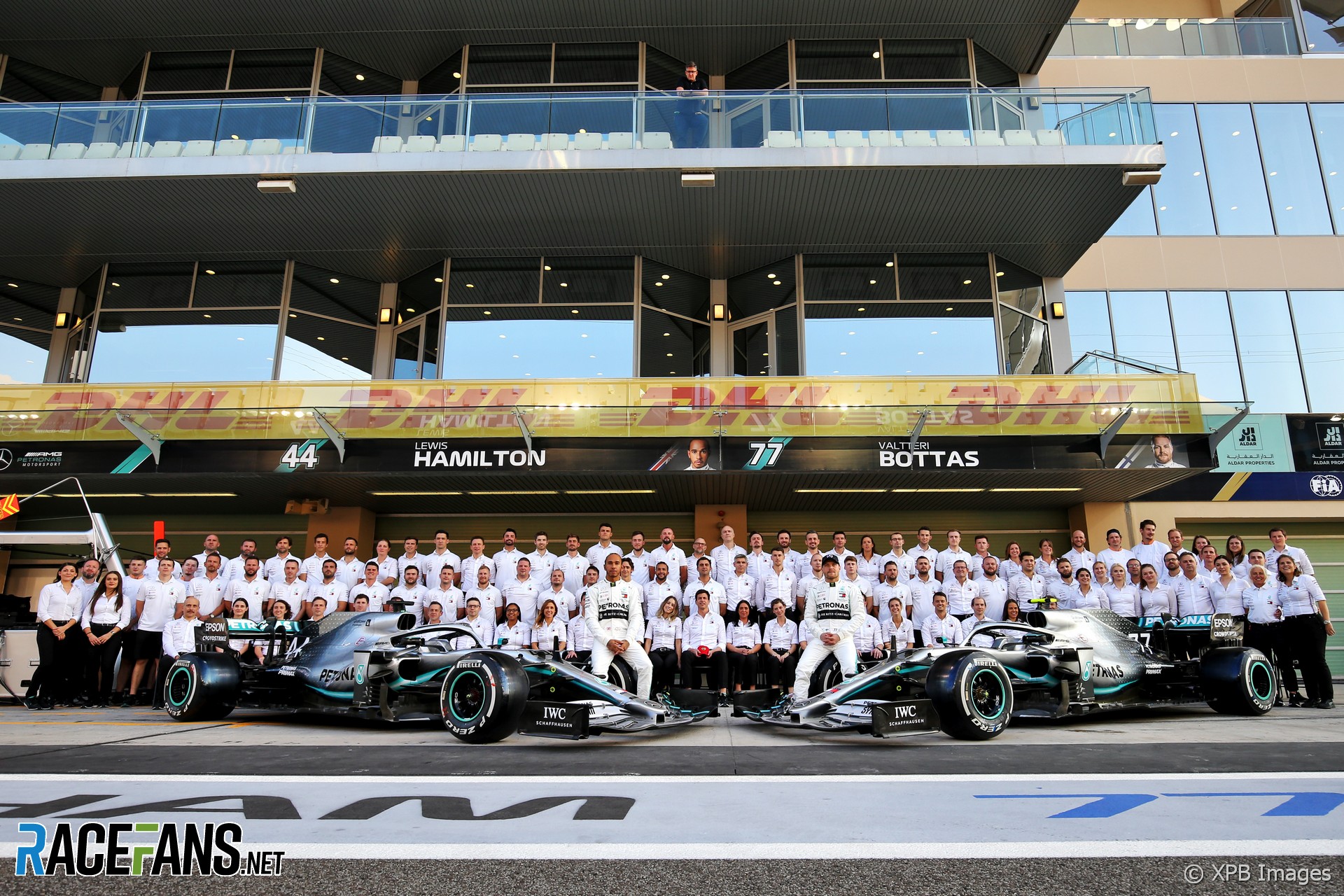 Writing in Revolution, a publication produced by the governing body of British motor racing Motorsport UK, Hamilton said the lack of diversity evident in F1 teams’ group photographs shows how the sport needs to change.

Motorsport UK chairman David Richards, a former Formula 1 team principal, told the same publication motor racing is “far from” being fully inclusive. He believes it must “reduce the barriers to entry and embrace diversity” between races, genders and competitors with disabilities.

Hamilton’s Mercedes team has already announced it intends to launch a new programme to improve diversity among its organisation. In June it revealed only 12% of its team members are women and 3% are from minority ethnic backgrounds.

While Hamilton said he has “always felt isolated as the only black driver in F1”, he is more concerned by the slow pace of progress being made in improving diversity than the racism he has encountered.

“While I have experienced racism during my career, it is the lack of awareness and action to combat it which was the most concerning,” said Hamilton. “At first, I thought my success could help to change that, to show that someone who looked like me could have a career in motorsport. But I soon realised it was not good enough for me to win if nothing in the background of the sport changes.

“Looking at team photos at the end of last season, there were very few people of colour. It seems if you are male and white than you take centre stage and black and female engineers are virtually non-existent. I often get asked about where the next black driver is coming from, but it isn’t just about the drivers – after all we are just a small part of the sport. The truth is, people of colour and female team members are hugely under-represented within the paddock and in factories too.”

Hamilton intends his commission to encourage more non-white students to take up technical subjects which can lead to careers in motor racing.

“I was also surprised by the effect the lack of diverse students pursuing science, technology, engineering and maths (STEM) is having on motorsport,” said Hamilton. “The barriers facing many students from minority backgrounds in pursuing STEM subjects throughout the education process are significant. This directly relates to the inclusivity we see in our teams, as many don’t know the careers subjects like engineering can lead to. The future of the industry relies on us ensuring we keep diverse talent on their journey to motorsport.

“That is why I recently announced the Hamilton Commission, my research partnership with the Royal Academy of Engineering. The research will explore how motorsport can be used to engage more young people from black backgrounds with STEM subjects and, ultimately, employ them within our Formula 1 teams. While this report is focused specifically on young black people, I hope the Hamilton Commission will act as a guide for all teams and organisations who want to investigate issues of racial inequality.”

The high cost of grass roots motorsport such as karting presents another obstacle to competitors from non-traditional backgrounds, Hamilton added.

“I was able to overcome those odds through the support of my father and his sacrifices, but sadly not everyone is that lucky and we urgently should look at how we lower the costs associated with karting.”

Writing in the same publication, Richards said Hamilton’s arrival in Formula 1 has been “nothing short of a miracle given all of the challenges they faced” earlier in his career.

“I remember all too well the early days of karting with Lewis and his father, Anthony,” he said. “It never occurred to me at the time that Lewis felt like an outside, let alone the racial abuse he was experiencing behind the scenes.”

“Unless we recognise the reality of the situation things will never change and I trust that all in our sport would agree that what happened to Lewis is unacceptable,” he added.

Richards believes motorsport “has the opportunity to be totally inclusive, but we are far from that today.”

“We have tried numerous initiatives to get more women racing and things are improving, yet they still represent only 9% of our licence holders,” he said. “Those with disabilities find that barriers to participation are there at every turn. We might claim to embrace diversity, but we still have a long way to go.”

Hamilton has repeatedly drawn attention to issues of racism and diversity, and urged rival teams to demonstrate the steps they are taking to make their workforces more inclusive.

“We, the governing body, need to take advantage of the momentum that Lewis has created to look far deeper into our organisation and ask ourselves searching question about how we reduce the barriers to entry and embrace diversity in all its forms,” said Richards.

“But it is up to each and every one of us, within the motorsport community, to ensure the cultural change required is something that we all embrace.”

Richards believes this should not be achieved through new regulations, but promised Motorsport UK will “take a proactive approach to adopting new initiatives that lead to our sport becoming genuinely diverse, inclusive and welcoming for everyone.”