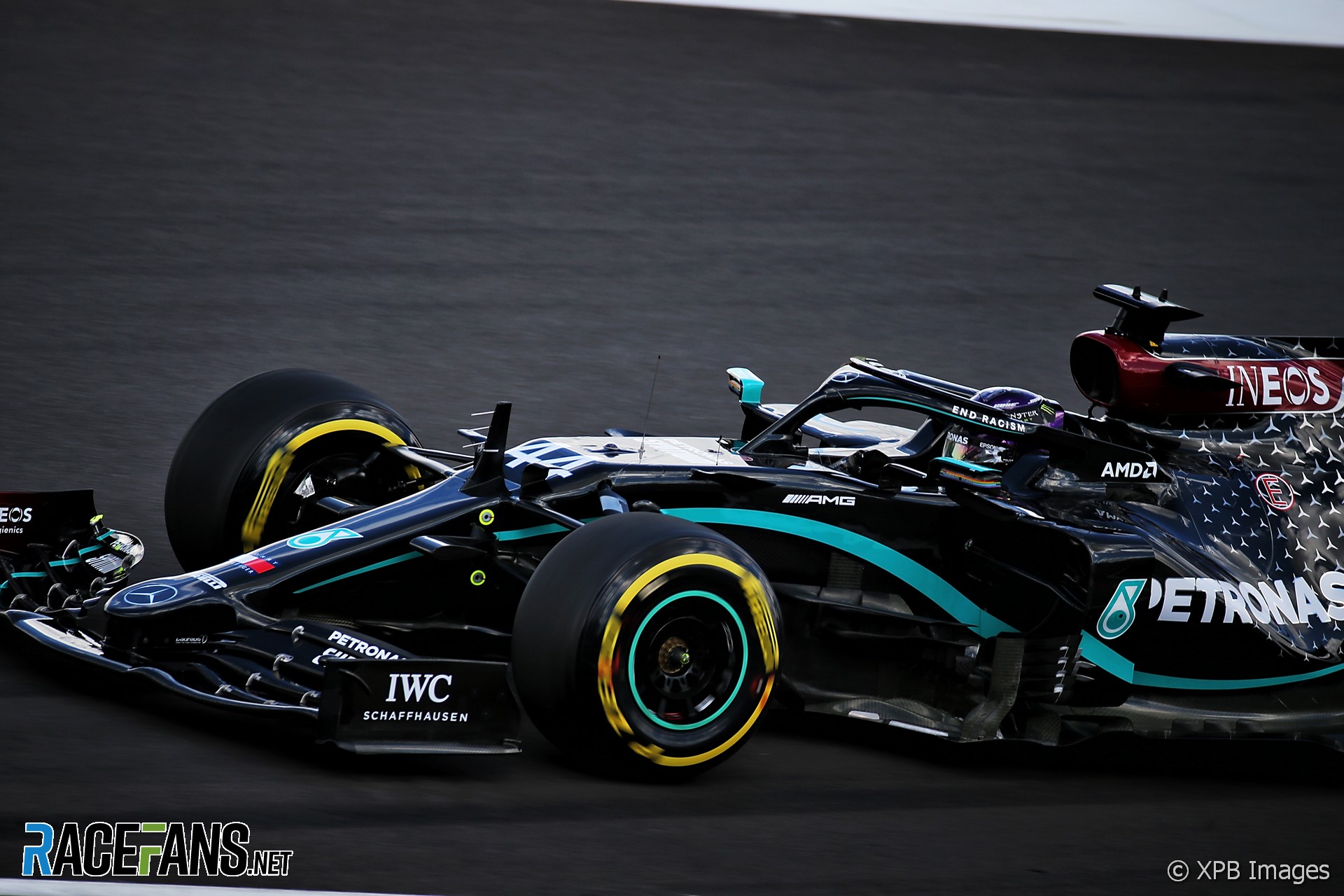 Mercedes were almost a full second clear of the field in Hungary – only Lance Stroll’s Racing Point prevented them putting at least 60 seconds on every car on the grid.

There’s no sugar-coating these statistics. Being this far ahead of the competition does not bode well for the standard of competition in the season ahead. Just as the 2016-16 championships were contested exclusively by Mercedes’ drivers, the season looks set to deliver more of the same, albeit with Valtteri Bottas now in the position formerly occupied by Nico Rosberg.

This will put a renewed focus on how Mercedes operate their cars’ strategies. How far may their drivers go to get a tactical advantage over the other guy?

The two Mercedes occupied the front row of the grid 12 months ago, but that time Bottas was ahead. Hamilton’s early attempt to pass him was repelled, but when Bottas pitted Hamilton stayed out longer in an attempt to gain the strategic upper hand. As things turned out, the Safety Car made an appearance, and Hamilton was able to secure his lead in the pits.

While Mercedes are unwilling to let their drivers pursue radically different strategies, this avenue is open to Bottas, assuming he holds second behind his team mate at the start.

“We will do what we have always done,” said team principal Toto Wolff. “It’s the car leading that will have priority on the stop. And if the second place car wants to get longer and can extract performance from his tyres that’s perfectly fine with our racing intent.”

Giving their drivers greater strategic freedom isn’t an option because teams only have one pit box each, rather than one per driver, according to Mercedes’ trackside operations director Andrew Shovlin.

“The way that we run a race is you prioritise the guy who’s leading and you optimise his race, and then once he’s done a stop, we can then optimise the guy behind.

“You can’t run them like we would if we’re racing Ferrari or Red Bull because we’ve only got one pit stop crew and one box. So every team has to have some sort of mechanism for doing that.”

However unlike by the Hungaroring, where races tend to be ‘follow my leader’ affairs, Silverstone offers possibilities for a driver in Bottas’s position, says Shovlin.

“It is a circuit that you can overtake on. It’s a circuit where managing the tyres is going to be key. It’s a circuit where we get a lot of incidents. There’s cars going off into the gravel and reaching the barriers and things. It’s rare that you get a processional race here and if our two are get together then neither will be assuming that it’s done and dusted until they get to the chequered flag.

Those hoping for an eventful fight for the lead will be wishing that comes true. The weather forecast is for a Mercedes-friendly 20C day with little chance of rain. The contest behind the two black cars is therefore where we’re likely to see the best action.

Max Verstappen may have an uneventful run to third place ahead of him, the Red Bull being too slow to catch the Mercedes and too quick for those behind to be a realistic threat. But his team mate Alexander Albon, who failed to make the cut for Q3, will again have to demonstrate his overtaking skill to recover the solid top five finish Red Bull surely expect.

Charles Leclerc and Lando Norris was the stars of qualifying, the former especially, whose “radical” Ferrari set-up appears to have delivered in terms of one-lap performance. He is very concerned about his race pace, and relieved to have got into Q3 using the medium compound tyre. Starting on that harder rubber should give him the advantage he needs to lead Norris home. Sebastian Vettel, meanwhile, has had a horrible weekend, with endless problems in practice contributing to a poor qualifying result.

The performance of the Racing Points in qualifying was something of a puzzle. Nico Hulkenberg was always going to find it hard going to get into Q3 on his short-notice return. But Lance Stroll, who did make the cut, was mystified at his lack of pace in the final stage of qualifying.

Will the pink cars be able to cut through the midfield as effectively as they did at the Red Bull Ring a few weeks ago? They’re likely to have a more eventful race than the two similar-looking black cars ahead of them.

Is today’s race going to be an all-Mercedes battle – or do you see a big surprise coming? And what’s caught your eye among the midfielders?

33 comments on “With little threat from outside, Mercedes have to manage “tensions” inside”