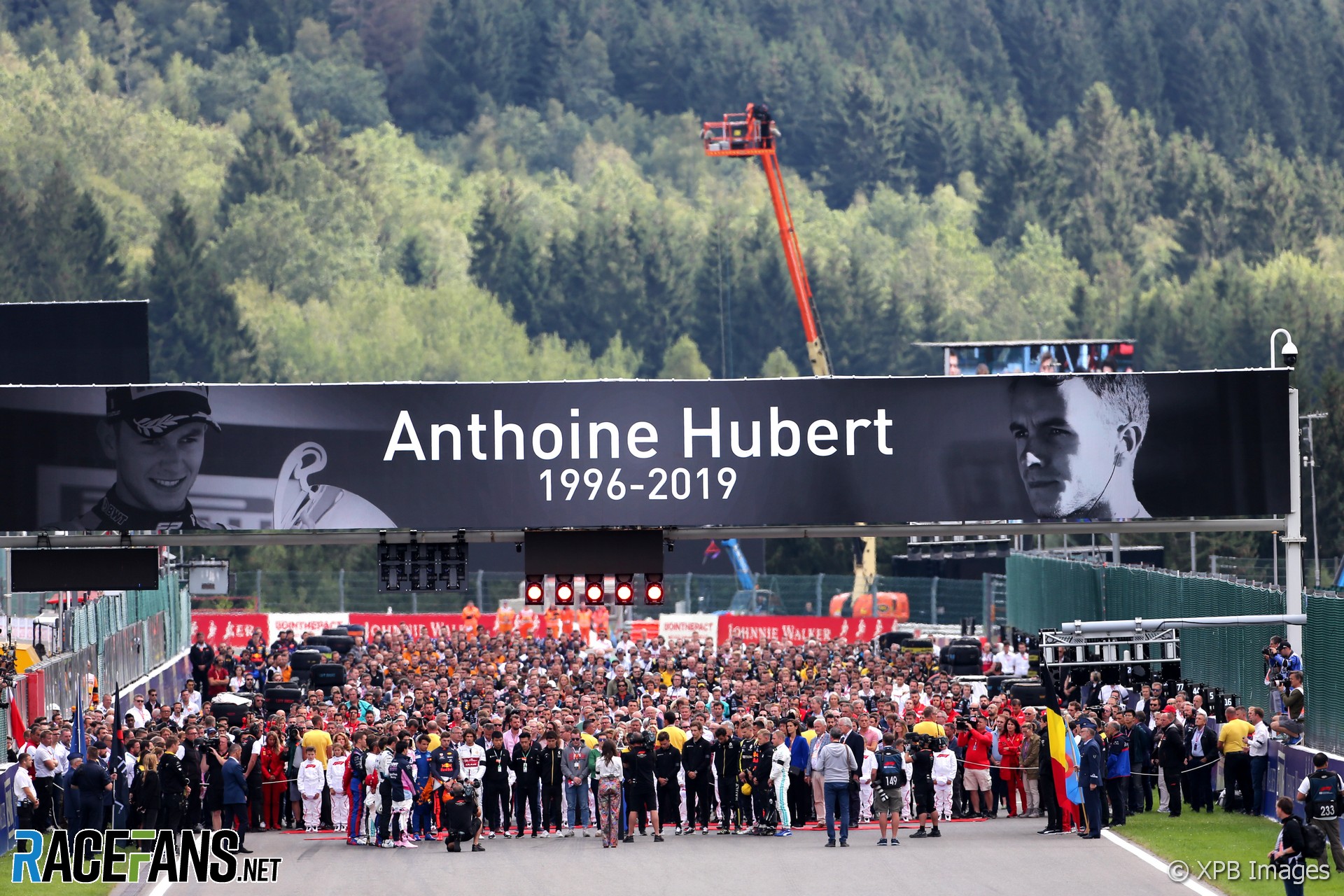 Modern motorsport essentially boils down to the pursuit of maximum speed with utmost safety, with the latter always taking precedence over the former regardless of circumstance.

It was not always thus, as photographs of pioneering drivers jostling for the lead in shirt sleeves and cloth caps attest. As recently as the eighties drivers’ feet were placed ahead of the front axle line to minimise wheelbase.

Back then HANS was a rather corny German comedian while halos were sported by angelic choirs. Supermarket product fire extinguishers were deemed sufficient to take on even the biggest blazes. Too many drivers perished after fire-fighting equipment proved defective or ill-trained marshals, oft dressed in casual clothes or raincoats, were unable to fight the flames.

While a modicum of progress was made in the wake of Jackie Stewart’s campaigns of the seventies, safety was a hard sell until 1994. The deaths of Roland Ratzenberger and Ayrton Senna on consecutive days at Imola changed F1 forever.

Suddenly motor racing faced an existential crisis, with governments threatening to ban the sport on their soil. Manufacturers no longer wished to be linked with motorsport and its inherent risks. Teams and suppliers feared litigation of the type Senna’s Williams team endured for 11 years before team members were acquitted.

Television broadcasters threatened to cancel contracts lest they offend viewers – Senna’s death was reckoned to be the most public in history, even if the driver officially passed away in hospital – while sponsors sought exit clauses lest their goods and services were tainted by association with this lethal pastime. Fatalities in other high-profile series such as IndyCar, endurance racing and rally further ratcheted up the pressures.

While it would be disingenuous to suggest that the FIA as the sport’s regulator had previously been cavalier in its approach to safety, the fact is that safety research was and is horrifically expensive. The sport was then effectively run by well-meaning blazers and largely funded by memberships so there was no way the FIA had the funding required for comprehensive safety research. Plus, a sort of ‘WWII mentality’ towards death lingered, particularly among the sport’s older followers.

However, explosions in TV ratings across the globe and the (contentious) sales of the commercial rights to all FIA championships at the turn of this century provided the governing body with funding to undertake safety research.

The first major project was wheel tethers (1998) followed by HANS (2003) and visor panels – the latter in the wake of Felipe Massa’s 2009 crash at the Hungaroring, when the Ferrari driver was hit by a wayward spring. The halo, introduced in 2018, is the most recent visible safety innovation. However, cars and circuits incorporate other low-key or unseen innovations that raised standards to levels undreamed of in Stewart’s day.

By its nature, motorsport will never be 100% safe. But that is the FIA’s ultimate target. Until the end of 2017 safety studies were largely funded by the FIA Foundation and FIA Institute – established via the commercial rights sale – but thereafter the governing body under president Jean Todt launched the FIA Innovation Fund (FIF) using proceeds from the sale of 1% shareholding in the commercial rights holder.

From an initial grant of €45m provided by Todt’s administration, FIF now holds €63m in reserve and has funded 25 projects worth over €20m, with motorsport safety and allied activities accounting for a quarter (by value) of approved projects to date. Such contributions complement the ongoing funding from the FIA Foundation and the governing body itself.

The FIA’s Safety Department is led by its director, experienced motorsport engineer Adam Baker, formerly head of track and test at BMW Motorsport. He reports directly to Peter Bayer, FIA secretary-general for sport, with a recent appointment being that of Tim Malyon, an ex-Sauber and -Red Bull engineer with experience in Formula E and DTM now responsible for safety research.

In addition to this wealth of in-house expertise, the Safety Department regularly consults with industry working groups, accident specialists and bodies such as the Grand Prix Drivers Association, and monitors and analyses all fatal and serious accidents in global motorsport via the FIA’s World Accident Database. It also works closely with the recently founded FIA Industry Working Group.

The Industry Working Group, managed by the FIA Safety Department and reporting to the FIA Safety Commission, comprises over 50 members drawn from helmet and racing apparel manufacturers, circuit safety specialists, fuel system and electronics suppliers, applied technology companies, motor and allied manufacturers, and the Cranfield Impact Centre, an off-shoot of the university of the same name.

FIA protocols demands that National Sporting Authorities (ASNs) report all fatal accidents in their respective regions, whether these occurred in FIA-governed world championship events or at national or grassroots levels, in turn providing the Safety Department with a broad database.

Findings are reviewed by the FIA Serious Accident Study Group – chaired by Todt and comprising heads of all FIA sporting commissions and FIA sporting/technical departments – on a regular basis. Once approved, the appropriate commission president(s) – i.e. F1, Single Seater, WRC, WEC etc – commit to implementing the findings and corrective measures in their respective championships, usually via amendments to regulatory clauses.

“The aim of this Group is eventually to reduce the risk of accidents,” says FIA Medical Commission president and SASG deputy president Gerard Saillant, “and when an accident does occur, to reduce the physical consequences for the people concerned.”

The SASG works in conjunction with the FIA Research Working Group, which evaluates safety measures to complement the work of the Safety Commission – led by former Williams technical director Sir Patrick Head – which tables recommendations to the World Motor Sport Council, the FIA’s apex regulatory body.

Saillant stresses that the role of the Safety Commission is a regulatory one, being, “The last step before the World Motorsport Council. The SASG is more ‘on the ground’, plus works in liaison with various research groups within the FIA.”

Following a meeting in March, the SASG recently published the findings of 28 serious and fatal accidents that occurred in circuit racing during 2019 as reported by ASN in each country. Although we requested a list of accidents, FIA policy is not to release individual details due to certain sensitivities. However, it is clear from recommendations that followed in May this year that the research and analysis into each set of circumstances had been diligent.

While not specifically mentioned in SASG recommendations, it is obvious the F2 accident a year ago this weekend at Spa-Francorchamps, which claimed the life of Anthoine Hubert and left Juan Manuel Correa with serious leg injuries, was studied. As reported here, the FIA found no individual driver was responsible – although a deflating tyre [thought to have been punctured by debris from an earlier incident] on another car triggered the accident – formed part of the study. Alex Peroni’s aerobatic F3 crash at Monza a week later, in which he suffered back injuries, is another likely candidate for this analysis.

The FIA studies cover all categories ranging from karting through closed cockpit series such as touring cars and rallycross to closed road events such as rally and cross-country and all single seater formulae. The recommendations which apply to the latter are detailed below. The FIA has not indicated which measures have arisen from which incidents; equally, there are no implied suggestions that specific accidents resulted in certain of the measures.

The FIA recommendations include the following for single seater cars:

Debris containment: Mitigate and/or prevent debris from cars during accidents via tethering and design solutions.

Passive safety structure and survival cell: A review of front and side impact structures with respect to energy absorption, directional performance and compatibility with car-to-car impact. This process is underway for Formula 1/4/E, with solutions for Formula 2/3 incorporated into the next car updates.

Front wing design and attachment: A review of design and wing-to-nose attachment systems to mitigate loss of assemblies. Establish whether future cars could incorporate wing designs with ‘controlled failure’ points.

Headrest design – Iterate design and specifications to increase robustness of retention and increase probability that headrest remains in situ during impact.

Front anti-intrusion panel – After success with retrofit upgrades to current cars, latest specification of panels to incorporated into next generation cars.

The following are also under consideration for all categories:

Tyre pressure monitoring systems: Already in use in senior series, to be deployed in additional categories.

Other potential operational changes being examined include:

Race neutralisation: Development of an in-car marshalling systems able to be installed and removed from cars during events.

“As with all accident investigation work, our findings related to circuit racing form the basis of a range of technical and operational initiatives, both to prevent serious accidents occurring and to mitigate the consequences if they do.” Baker said.

Clearly not all recommendations can be incorporated immediately, and here ‘next regulation change’ philosophies have been adopted. However, Baker emphasises that 98% of fatal accidents in contemporary motorsport occur at amateur level, with the most commonly identified contributory factors pointing to a need for improved marshalling training and race neutralisation (circuit racing). These are human elements.

Clearly motorsport safety has progressed in leaps and bounds since Stewart’s crusading days, with reporting, analysis and simulation providing the cornerstones of what will always be work in progress, a never-ending quest that could not exist without a safety-first culture at all levels, and, crucially, generous funding from the sale of the FIA’s commercial rights to various championships – with F1 being by far the largest benefactor.

Todt, who presides over a portfolio comprising motorsport on one hand and mobility (road transportation) on the other, believes fervently that motorsport safety and road safety are symbiotically interlinked in that lessons learned from one discipline can (and should) be applied to the other, and vice versa.

“For me,” he told RaceFans in an exclusive interview earlier this year, “if we can make it safer, circuits safer, motor racing safer, there is no [let-up] on this side. It will never be enough. Maybe the difference, we must optimise more [in] motor racing, not only on safety but on technology as well, to have some [relevance] on mobility. On road safety, road cars, whatever.

“I don’t think now even manufacturers can afford to move into motor racing if it is not linked with other consequences,” added Todt, the UN Special Envoy for Road Safety.

Although the FIA’s focus will always be on motorsport’s premier categories, it is clear from the depth and breadth of research undertaken by the FIA Safety Department that the governing body leaves no stone unturned in its unrelenting mission for zero fatalities in all categories of what is by definition an extremely dangerous activity. It is, though, immeasurably safer than in Stewart’s day and destined to be even safer in future.