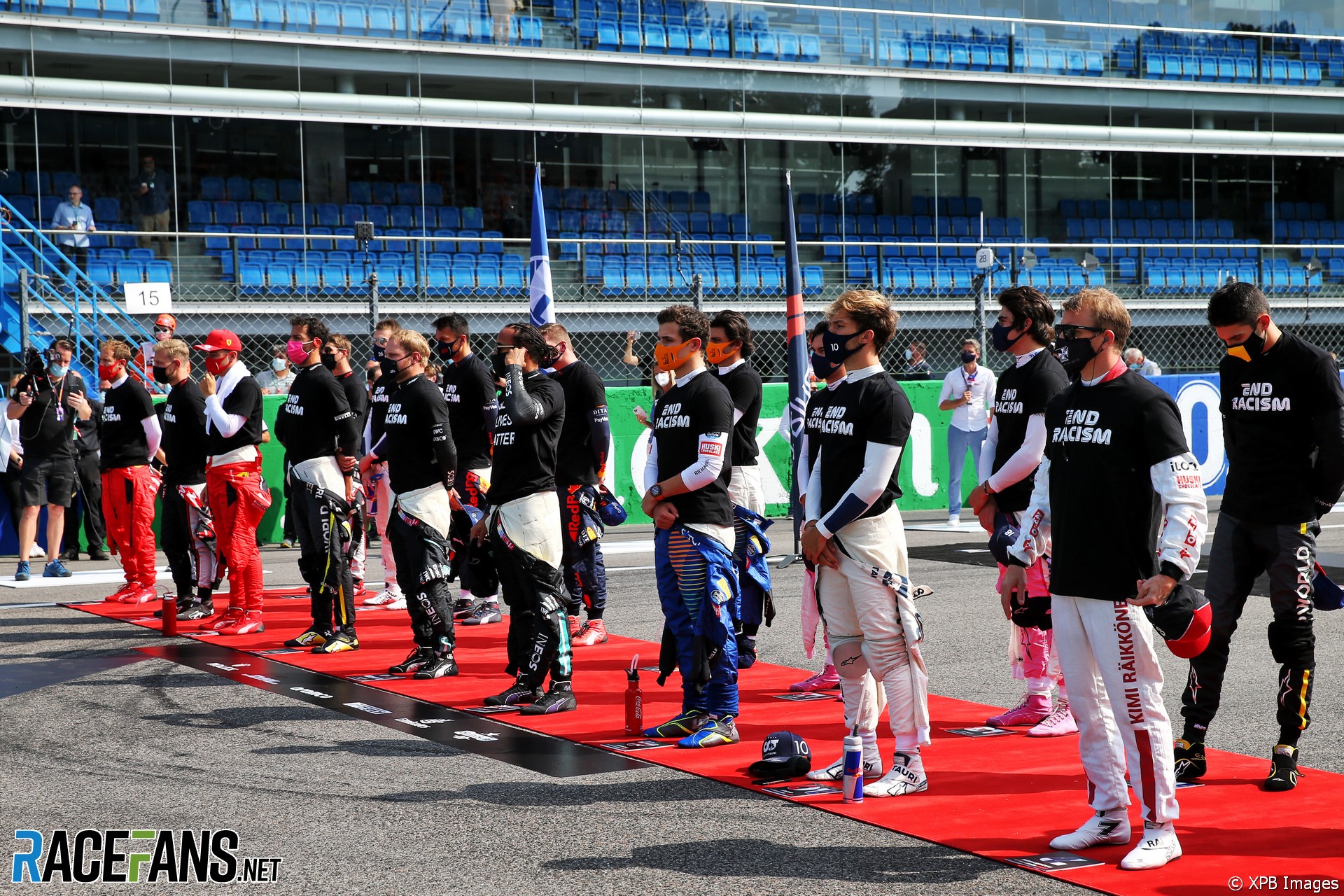 In the round-up: Lewis Hamilton says it’s “not the end of the world” that he missed taking a knee at yesterday’s pre-race ‘end racism observance’.

Hamilton and Sebastian Vettel were both absent from the pre-race end racism observance when it was shown during the broadcast of yesterday’s race:

[It was] just timing. I went back to my garage, it’s the furthest away. I took the scooter back and just basically ran out of time. I thought I left to come back in time. Usually I’m guided of when to leave, I left when I was told to leave the garage to come back. By the time I got back, everyone had already taken the knee.

So definitely I missed it. But it’s not the end of the world. I got to see that my team continued to take the knee, which I think is great. And we’ll just try to do better with timing next time. Perhaps I won’t go all the way back to my garage when it’s that far away. In the past, usually there is another toilet somewhere closer.

Thinking of my pal Jonathan Williams today, no one has done more to keep the glorious history of @WilliamsRacing alive than him with his #WilliamsHeritage team, or has a more encyclopaedic knowledge of their history.

When people talk about domination in #F1, they once meant these guys. @WilliamsRacing won five constructors' titles in six years from 1992 to 1997.

It's the end of an era: The 740th and final race for the family in charge of the team which has won 114 races since its debut. pic.twitter.com/gJCDFgrUB9

The @WilliamsRacing name may stay on, but this race truly marks the end of an era. Immense sadness as I walked past the trucks ahead of race. pic.twitter.com/JTsmLSRV3V

Well that was different to any of the race sims last night. #MonzaGP #podium pic.twitter.com/4h4jIyZAc8

Charles and Seb both retire (Ferrari)

Mattia Binotto: "It’s even more disappointing that Sebastian’s retirement was down to a lack of reliability on the car. Problems like that, in this case with the brake system, should not happen."

Lance on the podium after Monza magic! (Racing Point)

"It’s been a disappointing day. Anything that could go wrong seemed to happen to us."

Franz Todt: "Strategy-wise, the team did a fantastic job in deciding to bring him in one lap before the safety car was deployed. Of course, we didn’t know this at that time, but at the end this was exactly the right call because at the restart of the race he was in third and was able to overtake Stroll into turn one."

George Russell: "It was an unfortunate race and we were unlucky not to pit before the red flag. The car was feeling really good, we were just slow on the straight. Every time I overtook a car, they just passed me on the straight"

"I had to pit, came back out with a new front-wing, and I had really, really good pace. We didn’t expect to have that level of pace. That makes it even harder to be out of the race so early."

A rollercoaster of emotions (Alfa Romeo)

Kimi Raikkonen: "It was a very disappointing result in the end but there was nothing we could really do. We only had soft tyres left at the red flag, after using mediums at the start, which effectively put us in a very difficult position."

So when they put sister-brand Infiniti on the Red Bull cars Renault weren’t happy. And now that they have their own respectable team.. they put Alpine one it.

I don’t get it. The Renault brand is way more connected to Formula 1. Most people remotely interested in F1 know about the 2005 and 2006 seasons and Renaults succes. Besides, Renault mostly only hurt their reputation between 2014 and 2018 with slow-unreliable engines. From 2019 onwards they fixed that – they are a respectable team now. Why wouldn’t they want the Renault-brand to benefit from that?
HK (@Me4me)

Happy birthday to Stephen and F1Sauber!