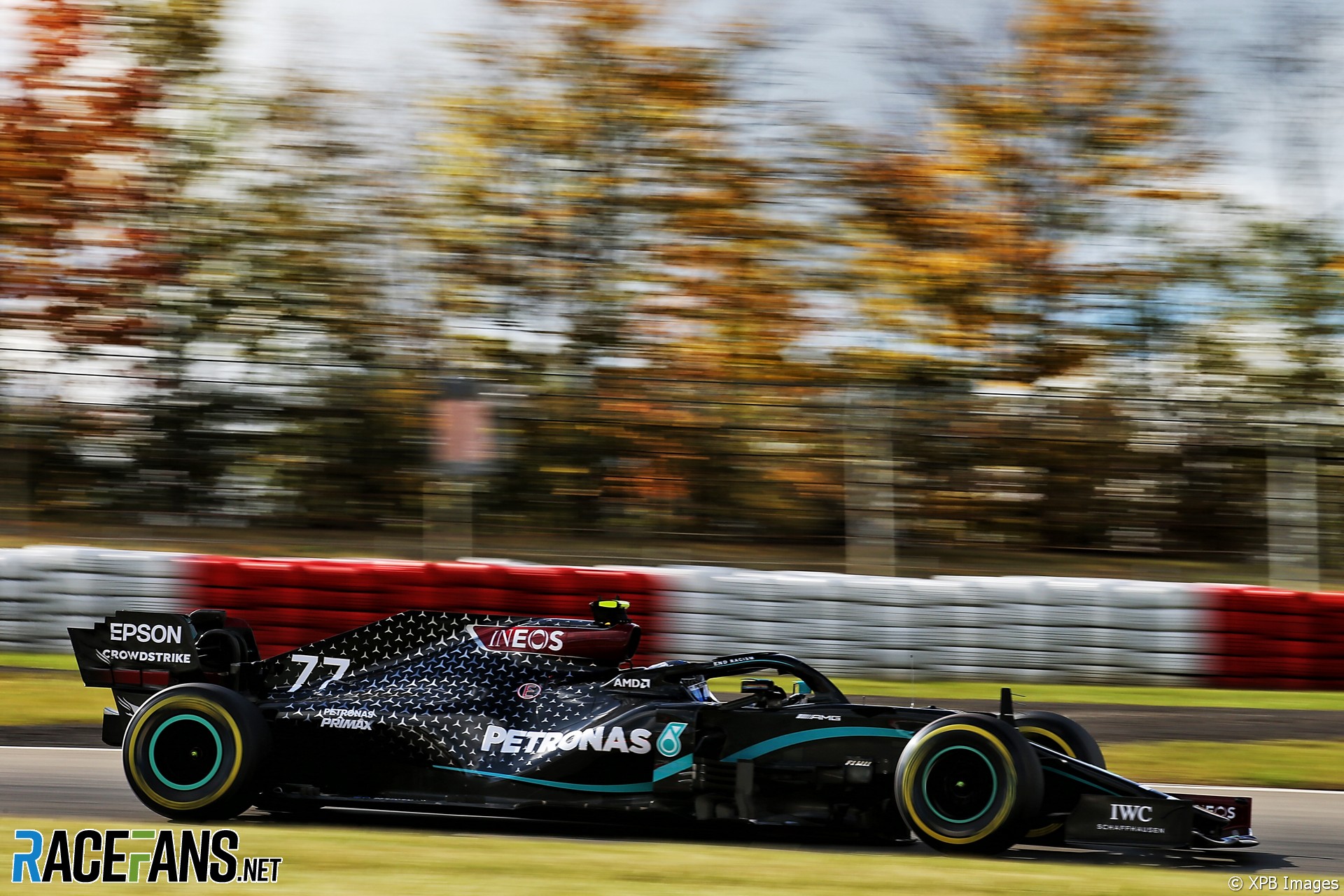 The Mercedes drivers saw off a strong challenge from Max Verstappen in qualifying for the Eifel Grand Prix. Valtteri Bottas claimed pole position ahead of team mate Lewis Hamilton with his last lap of the session.

While 19 drivers carried on with their programme from the morning, Nico Hulkenberg had 20 minutes to acquaint himself with a car he last drove two months ago. This he had to accomplish while jockeying for position with other drivers – he went into the chicane side-by-side with Carlos Sainz Jnr at one point, trying unsuccessfully to ensure he didn’t lose track position to the McLaren driver.

That compromised the beginning of his first timed run, which left him at the bottom of the times, seven-tenths of a second off the next-slowest driver. But with team mate Sergio Perez only safe by seven-thousandths of a second after the first runs, it was clear the substitute faced a huge challenge to progress beyond Q1.

Perez, George Russell and the Haas driver were covered by a mere 11 thousandths of a second, straddling the drop zone, giving all a strong incentive to improve on their final efforts. Haas sent their drivers out early to avoid the risk of encountering yellow flags. Romain Grosjean initially moved up to fifth but his time was deleted for a track limits infringement, but Kevin Magnussen moved clear of the drop zone with the sixth-fastest time.

Max Verstappen set the initial pace, followed by the Mercedes drivers and Charles Leclerc, Ferrari continuing their encouraging form from practice. Those four did not return to the track for a final run. Lando Norris and Daniel Ricciardo did, relegating Leclerc to sixth, followed by Pierre Gasly. The AlphaTauri driver had to be stopped on his way out of the pits as part of the garage floor wrapped itself around his wheel.

Hulkenberg improved again after returning to the track, moving within three-tenths of a second of Perez, until his team mate’s last effort moved him up to ninth place. Hulkenberg couldn’t match that on his final run. He set personal best times in the first two sectors, but wasn’t on course to reach Q2, and then lost more time with a lock-up at the Veedol chicane.

Antonio Giovinazzi’s final run proved good enough for 15th, just two-hundredths of a second ahead of Grosjean. Both Williams drivers also missed the cut along with Kimi Raikkonen, who will join Hulkenberg on the back row of the grid.

Despite the cold conditions, several drivers opted to start Q2 on medium tyres. Both Mercedes, both Ferraris and Daniel Ricciardo opted for the harder rubber. However Valtteri Bottas, Charles Leclerc and Daniel Ricciardo could only scrape into the bottom of the top 10, and Sebastian Vettel didn’t make it at all. Only Lewis Hamilton managed a sufficiently quick lap, setting the second-quickest time behind Max Verstappen’s soft-shod Red Bull.

The Mercedes pair returned to the track on softs. Bottas moved up to second, a quarter of a second down on Verstappen, but Hamilton was four tenths of a second faster than his team mate in the first sector alone. He lost some time in the middle of the lap, but was still able to go quick enough by three-tenths over Verstappen.

The other drivers who tried the medium tyres also switched to softs for their last runs. But despite the change, Vettel remained unable to break into the top 10. it wasn’t close, either: When he asked his race engineer how close he’d come to making it, Vettel was told Esteban Ocon was almost three-tenths of a second quicker.

Vettel was joined in elimination by the two Ferrari customers

Verstappen surprised the Mercedes drivers at the beginning of Q3. The Red Bull driver demoted the two black cars to second and third, Bottas a mere 13 thousandths of a second ahead of his team mate.

However Verstappen’s hopes of becoming the first non-Mercedes driver to start from pole position this year looked in danger as soon as the second runs began. Hamilton, leading the way, was immediately quicker than his previous run – and further back Bottas was faster still.

Hamilton was the first of the two to hit the top of the times, but Bottas has the edge on him in both of the first two sectors. Pole went to him by two-tenths of a second, while Verstappen could not respond. “I just didn’t have the grip in Q3,” he said.

Albon had been fourth before the final runs began, but he lost the place after a superb final effort by Leclerc. The Ferrari driver claimed fourth on the grid by just 12 thousandths of a second.

The Renault pair came next, while Perez split the McLarens at the bottom end of the top 10.