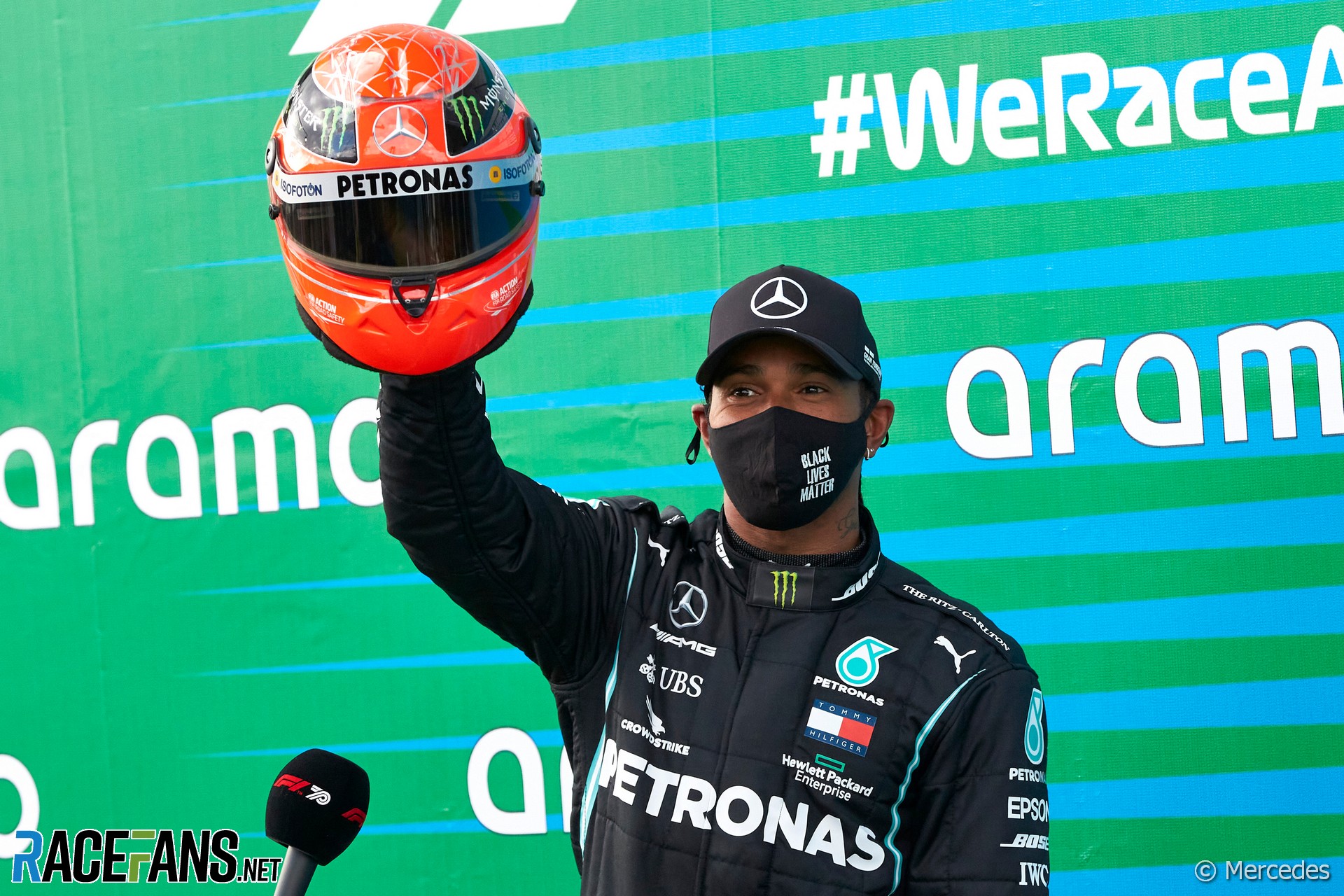 The Mercedes driver, who has long been expected to reach Schumacher’s benchmark, spoke at length about his respect for the sport’s most successful driver in the press conference after his victory in the Eifel Grand Prix.

“Naturally everyone knows that he is an icon and a legend of the sport,” he said. “What he achieved in so many areas, pushing the limit in terms of the physicality side, he really was a pioneer in being the fittest driver at the time.

“What he did for both the teams that he was at, particularly at Ferrari, was just remarkable.”

Hamilton replaced Schumacher at Mercedes in 2013. At the end of his first year at the team Hamilton had won 22 races. Since the V6 hybrid turbo era began Hamilton has won 69 times to equal Schumacher’s benchmark.

“That number is so big and when it’s so far away it’s hard for people to perhaps fully understand how hard it was for him to have got those 91 wins,” said Hamilton. “To deliver, weekend in, weekend out, year on year and stay so in shape and so precise. I understand that now more than ever.

“I can only tell you that it doesn’t get easier. From your first win to the 91st I’m telling you it’s been a long, hard run.”

Following his win Schumacher’s son Mick present Hamilton with one of his father’s helmets in recognition of his achievement.

“I actually already have one of Michael’s helmets,” said Hamilton. “One of the really, really special moments for me was in Abu Dhabi 2012 I went over to the Mercedes hospitality and met with Michael. We exchanged helmets and that was, for me, a moment that I’ll never forget.

“To stand with someone that I grew up watching on TV and having the honour of exchanging jerseys or helmets it’s what us sportsmen do and it’s the highest sign of respect that you can really, I think, show. So to have the legend of the sport do that with me was really special.

“To have his family honour me today, I’m just incredibly humbled. His son is such a great, bright talent, a really genuine human being. Michael’s obviously raised a great man in him and I look forward to seeing how his career will look moving forward. But now I’m going to have two special helmets from Michael in my small living room.”

Mercedes race team coordinator Stephen Lord, who has worked with Hamilton since the pair were at McLaren, joined him on the podium today.

“The journey that you go on with so many people is what really matters and what really counts. And of course, the number is great.

“But I think what we collectively have done, I’m just unbelievably grateful to Mercedes for giving a young black boy a chance when I was 13 years old and supported me all the way.”