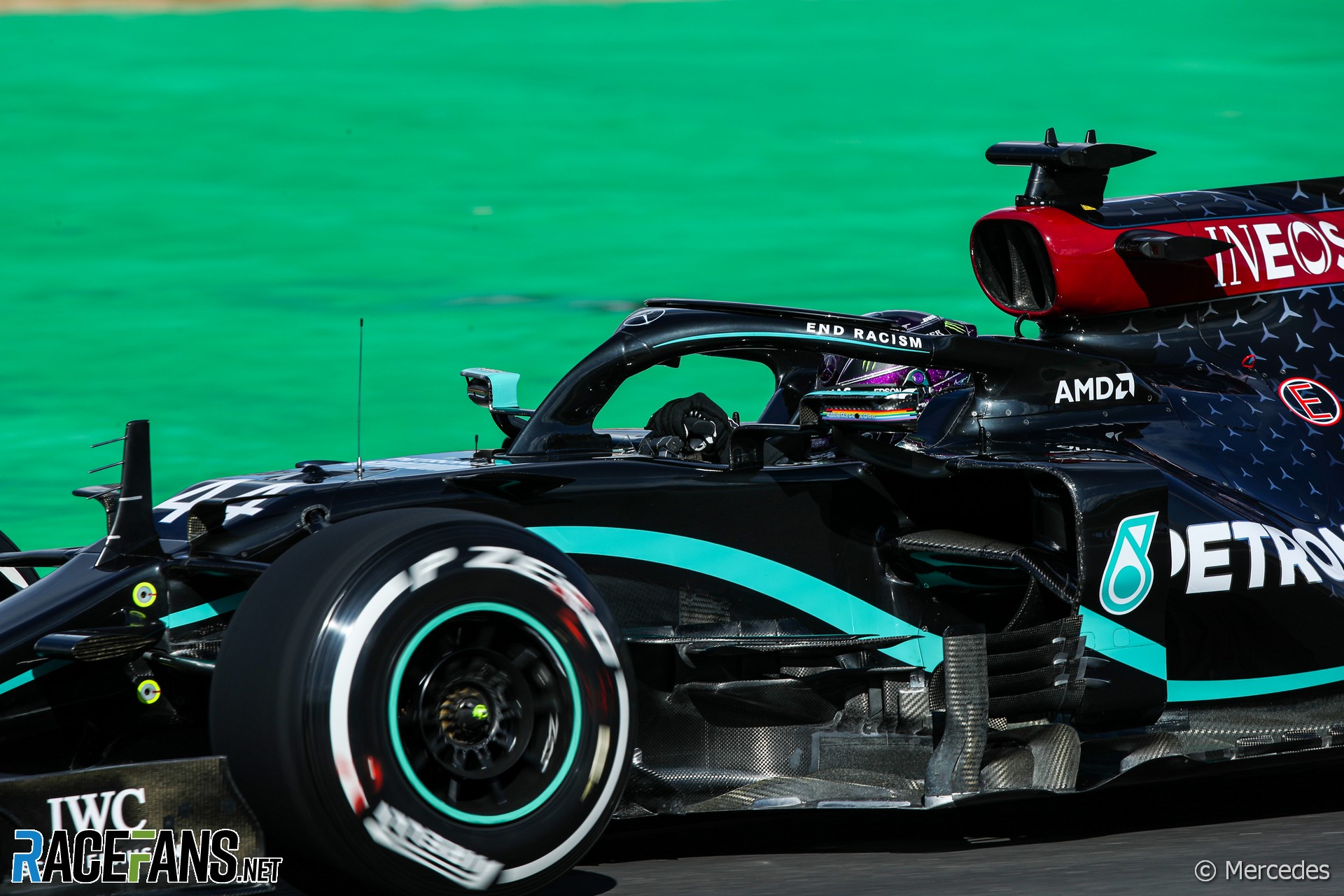 Lewis Hamilton mastered a tricky track surface at Autodromo do Algarve to beat his team mate to pole position for the Portuguese Grand Prix.

Valtteri Bottas, who led all three practice sessions before qualifying, was relegated to second place ahead of Max Verstappen.

Qualifying began half an hour later than planned due to track repairs after a drain cover was damaged at the end of the final practice session.

The first stage of qualifying set the scene for an intriguing fight for pole position. Verstappen ran wide on an early effort, then put together a clean lap which lifted him ahead of the Mercedes. Hamilton had more in hand, however, and claimed the top spot back. But little more than a tenth separated the pair of them and third-placed Valtteri Bottas.

This opening skirmish was inconsequential – the real contest was over who would make it into the second round of qualifying. Romain Grosjean, who complained of understeer on his first run, initially held the last place in Q2, narrowly ahead of Antonio Giovinazzi.

On the low-grip circuit, drivers found even the soft tyres took a few laps to give the best grip, so the final runs began several minutes before the chequered flag was due to appear.

George Russell’s first run left him slightly off a place in the final 15. But once again he put his best sectors again on his final lap, and secured his place in Q2. “My bum was twitching a little bit then,” he admitted on his way back into the pits.

The Williams driver made it through comfortably, over two-tenths of a second ahead of the Alfa Romeo pair. Kimi Raikkonen’s last effort was deleted for a track limits infringement at turn one. The Haas drivers also dropped out, while Russell’s team mate Nicholas Latifi brought up the rear.

Mercedes and Ferrari were the only teams to make an attempt to start the race on the medium compound tyres, both sending their drivers out on the harder rubber. Bottas immediately produced the fastest lap of the weekend so far, while Hamilton slotted in three tenths of a second behind after spoiling one lap locking a wheel behind Vettel.

The Ferrari drivers couldn’t muster the speed to reach the top 10 on his medium tyres and initially held 14th, with only Russel behind him. Charles Leclerc lapped over seven-tenths of a second faster than his team mate on his first run, matching Pierre Gasly to within a thousandth of a second.

Red Bull opted for softs but couldn’t match the Mercedes drivers on the red-coloured rubber, Verstappen ending up six-tenths down on Bottas. Albon was three-tenths of a second behind, but that left him down in ninth.

Albon found little gain on his final runs, complaining he caught traffic at one stage. “You need to tell me when there’s a car in front,” he told his team, “that was way too close.”

Daniel Ricciardo also encountered traffic on his run, including his team mate, at the apex of turn 11. Ricciardo ran wide, the car swapped ends on him, and skidded backwards through the gravel, nudging the barrier with its rear wing. Nonetheless he was narrowly inside the top 10, while Ocon went out in 11th.

He was joined in elimination by Lance Stroll, Daniil Kvyat, Russell and Vettel. “The tyres were not ready,” said the Ferrari driver after exiting Q2 in last places. “I struggled to get the fronts warming up.” His Q2 lap was over six-tenths of a second slower than his Q1

Bottas narrowly led Hamilton after their first runs on the soft tyres but both Mercedes drivers switched to the medium rubber for their last runs. However they both opted for different tyre warm-up plans.

Bottas did a single flying lap, and set a best effort of 1’16.754. Hamilton had slipped to third behind Verstappen as he got stuck into his final lap, but the extra run on his tyres had left them in spot-on condition, and he found a tenth of a second to secure pole position.

Verstappen took third, half a second quicker than Albon, who was not pleased with his team mate after their first runs. He was compromised by Verstappen on the way in to turn 14, as Verstappen picked up a tow from him on the pit straight as he began his flying lap. “It wasn’t very fair,” complained Albon on the radio.

Another superb qualifying performance by Leclerc put his Ferrari in fourth – 11 places ahead of Vettel. Perez also beat Albon, relegating the Red Bull driver to sixth.

The McLaren pair swept the fourth row of the grid ahead of Gasly and Ricciardo, the latter unable to join the session due to the damage he incurred in Q2.