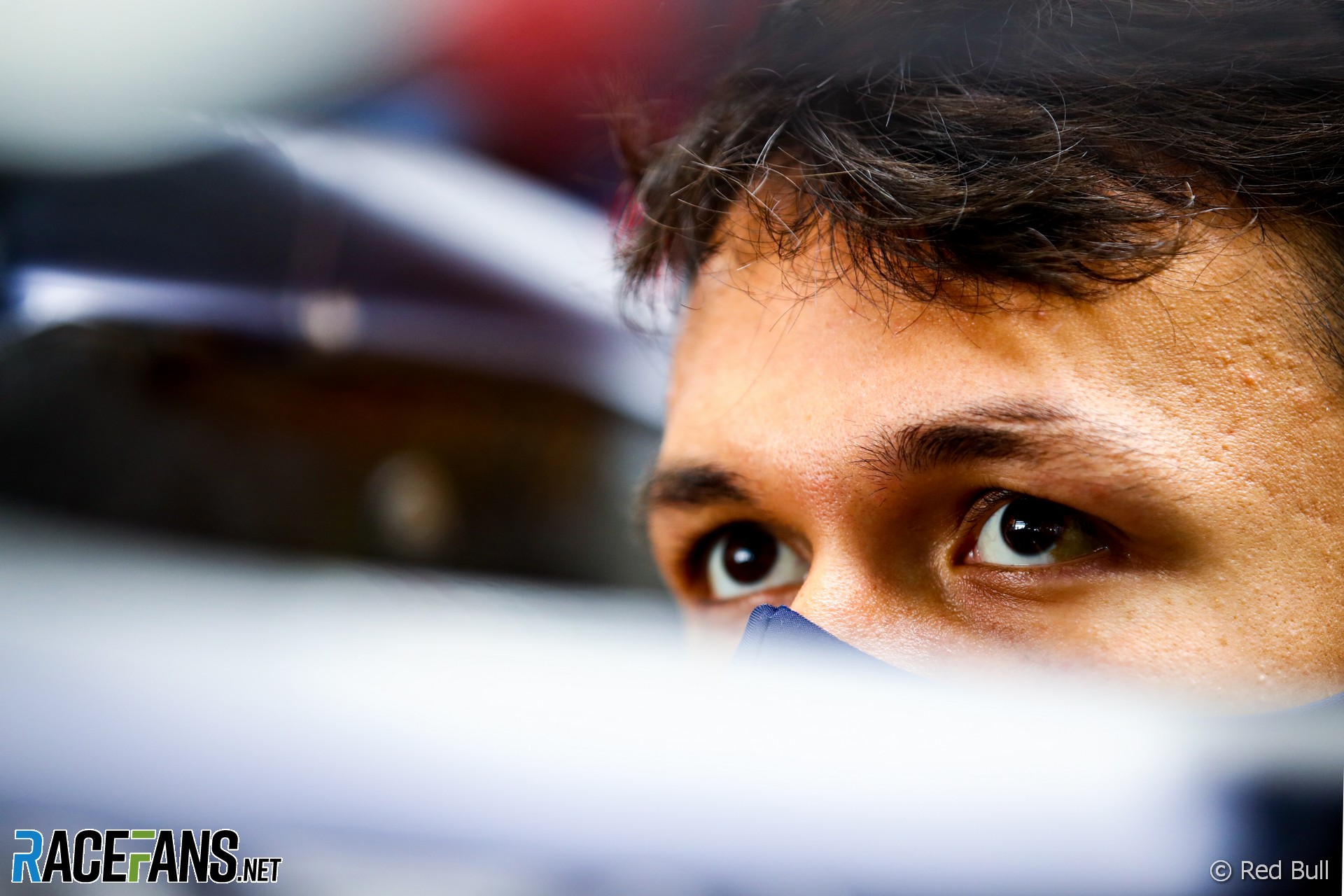 Formula 1 heads to Imola for the first time since 2006 this weekend.

Only one driver on the grid has raced on this track in F1 before, but it’s had several significant upgrades and corner changes since then. Several other drivers on the grid have raced this new configuration in junior series.

Adding to the challenge to drivers and teams this weekend, there will be no Friday running and just a single, 90-minute practice session on Saturday morning.

But one driver is under considerably more pressure than others ahead of the Emilia-Romagna Grand Prix.

Alexander Albon was given two races to make his case for staying at Red Bull next year before the last round in Portugal. Imola will be his second chance, after a fairly disastrous outing at Portimao, which saw him finish outside the points once again.

Arguably Albon’s strategy in Portugal was compromised by an early stop made before it was clear how long a stint might last. Having dropped behind Kimi Raikkonen he was unable to recover places and finished behind most of the jumbled midfield, unlike earlier races in the season.

But Albon needs a points finish at Imola to avoid any further embarrassment in the standings, let alone secure next year’s contract. The limited pre-race practice running means he has less time than usual to get on top of the RB16’s tricky handling this weekend.

Mercedes are practically guaranteed to win the constructors’ championship this weekend, unless they somehow fail to score while Red Bull get both cars on the podium. Once done, they will have scored a record-breaking seventh consecutive constructors’ championship title. They jointly hold the current record of six with Ferrari, who won six titles in a row from 1999 to 2004.

Since F1’s last visit in 2006, Imola has been reconfigured. The track was emasculated by chicanes in 1995 following the crashes the previous year which claimed the lives of Ayrton Senna and Roland Ratzenberger.

The chicanes installed at the corners where the two drivers died – Tamburello and Villeneuve – remain. However the chicanes prior to the pit straight have gone, making the approach to Tamburello much longer and faster. The track’s single DRS zone will be positioned here, beginning at the finishing line.

Other safety upgrades have been made, as Formula 1 race director Michael Masi explained: “Asked about the changes, Masi said, “There have been a great number of safety changes that have happened, particularly the upgrading of barriers and so forth, all the way around the venue itself, together with the Imola circuit and from the updates that I’ve received, they’ve come along extremely well.

“There’s no concerns at all, from a safety perspective, that I have at the moment and having done a recent inspection there, with the planning of all these safety upgrades, I’m looking forward to getting there and the inaugural two-day event.”

Kimi Raikkonen is the only current F1 driver to have raced Imola in the top category, from 2001 until 2006, when the circuit hosted the San Marino Grand Prix.

He was on course to win in 2005 before retiring, so his best place remains the second place finish he scored for McLaren in 2003. Unusually, the podium that day was a champagne-free affair out of respect to race winner Michael Schumacher and fourth-placed brother Ralf, whose mother had died just hours before the race.

Many of the other drivers have experience of the circuit from other categories. Lewis Hamilton had his second weekend in GP2 there, in 2006, but was disqualified from the feature race for overtaking the Safety Car.

Max Verstappen had an incredible weekend at Imola during his year in F3, winning one race and storming through the field in another, storming past Esteban Ocon, Nicholas Latifi and – on the line – Antonio Giovinazzi, for a superb second place

Charles Leclerc had a significantly less successful weekend at the track in Formula Renault 2.0 Alps Series, retiring from both races. Nyck de Vries dominated proceedings and went on to win the 2014 title by over 100 points. George Russell fared somewhat better in the same weekend, with two points finishes, and also got two podiums at Imola during his 2016 European F3 season.

However Russell was unable to stop Lance Stroll and the crushingly dominant Prema team. With two wins and a second place, he sealed that year’s title at the penultimate round.

Daniil Kvyat and Alexander Albon both drove Formula Renault 2.0 Alps here, in Kvyat’s winning 2012 season. However, as both look to secure results to save their 2021 seats, they probably won’t be looking for a repeat of the weekend where Albon managed 10th and sixth places and Kvyat secured a fourth and a retirement. Pierre Gasly had a more successful outing there the following year in the same series, getting his best result of the season with a second-place finish in race one.

Lando Norris also drove one of two 2015 rounds of Italian F4 at Imola, getting two points finishes from three races.

Noise restrictions around Imola mean that this will be a trial of Formula 1’s possible future two-day race weekend format, with no Friday practice sessions. In reality, we already saw that this season after conditions at the Nurburgring meant the medical helicopter was unable to take off during Friday running, keeping the pit lane firmly closed even if drivers and teams were in their garages and waiting.

This time, there’s no ambiguity: first practice will last for 90 minutes instead of the usual hour on Saturday, ahead of qualifying.

Time restrictions to the format are such that the Thursday press conferences have also been changed, with team principals joining drivers for their usual media sessions. That should make for some interesting answers, particularly from the one team boss who has just fired both his drivers…

Another adjustment passed by the World Motorsport Council for this weekend is a tweak to tyre allocations to reflect the lack of Friday running. Each driver will have 10 sets of dry tyres at their disposal: two sets of the hard compound, two sets of the medium and six sets of softs. The wet weather tyre allocation stays largely the same.

The faster drivers will have a tricky Q2 choice to make if they want to start the race on mediums. With only an hour’s practice, they’ll have to decide quickly which compounds might work best on a surface that hasn’t been run with these tyres.

If it turns out there’s an advantage to the medium, they’ll have to hope they find out extremely fast, to preserve at least a set for qualifying and the race. Equally, if hard tyres turn out to have any advantage then they’re left with the same quandary – and the only way to find out will be getting some good use out of them during the one hour of practice.

Two drivers who collided with each other will definitely be looking for a reversal in fortunes at Imola. Stroll and Norris have both failed to score in the last four races (Stroll having been forced to miss the Nurburgring round due to illness).

Norris is in the fight for fourth place in the standings, 15 points back from Daniel Ricciardo, and has both Gasly and Albon nipping at his heels, within two points behind. With McLaren battling to secure third in the constructors’ championship, a strong points finish for Norris here could significantly help their chances.

The team they’re trying to beat is Racing Point – whose 126 points have mostly been scored by Sergio Perez, despite Stroll taking the team’s only podium this year, in Monza. His F3 record at the circuit is impressive, so it will be down to this weekend to see if that can translate to F1 results.

Who do you think will be the team to beat in the Emilia-Romagna Grand Prix? Have your say below.