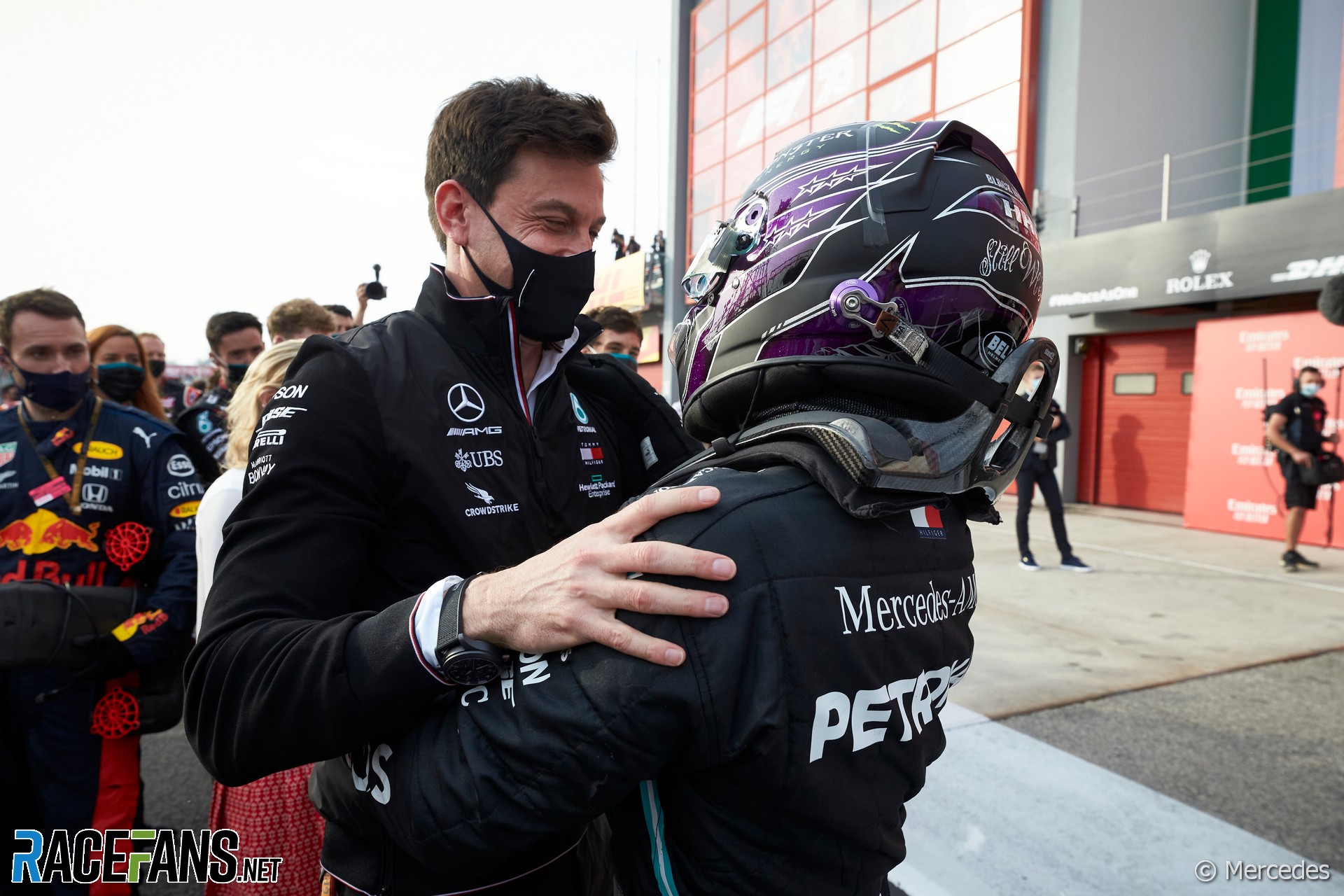 In the round-up: Toto Wolff says he doesn’t want to risk close contact with Lewis Hamilton over lengthy contract negotiations, due to concerns over Covid-19.

Speaking ahead of last weekends’ race, Wolff said he expects contract negotiations between him and Hamilton to be a lengthy matter, based on how long the last one took:

The last time took 10 hours but then we had it done and we finished the day with pizza.

So the truth is, like like we’ve always said, there’s a lot of trust between us and we keep saying we’ve got to find a day but I think the championship is more important, the drivers championship. I completely understand that Lewis and Valtteri [Bottas] want to concentrate on that, and the constructors for us, and it kind of seems that we have to get that done and then find the time to sit down together.

And I don’t want to contaminate either of the drivers with Covid and if you spend so much time together, you know, the worst thing would be if they miss a race or more.

Turning the wheel in a Formula 1 car for the first time 👌 Enjoy it @yukitsunoda07! pic.twitter.com/bIvcQ850g6

👍We're go! The BRDC British F3 season finale at @SilverstoneUK this weekend will go ahead.

🏆Our 'fast five' will be going for championship glory, and we have a 19 car grid confirmed, our joint biggest of the year!

Very happy to announce that @SkySportsF1 will be broadcasting the last round of the @BritishGT champs this weekend at Silverstone LIVE!! 🙌🏽 The race starts Sunday 12:50pm U.K. time, see you on the start line! 👌🏽 pic.twitter.com/ECD4jZ2MF8

"Johnson, at 45, is still competitive, fit and relatively unscathed physically from 21 years of banging fenders and trading paint at NASCAR’s premier level. 'But it’s a grind,' admitted Johnson, who is the oldest full-time driver in the series."

"At the end of another mentally and physically demanding and exhilarating few days, the four selected drivers are now scheduled to head to the Ferrari Driver Academy for five days of assessment and Formula 4 track time on the Fiorano circuit (9-13 November). At the end of this training course, just one of the drivers could be awarded a one-year contract to join the Ferrari Driver Academy for an FIA Formula 4 season in 2021."

"The LMP1 grid will be the final race for the Toyota Gazoo Racing TS050-hybrid and will bring the LMP1 hybrid era to a close with the introduction of the Hypercar class in 2021. While the LMP1 teams title has already been won by Toyota, the Eight Hours of Bahrain will decide which of the two Toyota crews will be crowned as 2019/20 World Champions."

"In order to express our gratitude to our competitors for their commitment and for their will to compete despite all the complications triggered by the safety protocols, we have worked hard to secure in advance a set of dates for the next season that sticks with TCR Europe’s traditional offer: seven racing weekends in some of the most iconic circuits in Europe. On top of this I can confirm that costs will not be increased.'"

On the topic of Red Bull’s power unit future, Erzen asks if their two F1 entries might prove irresistibly valuable, compared to the costs of developing on Honda’s intellectual property, to prospective teams wanting to avoid a $200 million entry fee?

It’s going to be interesting to see how this develops. If Red Bull does indeed pull both teams out of the sport, as they sometimes threaten to if they don’t get things going their way, any new entrant could buy the teams or their assets, and join the sport without having to pay the anti-dilution fee, that’s 200 million reasons for any potential entrant to be drooling at the idea of getting a free pass on one of the top F1 teams of the past decade.

Red Bull must be aware that they have to play by the rules, rather than change the game to suit their needs
Erzen