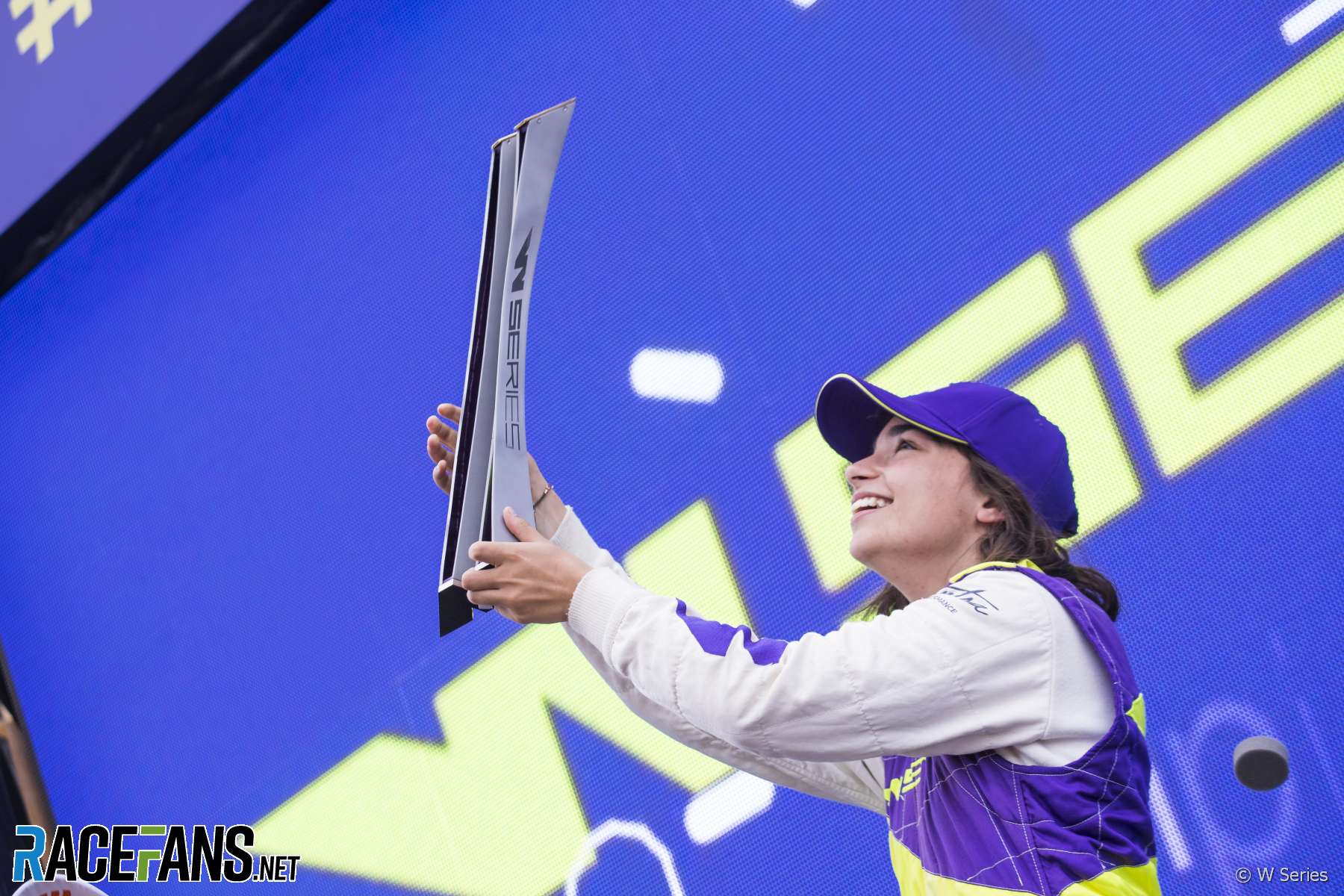 The series announced this morning it will support eight rounds on the 2021 F1 calendar.

Valtteri Bottas, whose girlfriend is a professional cyclist and has tweeted about the lack of funding in women’s sports compared to men’s, said that increasing the visibility of W Series was important.

“I heard about the news today and I think it’s really good,” said Bottas. “They’re obviously going to be more visible, that series, than what it was before and if you can succeed there proceed and impress, you might have opportunities to go much further than that.”

He said he hoped that being part of a grand prix weekend would increase coverage and interest in W Series. “I think this is a positive thing and it’s an interesting series and I think now more people will know about it and will be able to follow it.

“It should be followed, like any other women’s sport it’s, many times, underrated and it’s actually really interesting to watch, but there’s no coverage, so I think it’s a really, really good thing.”

“I’ve grown up and come through the other ranks, so I think it’s great what they have already done. And I think it’s definitely very, very important that they’re here on the global scale.

“When we talk about diversity, people often think that we’re talking about having more people of colour. It’s not just that, it is having more women involved. At the moment it is a male dominated sport and that does need to change.”

He said that he’d seen how difficult it was for the small number of female racers he’d competed with in karting and lower categories, “I remember racing from karting, all the way up and only seeing less than a handful of young girls coming through and I remember seeing and speaking to a couple of them, just knowing how difficult it was.

“I raced with Susie [Wolff], who I think was such a great talent and I remember how tough it was for her, just witnessing her being in what was perceived as a man’s sport. The sport does need to do to do more.”

Hamilton said more opportunities for women are needed from karting upwards. “I think [W Series] is a good step in the right direction but I think that needs to transcend all the way down to karting. I don’t know what karting is doing but there needs to be more females, more girls in karting with more opportunity to make their way up to that class.

“There’s plenty of access for young boys and men to come through the karting ranks into single seaters. They need to do more, we need to do more to make sure that young girls out there know that it is a possible career path. Hopefully that’s what W Series is doing.”

Wolff was the last woman to drive in an official F1 session, at Silverstone in 2015. Haas driver Romain Grosjean hopes the addition of W Series to the F1 support roster will help propel women into the sport’s top flight.

“I remember when I went into a category that was one of the support races for Formula 1, it was a big deal because you were under the spotlight,” said the Haas driver.

“I think for W Series, it’s a great opportunity for all the girls racing there and obviously it’s a big step forward for the series in terms of viewership and image. So I think it’s cool and I’m looking forward to see what it brings and if there’s any chance that we will see a girl Formula 1 racing driver.”

Jamie Chadwick, who remains the reigning W Series champion following the cancellation of this year’s championship due to the pandemic, is a development driver for Williams. Her team mates also welcomed the W Series

“It’s great that they’re going to be racing on the F1 weekend and it’s going to give definitely more recognition to the series itself,” said Nicholas Latifi. “It’s still, obviously, a relatively new series and it’s only going to be growing.

“I think the fact that they’re going to be on the stage in F1 is similar to the feeling I got when I first raced GP2, when you’re around the paddock. I’m sure it was the same for GP3 at the time, F3 drivers. I think it’s a good step for them.

“I think as it’s only going to grow, it’s going to attract more drivers, it’s going to probably push for an inclusion of more women getting into motorsport, from a driving point of view so it can only help the cause.”

George Russell described the move as an obvious change for the better which would also add value for fans attending races.

“It’s great to see W Series in the Formula 1 circus. It’s obviously adding to inclusion and it’s going to help more women to get into motorsport and to make Formula 1 and motorsport in general a more diverse sport, which is obviously the route we need to take.”