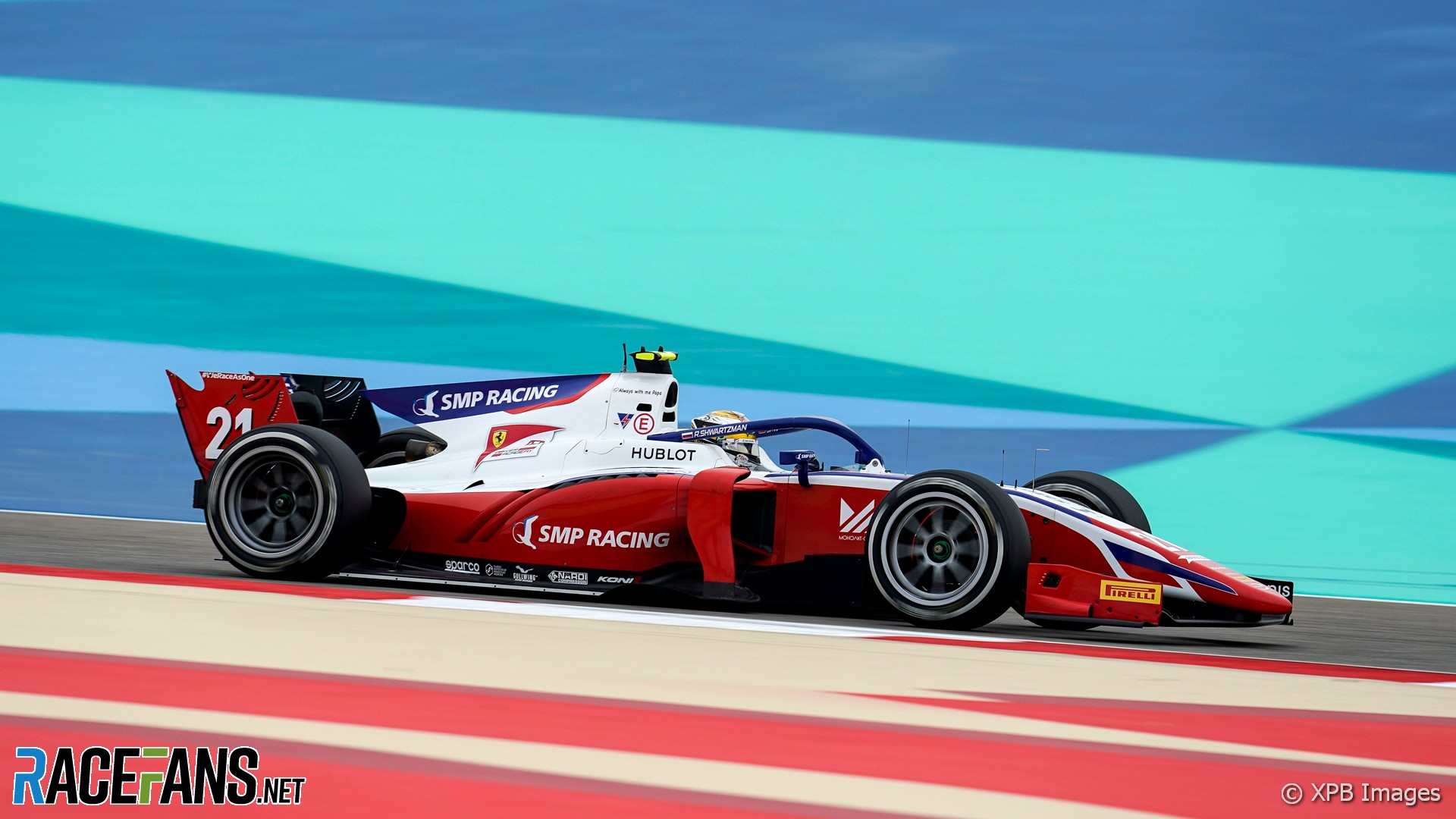 Robert Shwartzman has kept his slim chances of winning the Formula 2 title alive by taking his fourth victory of the season in the Bahrain sprint race.

The Prema driver, who led the championship early in the year, scored his first win for three months having taken pole position by finishing eighth in yesterday’s feature race.

However it was a poor race for title contenders Mick Schumacher and Callum Ilott. The latter failed to score after colliding with Jehan Daruvala, while Shwartzman’s team mate slipped to seventh place with fading tyres.

Shwartzman kept his lead from pole position ahead of Marcus Armstrong and Yuki Tsunoda. Nikita Mazepin lined up fourth but started poorly, slipping to sixth behind Daruvala Schumacher. Tsunoda and Armstrong made contact at turn one, forcing Tsunoda to pit with a puncture on the first lap, wrecking the title hopes which his recovery drive yesterday had reignited.

A four-way battle for fourth emerged between Schumacher, Mazepin, Ilott and Jack Aitken, the latter having surged up from ninth on lap one. After two laps of back-and-forth with Schumacher, Mazepin managed to reclaim the place he’d lost on the grid on lap four, then took Daruvala for third.

That left Schumacher scrapping with Aitken, the pair swapping places between corners. But the battle was interrupted when Theo Pourchaire was forced to pull over to the side of the track after his fire extinguisher went off.

This brought out the Safety Car, offering any drivers whose rubber was in particularly poor condition the opportunity to pit at low cost. However those who did come in – Aitken, Tsunoda (again), Louis Deletraz and Luca Ghiotto – were unable to rejoin the queue of cars before the restart, diminishing the advantage they had gained.

Ilott was sitting on title rival Schumacher’s tail at the restart, and at turn 10 the pair had a near-miss with disastrous consequences for the Virtuosi driver. As Schumacher locked up behind Daruvala, Ilott also snatched a brake and threw his car down the inside of the points leader. He clattered into Daruvala, and made the lightest of contact with Schumacher, but the Prema driver emerged unscathed.

“Really sorry to Jehan Daruvala,” Ilott posted on social media immediately after the race. “I locked up, steering to avoid Mick and had nowhere to go. Shouldn’t have happened.”

Race control slapped Ilott with a drive-through penalty for the collision, which ended his chances of scoring points. Luckily for him, Schumacher was unable to significantly capitalise on the opportunity this presented.

Shwartzman retained a comfortable lead to the end but his team mate Schumacher slipped down the order, passed by Guanyu Zhou for sixth. He defended firmly from Christian Lundgaard, dropping his rival into the clutches of feature race winner Felipe Drugovich, prompting a spirited battle between the two.

Both Mazepin and Pedro Piquet slipped past Armstrong on lap 12 for second and third places, their battle letting Shwartzman draw out a three-second gap. Further back Deletraz’s pit stop gamble under finally paid dividends, however, helping him move up to fifth on much fresher rubber.

Shwartzman’s win puts him on 159 points while Mazepin’s second place puts him on 162, demoting Tsunoda to fifth in the championship. Schumacher moves up to 205 points, 14 ahead of Ilott, with 48 available in next weekend’s finale on Bahrain’s Outer circuit. The top five remain capable of winning the title, though Tsunoda’s chances are extremely remote.