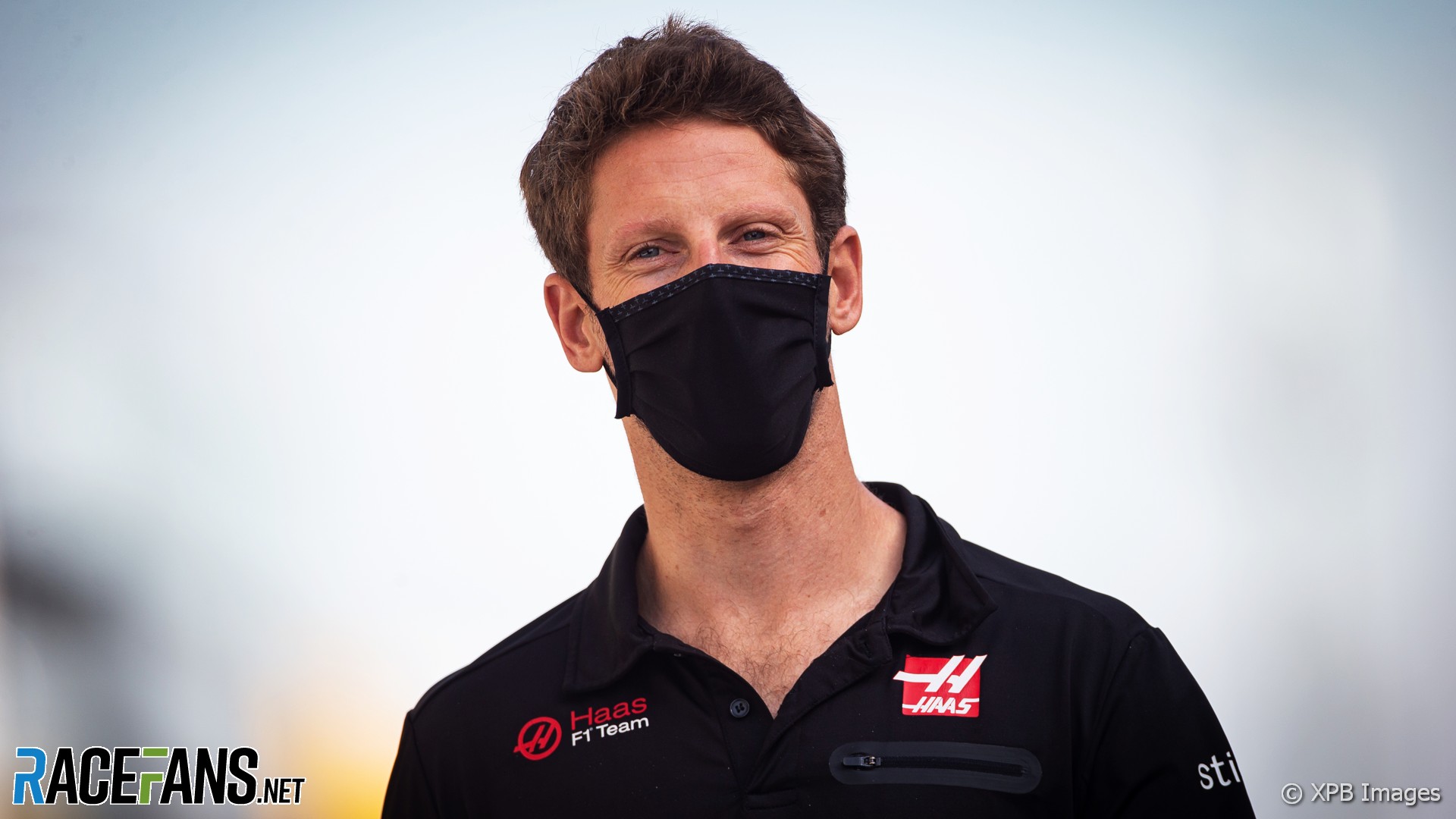 Asked yesterday why he chose IndyCar for his return to racing in 2021 over other series such as Formula E, Romain Grosjean began his answer with a single word:

Still recovering from the burns he suffered in his horrific crash on the first lap of the Bahrain Grand Prix 67 days ago, Grosjean says he selected IndyCar to continue his life after F1 because it fired his passion for racing.

“After the accident, there’s one thing I realise in life,” he says. “It’s [you] have the choice to say no or yes.

“I think IndyCar is a top series, top drivers, top cars, super-exciting to drive. Yesterday Will Power posted on Twitter a nice video from the helmet, testing in Sebring. Hearing the sound of the engine and watching the onboard, I just took the clip, sent it to my wife and said ‘This is why I do it’.

Sports cars were another possibility for Grosjean. But that is something he wishes to pursue later in his career.

“Endurance is a mid-term thing that I’m looking for when I’m too old for single seater,” he explains. “Right now I felt like I was ready to take the challenge, I wanted to do it.”

Long before his crash in Bahrain it became clear Grosjean was not going to continue with Haas in Formula 1 for another season. Haas was hit hard by the Covid-19 pandemic, and subsequently replaced its two experienced drivers with a pair of rookies, Mick Schumacher and Nikita Mazepin, both of which promise to be financially beneficial to the team.

Grosjean got in touch with his new IndyCar team boss Dale Coyne in October prior to the Emilia-Romagna Grand Prix. He sounded out those he knew in the series, notably fellow F1 refugee Marcus Ericsson, who went State-side in 2019. He’s also on good terms with a pair of Indianapolis 500 champions, Simon Pagenaud and Alexander Rossi.

“Simon Pagenaud and Marcus Ericsson were very helpful in asking questions, basically what HANS device to use to what are the good teams, what do you think, how do you deal with your hotels,” Grosjean explained. “They’ve been great help in that aspect.”

Grosjean admitted he had “a few options on the table” for 2021 “but I felt like the one that I wanted to do was IndyCar.”

He began binge-watching recent IndyCar races on YouTube – he estimates he’s already logged 18-and-a-half hours. Having spent much of the last seven years driving cars which often weren’t points contenders, let alone in the hunt for podiums and wins, the prospect of being nearer the front of the field again clearly appeals to him.

“The excitement comes in the fact that in Formula 1, after turn one, you normally know what’s going to be the race result. Just because you know the pace of the car, Mercedes is going to pull away, maybe the Red Bull is going to be there. Some things can change, but nowhere as much in IndyCar.

“Mid-Ohio 2018 I watched recently. Sebastien Bourdais had an issue in qualifying and started back of the field. He came back like a bullet from the gun and finished sixth just behind Scott Dixon.

“The race was not over: The strategy was the alternative one, he started on the black tyre, went for the reds, just came back from the back. That’s not something you’re going to see in Formula 1 unless Mercedes qualify in the back, which never really happens. That was great to see.

“Most of the races between the cautions, the pit stops, the refuelling and so on, there are always options for strategy. Sometimes it goes your way, sometimes it doesn’t really go your way. That’s really something I have appreciated about it. The fact that it’s never over. You may run into trouble with fuel, you may not. You may have tyres going away. Because the cars are quite close in performance, the field is never really spread. That’s cool to see.”

Despite the horror of his crash in Bahrain, it’s clear Grosjean has no qualms about trading some of Formula 1’s more antiseptic circuits for IndyCar’s raw venues with limited run-off and barriers close by the track’s edge. “The circuits look amazing,” he says, “just the old style that I really like.

“When you look at Road America, Mid-Ohio, the street courses, Laguna Seca, they’re part of the circuits that I used to play video games on 20 years ago.”

But he will steer clear of IndyCar’s most dangerous circuits – the ovals, where average lap speeds can exceed 370kph (230mph) – for the time being. His 2021 roster includes the 13 road and street course tracks but not the four oval rounds. He doesn’t want to put his family through the terror of fearing for his life again.

Having had plenty of run-ins with the stewards during his time as a Formula 1 driver, Grosjean is also hoping IndyCar’s officiating will prove more lenient. In particular, he was “surprised” to discover IndyCar’s rules on blue flags are much less strict than F1’s.

“You don’t need to let [the leader] by when there’s a blue flag. Many times I got penalties in Formula 1 because I didn’t respect the blue flags. You have five corners to let the car by, whilst in IndyCar you can just keep racing. It’s information, it’s not so much mandatory. There’s a few things that I just need to get used to that are quite different.”

“There’s lots to learn from a rolling starts to doing the pit stop to learning the car,” he adds. “I’m ready to tackle the challenge. I think it’s the right one.”

The single biggest difference between Formula 1 cars and IndyCars is the latter are built to a single specification – aerodynamic development is not allowed. Therefore the American cars are also designed to be able to run together much more closely.

“This is something I’m very, very much looking forward to,” says Grosjean. “The way you can follow the car in front of you, the way you can slide the tyres, the way you can either try to play with your ‘push to pass’, the fact that the cars in qualifying are within six-tenths of each other. This is all really exciting.

“You need to get the details right and so on. You don’t have the differential you can move, you don’t have the [energy] recovery and all the shaping and the braking, the systems you can have in Formula 1.

“Yes, the car is a little bit slower, but the racing looks much better from everything I’ve been seeing. In that respect I’m super-excited about it.”

For the time being Grosjean intends to remain based in Switzerland and commute to the races. Having enthusiastically taken up simracing in recent months, he is already practicing for his IndyCar debut on iRacing.

The late confirmation of his departure from Formula 1 meant a top IndyCar seat at the likes of Penske, Ganassi or Andretti was not an option. Nonetheless Coyne has won races as recently as 2018 and Grosjean, who aside from his 2012 Race of Champions win hasn’t stood on the top step of a podium since clinching the GP2 title a decade ago, is relishing the thought of being a contender again.

“I know if you compare maybe the Penske or Team Ganassi, Dale Coyne Racing is a small team,” he says. Again, it doesn’t mean that you cannot compete at the front.

“I think I need to learn how IndyCar works. We need to learn to work together. I’m not going into race one thinking ‘I’ve done 10 years in Formula 1, I’m going to win that easy’. No, I need to learn. Drivers there have been running for many years, they’re very competitive.

“But the cars are pretty much the same, apart from the dampers. It’s up to setting it up and getting the right relationship with the engineer and driving it.

“I think we can be competitive. I am not coming just to be entering IndyCar. That is definitely not my option. But also I’m entering knowing that I’ve got many things to learn. Let’s see where that brings us. We’re ready to tackle the challenge and to learn as fast as we can.

“But as I say, I’ve been watching many races. The team has done very well last year with some rookies, so I’m hopeful that we can repeat that or even top up a little bit.”