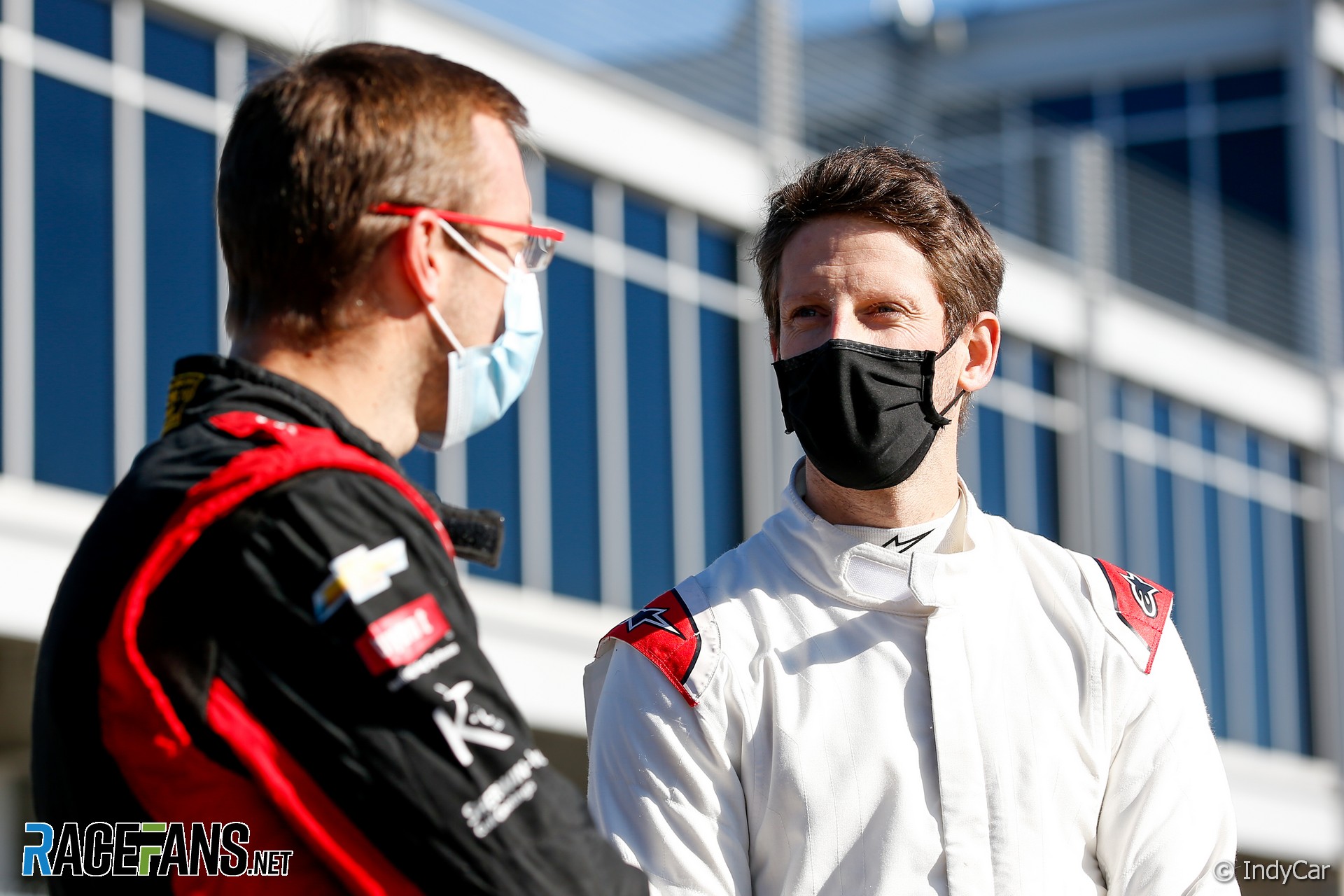 Romain Grosjean enjoyed the welcome he received in his first IndyCar test yesterday, but the former F1 driver admitted he hadn’t always been as warm towards other drivers earlier in his career.

“It’s definitely very different from what I used to have,” said Grosjean when asked how he found the atmosphere in the IndyCar paddock during his first test at Barber Motorsport Park yesterday.

Former Formula 1 driver Marcus Ericsson, who moved to IndyCar in 2019, had encouraged Grosjean to consider a move into the American single-seater series.

“It’s been great,” said Grosjean after his first day of testing. “Marcus wasn’t wrong, I’ve had already some good interaction with Sebastien Bourdais, he was [in the] next pit so that was easy.

“Takuma Sato came over. I saw some of the other guys, Simon Pagenaud in the pit lane, he was driving and I gave him a wave and he gave it back. So generally it’s been a great day in that aspect.”

Grosjean joins Ed Jones in Dale Coyne’s team for the upcoming season. “With Ed, my team mate, we have a good relationship as well,” he said.

“I told him I used to be an asshole as a team mate back in the day, but now I’m 35 and I like to be friendly. On track you want to beat them, there’s no doubt, but outside of the track I think if we can be friends, it’s mega.”

The former Haas F1 driver was also satisfied with his first experience of driving an IndyCar and returning to the cockpit for the first time since his horrendous Bahrain crash. “It felt like home, to be fair,” he said.

“I didn’t have any apprehension or whatever, just going out there, learning the car. The real question is going to be a race start in April 18 here in Barber. But for now, driving the car is good.”

He had one incident of note during the test when he spun into a gravel trap at turn one. “Basically I just went too fast in,” he explained.

“When I was on the brake, I also picked up the throttle, which you do in the high-speed. But because it’s a mechanical diff, it does open the diff when you do that and therefore it sends you, it makes the car lose [grip], whereas in Formula 1 it would actually stabilise the car. So I would say it was a learning experience, and then I didn’t do it any more and it was better.”

No official times were issued from the test. Grosjean said he was pleased with his performance in a competitive field. “It’s definitely super-tight,” he said. “There were a couple of very quick times at the front.

“For us, the last set of tyres, I didn’t get anything out of it. It just didn’t feel great for some reason. And the sun was quite close so visibility went down.

“But I think the set before, middle afternoon, we had a decent lap time, especially looking at the track condition, maybe a bit hotter.

“But generally, I don’t know, it’s difficult to say. It’s definitely super-tight and we need to keep working and I need to keep adapting my driving style and understand how to go faster in IndyCar because it’s a bit different than a Formula 1 car.”