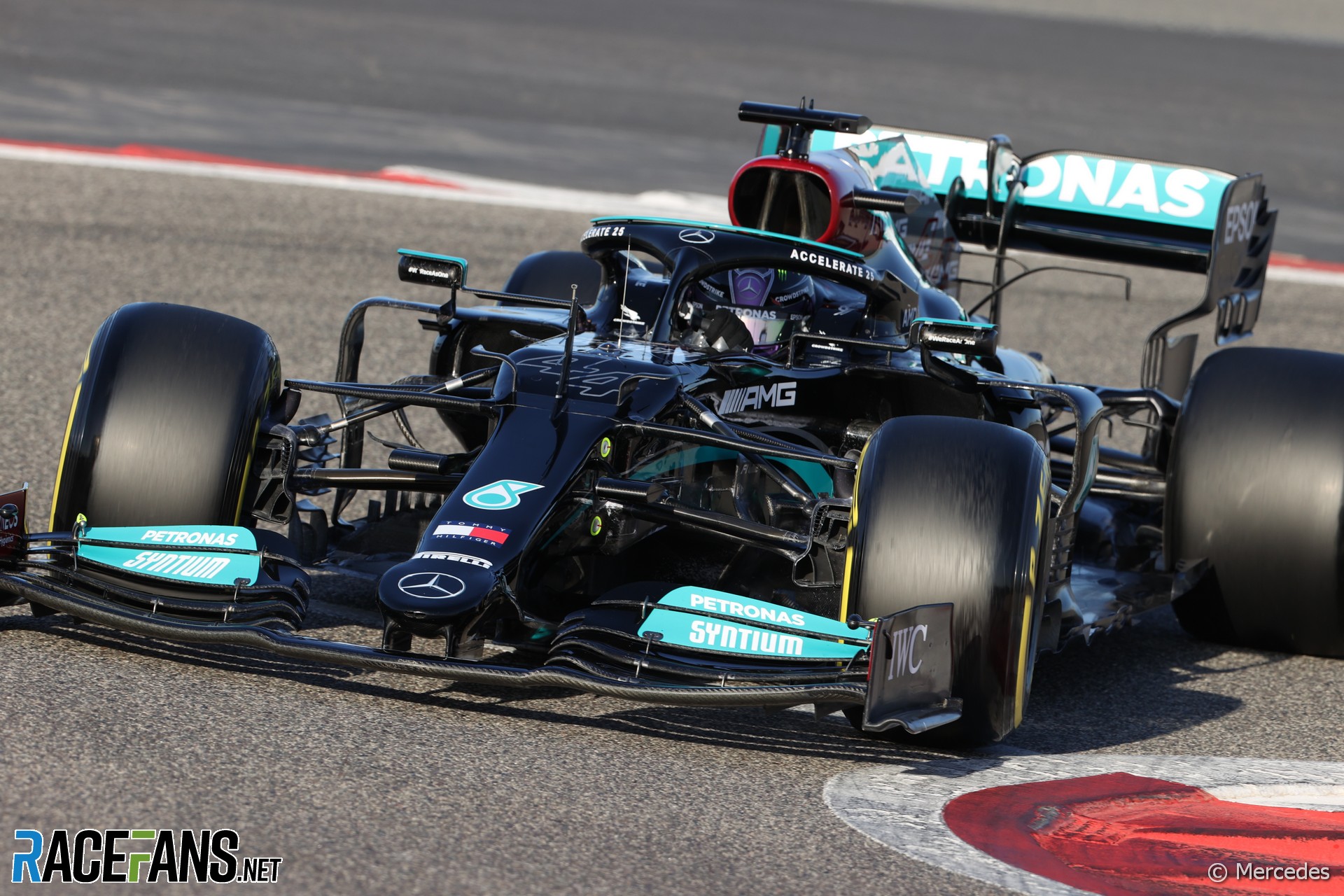 Mercedes say improving the rear-end balance of the W12 is a key area they are working on to close the gap to their rivals after testing.

Both the team’s drivers commented on the changes to the car’s handling since the introduction of new rules during the off-season intended to reduce rear downforce.

The team’s trackside engineer Andrew Shovlin said they are trying to make the W12 a more forgiving car for Lewis Hamilton and Valtteri Bottas, based on what they learned at last week’s test.

“The wind made it tricky,” Shovlin explained in a video released by the team. “When the wind is behind the car you lose a lot of downforce because effectively the airspeed is reduced.

“So some corners where the wind was behind, it was prone to doing that, and then also the tyres are quite easy to overheat on that circuit and if you start sliding, you tend to lose grip and it gets worse. So there are a few problems.”

Rival teams did not appear to have the same balance problems as Mercedes, said Shovlin.

“Importantly, we could see that some of our competitors weren’t struggling in the same way as us, so we need to put quite a focus on understanding why the rear end was a bit weak, how we can get it more stable and predictable and that work is going on now.

“Hopefully when we get to the race weekend it won’t be so difficult for the drivers because they were having to work pretty hard to do the lap times that they were doing.”

Mercedes’ efforts to make progress with the W12 were complicated by the fact they covered the lowest mileage of any team. Shovlin said this was partly because work on the car between the days’ two sessions took longer than expected, which reduced how much running they could do in the afternoons.

“Fundamentally it was because we were trying to do a lot of work on the car in that lunch hour. We have to do the driver swap, which requires quite a few items like pedals and things to change, so that is one thing.

“Also, we were taking the floor off the car to do some checks and some service work on the power unit. Now, we were thinking we would lose the first hour of the afternoon. We thought it might run in by 15 minutes or 30 minutes, but as you saw we were rarely out before four o’clock.”

Red Bull set the quickest time of pre-season testing. Mercedes’ chief strategist James Vowles is convinced their Honda-powered rival will begin the year as the team to beat.

“It was pretty evident from that [our] car was handling poorly and conversely the Red Bull, in fact, looked what we would call ‘planted’. It was a very stable car especially through the last sector of the lap.

“I think that’s a fair observation, it was visible to the outside and I would say the lap times mirrored that as well. “But it’s also fair to say that we don’t have answers as we are sat here now, it is just 24 hours after the end of the test. [There’s] huge amounts of data available to us and now a long journey ahead to try and understand what was causing that.”

“I would say Red Bull are ahead on performance,” he added. “They are the class act from the test. But it is a test, it is not a race and it is one event out of 23 [races].”

Vowles predicted a “close season” between the two teams.

“Red Bull are a fierce adversary, they’ve got a strong package and clearly came out of the box very, very quick. The result of that is across the season and across different types of track layouts, I am sure you will see us move forwards and backwards relative to them but I don’t believe we are going into this particularly finding all the performance that is missing or being ahead of them.

“So, in short, yes, I think we are going to have a close championship this year.”