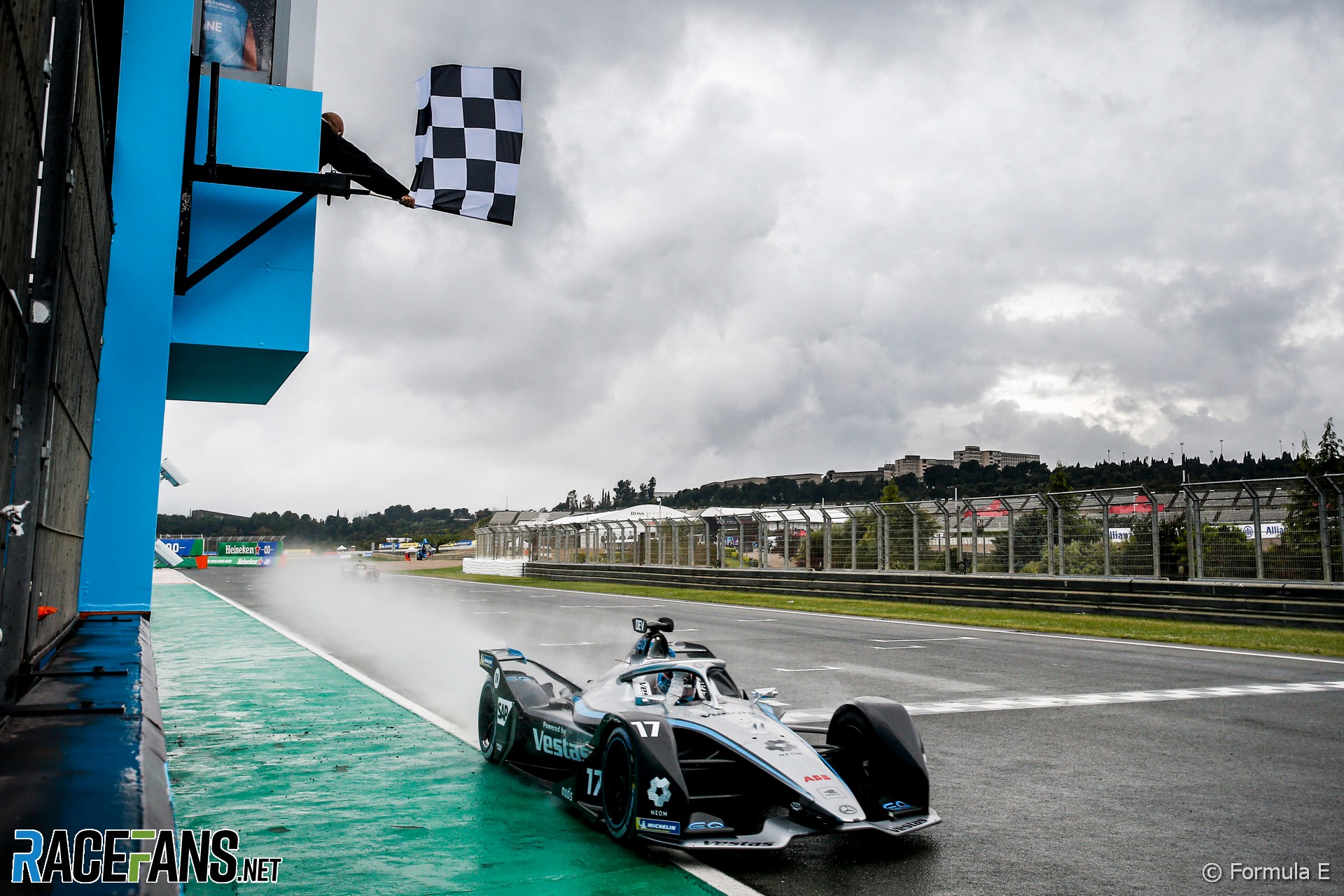 Nyck de Vries has won a farcical Valencia EPrix which ended with car after car either crawling to the finish or running out of energy.

The rain-hit race was interrupted by a series of Safety Car periods. Under Formula E’s rules, the amount of energy each driver may used is reduced by 1kWh for every minute spent behind Safety Car.

As the final lap began, only a handful of drivers were reported as having more than 1% of energy left. De Vries led Nico Müller and Stoffel Vandoorne to the flag.

Among the 12 drivers listed as finishing the race, more than half came in over a minute behind, despite a late restart. Nick Cassidy took fourth ahead of Rene Rast and Robin Frijns. Antonio Felix da Costa was a minute behind in seventh, Alexander Lynn and Sam Bird behind him another 20 second back.

Vandoorne had taken pole position, before being disqualified from qualifying due to a technical infringement. He was permitted to start the race, in 24th, while pole was inherited by reigning champion Antonio Felix da Costa. Max Guenther started alongside him.

With rain pelting down on the grid the race began with the first of many Safety Car periods, which lasted just one lap. However, the newly-branded Mini Safety Car was quickly back out as Andre Lotterer and Sebastien Buemi collided halfway around the restart lap.

After Buemi’s car was retrieved and Lotterer issued a drive-through penalty, a relatively long period of racing ensued during which Nyck de Vries, who had started eighth, hunted down second place to chase Da Costa.

A third Safety Car period was required when Max Günther went into the barriers. Following a brief resumption, a series of collisions between Mitch Evans and Sergio Sette Camara, and then eventual podium finishers Vandoorne and Müller, left more cars in the gravel.

The fifth Safety Car period was occasioned by Lotterer clattering into Mortara, sending them both skidding over a painted kerb to beach in the gravel at turn one.

The race restarted with two laps remaining. But, with 19kWh of energy cut from the starting battery capacity of 52kWh – one lost for each minute of the 45-minute race spent behind the Safety Car – only a handful of cars had enough usable energy remaining to complete a final lap.

Several cars stopped on-track as their energy ran down and some managed to crawl to the finish. Mercedes judged the situation well, and De Vries finished with sufficient energy to seal his first Formula E win, and team mate Vandoorne in third, the pair separated by Müller’s Dragon.

NB. The race result has been updated to reflect the final classification.