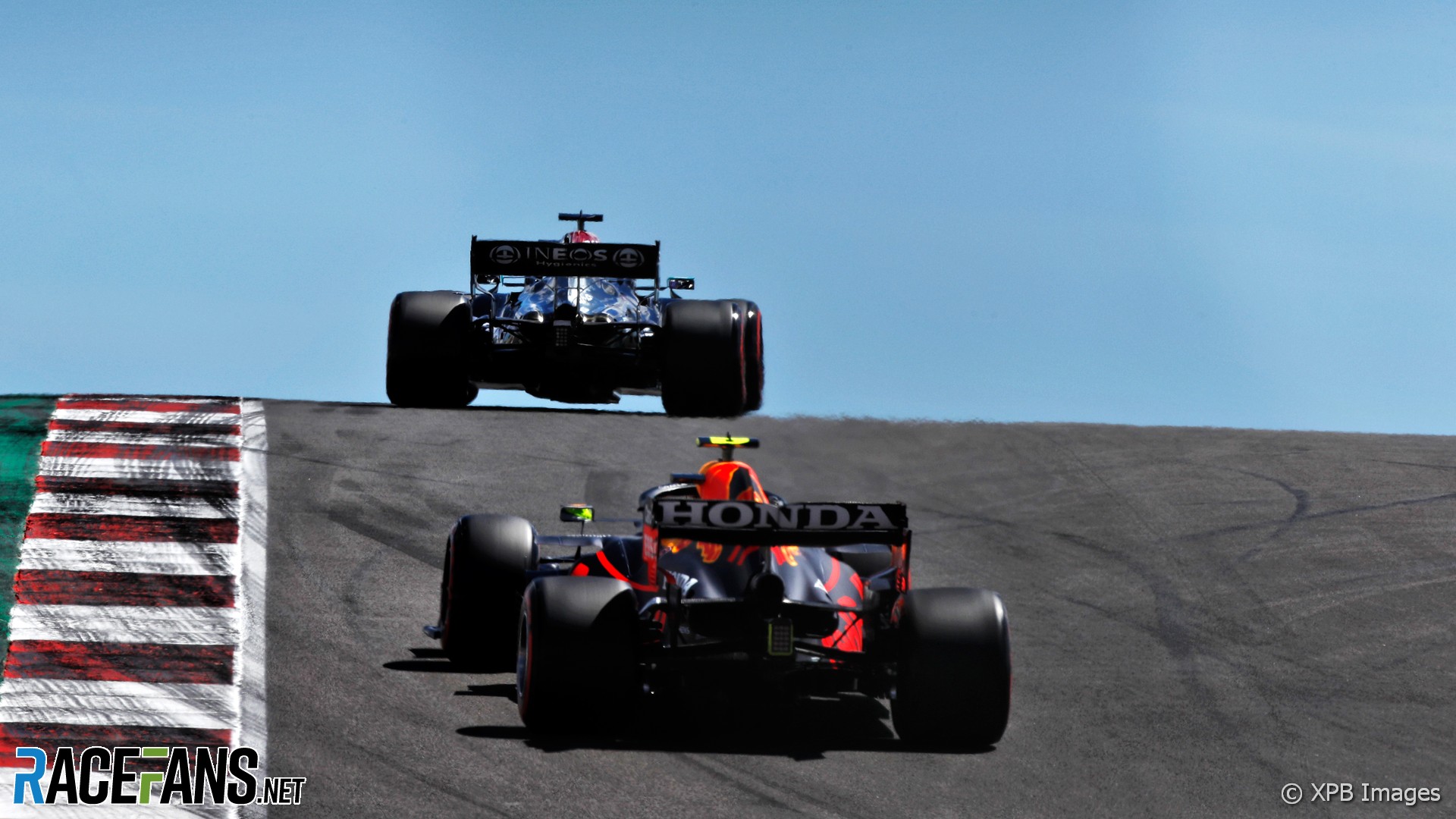 Red Bull have long wanted to have two competitive cars to take on the might of Mercedes. Having claimed the second row behind their rivals, we should finally see the four-way fight we’ve been waiting for.

But the two teams’ choice of tyres could put them in a vulnerable position at the start of Sunday’s race. Tyre warm-up and changeable wind conditions are likely to present a challenge to all drivers in the Portuguese Grand Prix.

Last year, there had been new Tarmac laid at that Autodromo do Algarve ahead of Formula 1’s arrival, which Max Verstappen said took the track from “top three of [his] favourites” to somewhere he no longer enjoyed driving. The surface is extremely low in grip and drivers have struggled to find a tyre combination that works across the weekend. It even drove Mercedes to experiment with running the medium tyres in Q3, to no avail.

Some teams had anticipated considerable improvement in the track surface. But while some events have run in the six months since F1 last visited the track, the surface remains low in grip.

Esteban Ocon said that Alpine’s improved pace was at least partly down to preparing for that possibility. “We turned up here thinking that the track was going to be a lot better than last year,” he said. “But in our mind we thought about what we could do if that was not the case and if it was like we left it last year.”

Last year, when a brief shower fell at the start, the cars on medium tyres were left struggling while those starting on the softs were able to easily pass them. Will that happen again?

Of the top 10 starters, the occupants of the first two rows (Mercedes and Red Bull) will start on the mediums, while the rest will be on soft tyres, bar Charles Leclerc. Most teams and drivers seemed to concede, after qualifying, that for pace there is likely no significant disadvantage to the medium in the race.

But that disregards the longer time needed to warm up the tyres. Mercedes’ trackside engineering director, Andrew Shovlin, said it was their biggest concern about the start. “We had wanted both cars on the medium tyre to start the race and on balance, we’re happy to have Red Bull on the same start-tyre given that we have track position,” he said.

“Our main concern will be the warm-up on that compound, the soft runners on the third row and behind will have a grip advantage that could last a lap or two so that may make things tricky.”

But given their starting positions, Red Bull are in more immediate danger from that possibility. If either of their drivers loses a position to a soft-tyred third-row starter off the line, it could crucially delay their pursuit of the Mercedes, and wreck Red Bull’s plan of using the strategic possibilities created by having two competitive drivers to prise the Mercedes pair apart.

The windy conditions at the exposed circuit have been a factor all weekend, and that is likely to continue. The highest wind speed during qualifying was 20.7kph, however, conditions tomorrow are currently predicted to include stronger gusts of 24-29kph during the race.

Both Lewis Hamilton’s Q2 lap, the fastest in any qualifying session and Verstappen’s deleted Q3 lap that would have gained him pole but for a few inches of track limits, had their exceptional speed in the final sector. When the wind changed slightly to affect the final sector, cars were not able to improve on lap times.

If those conditions are replicated in the race it may affect cars’ ability to follow through the final turns and then overtake. Verstappen and Norris both complained about being too close to cars in that sector, so if there is a period during the race where the wind moves to cross turn 15 (as in Q3) then drivers may struggle to stay close enough to use the DRS detection zone or to carry enough speed to take full advantage of activating it.

Carlos Sainz Jnr described how significant the effect was in qualifying. “For me it was the same Q3 run one to Q3 run two,” said the Ferrari driver. “I improved by half a tenth because in run one I made a mistake in the last corner.

“It is true that the track was three tenths slower between Q2 and Q3. I remember coming into turn 13 with a zero on the delta and then losing three tenths in the last two corners. The wind was pushing much more.” The data below shows how much drivers were struggling in Q3.

For cars heavily affected by the wind, like the Williams, this could prove problematic. So despite George Russell’s excellent qualifying performance putting him in eleventh place at the start of the race, he may have relatively scant opportunities to overtake despite straight-line speed seeming to be one of their cars strengths. Russell registered the second-highest speed trap figure of 321.1 kph, beaten only by Fernando Alonso who went through at 323.7kph, to no real benefit to his overall lap time.

Like Lance Stroll (17th) and Daniel Ricciardo (16th), Alonso qualified lower than might have been expected – especially given the performance of team mate Ocon in sixth. If conditions make DRS difficult to take advantage of, their way up the grid may either be forced into more exciting overtaking manoeuvres or reach a frustrating stalemate among other cars with starting tyre choice.

Although the very fastest cars on the grid are roughly where you would expect to find them, Mercedes seeming to have the pace advantage over Red Bull at Portimao, the midfield is rather more spread as a consequence of team mates being separated. The only drivers who will line up next to their sister cars are at the two teams at the very front of the grid and Haas, on the final row.

Will the two Red Bull drivers take the fight to the Mercedes pair? And what can the likes of Alonso, Stroll and Ricciardo achieve after qualifying well down the order?

Share your views on the Portuguese Grand Prix in the comments.