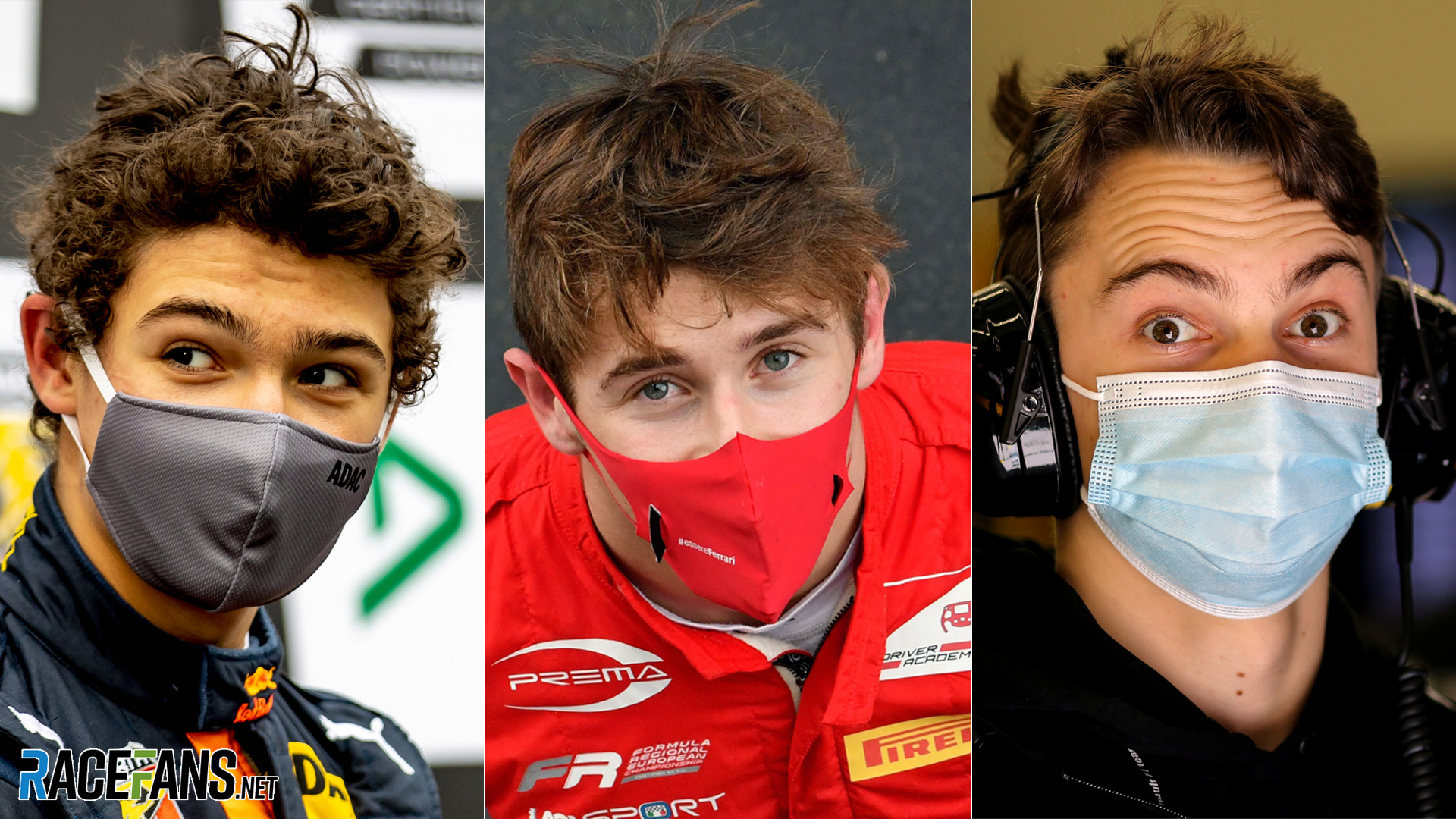 While three new drivers were promoted to F1 this year, it’s only becoming trickier to get into grand prix racing as the cost of competing has increased at all levels.

Unusually, McLaren have looked beyond the F1 paddock and offered a rookie test to IndyCar race-winner Patricio O’Ward. But for most teams and drivers the FIA-backed junior series are where they look to find the talents of tomorrow.

For drivers who don’t have the backing of billionaires behind them, forming a connection with a Formula 1 team before reaching the sport has therefore become essential. These are the members of F1’s junior teams in line to make it into the pinnacle of single-seaters in the coming years.

Frederik Vesti’s move to ART Grand Prix in FIA F3 for 2021 may have come as a surprise, but it was all part of the behind-the-scenes manoeuvres which got him into Mercedes’ junior team at the start of this year.

Vesti clinched the Formula Regional European Championship champion with Prema in 2019, catching the eye by winning one race at the Hungaroring with only three functioning wheels, and stayed with the team as he moved into FIA F3 in 2020. The Dane came fourth in the standings, winning three races, and was initially set to stay there for 2021 before earning Mercedes backing and joining ART instead.

Regardless of the team he’s at, he’s a title favourite and a mechanically sympathetic driver with a engineer’s mind who could feasibly be on the same career path as George Russell.

Also racing in Spain will be Paul Aron, who is an ART driver in FREC and lies third in the points after the season-opener. He’s been with Mercedes since his attention-grabbing first car racing campaign in Formula 4 and they seem happy for him to take his time to reach F1.

Third in line is Italian karting prodigy Andrea Kimi Antonelli who turns 15 later this year and may have Mercedes pushing him into cars as soon as possible. He’s already tested F4 cars in secret and reportedly impressed, and many are eager to see his single-seater potential.

A three-pronged Formula 2 attack has already produced its highs and lows. Liam Lawson won his very first F2 race in the Bahrain season opener, and Jehan Daruvala was third in the points by Sunday evening. Juri Vips, who has been a Red Bull reserve driver since last November, didn’t have the same luck, enduring a penalty-filled weekend and leaving point-less.

Arguably all three have already proven themselves as possessing F1-level abilities, and look on course to go into 2022 eligible for the FIA superlicence needed to race in F1.

But Red Bull Junior Team boss Helmut Marko is supporting three drivers in FIA F3 as well, and they could feasibly jump up the queue for an AlphaTauri seat, if one becomes available.

Ayumu Iwasa is the reigning French F4 champion and has been privately touted as the next Yuki Tsunoda by Marko, no surprise given the 19-year-old is a Honda junior. His Hitech team mate Jak Crawford is front and centre of Red Bull’s plans to get an American into F1. Crawford is also racing in Euroformula this year, although he missed the opening two races last Saturday as he didn’t turn 16 until Sunday. He celebrated his birthday by finishing seventh on his series debut.

The third of the FIA F3 trio, and arguably the most complete, is Jonny Edgar. He’s very quiet off-track, but his penchant for passes invariably make him one to watch if he’s starting down the order. He will race for long-time Red Bull ally Carlin, which has run nine drivers who went on to race for Toro Rosso/AlphaTauri and Red Bull.

Following the renaming of the Enstone-based team formerly known as Renault, its junior programme is now known as the Alpine Academy and the brand’s focus has shifted with it. Alpine chief executive officer Laurent Rossi summed up the rebrand as “a chance for us to identify future champions and mould them to fit the brand exactly”.

Now the team wants their juniors to be commercial assets, and in Guanyu Zhou they have just that. The third-year F2 driver is China’s most credible candidate to become an F1 racer, and he leads the points going into the series second round in Monaco later this month. He’s commercially crucial for Alpine and the money he has brought in that helps fund his private F1 test programme has also boosted the test opportunities for F2 rivals Christian Lundgaard and Oscar Piastri.

ART driver Lundgaard finished just a few points behind Zhou last year as a rookie, and won more races. The first of those came in the opening weekend of the season after he had missed pre-season testing due to being stuck in quarantine.

That 2021 marks the first time Lundgaard has spent a second season in a single-seater series shows he has time on his hand to knock on the door of F1. If he can become more consistent and beat Zhou to the F2 title, then it becomes a question of who will be of most value under a new rule set in 2022 out of Lundgaard, Zhou and current seat occupant Esteban Ocon. Lundgaard’s rapid adaptation and progression through the single-seater pyramid suggests he could be the prime candidate.

There’s a third driver well in the game for a 2022 promotion, and in arguably F2’s top team. Oscar Piastri is the reigning FIA F3 champion and won in his maiden F2 weekend with Prema. Alpine already have a multi-year plan for him in the series, assuming he doesn’t emulate Russell and Charles Leclerc by winning the title at his first attempt.

But while Lundgaard’s commercial value in his native Denmark is limited, and Ocon is of significance as a Frenchman in a French team, Piastri is in the worst spot here as a mixture of state law and taxation has left the Renault Group reducing their presence in his home country of Australia and therefore makes advertising his efforts less important in that market.

Also vying for a place in Alpine’s future plans are Victor Martins, who has returned to the programme following a one-year absence, and Caio Collet, who will both be on the F3 grid this weekend.

Ferrari may not be the title-fighting team they once were despite their resources, but the Ferrari Driver Academy has put its infrastructure to good use and recent graduates have been exciting additions to the F1 grid such as Leclerc and Mick Schumacher.

Robert Shwartzman was Schumacher’s Prema team mate in F2 last year, and for a long time had the better of him with two early wins earned by strong strategy call.
A late-season turnaround by Schumacher flipped that around and earned him the title and a Haas seat. There was still a push to get Shwartzman into F1 as he fell to fourth in the standings, but instead he’s stayed at Prema for a second F2 season.

He showed scintillating pace at Bahrain last month, and while he outperformed DAMS’ Ferrari junior Marcus Armstrong in much the way he did in three years of F3 and F2 together, some of that was undoubtedly down to differences between their respective teams’ pace. Armstrong will have to overcome his car disadvantage if he wants to beat Shwartzman to a Ferrari-backed F1 seat.

Leclerc’s younger brother Arthur is representing Ferrari in FIA F3. He has a lot of support at Maranello, is driving for the yet-to-be-beaten Prema squad but hasn’t starred in pre-season testing and hasn’t previously shown as much magic as his stablemates in F2 despite finishing runner-up in FREC last year. He’s also got underlying links with the Venturi Formula E team, and is under less pressure than most of the F1 juniors.

Also leaning on Ferrari for young drivers is Alfa Romeo, who recently signed 2020 F2 runner-up Callum Ilott as their reserve driver and handed him his F1 practice debut at the Portuguese GP last weekend. He’s been a Ferrari junior since 2017 and is now driving one of the marque’s GT cars in endurance racing.

It’s clear his reserve role is being used to make comparisons to Antonio Giovinazzi, who Ferrari chose to keep in a Alfa Romeo seat this year, and he already has a close relationship with the Hinwil-based team. In F2 he proved himself to be more than an equal to F1 2021’s rookie crop too.

The Sauber Motorsport company behind Alfa Romeo has its own proteges, and with the prospect of Kimi Raikkonen retiring soon it leaves a space for a big signing or even the promotion of its own Theo Pourchaire.

Still only 17, the Frenchman has two F4 titles to his name, came very close to last year’s FIA F3 title and has already starred at the front in his first two F2 race weekends. His F3 victory in mixed conditions at the Hungaroring turned a lot of heads in F1 last summer, which built up anticipation for what he would in F2. He’s likely to break records this year, and would break even more if he reached F1 in 2022.

Three years younger than him is Emerson Fittipaldi Jnr, son of the two-times F1 world champion, who is debuting in Danish F4 under the eye of Sauber.

What used to be a factory experience-led deal for Williams-affiliated junior single-seater drivers in the era of Valtteri Bottas and Nico Hulkenberg has turned into a more digital one with development roles now taking place predominantly in the simulator since it was formalised as the Williams Driver Academy by Claire Williams’ husband Marc Harris in 2019.

He created the academy “based on a requirement to fulfil a revenue hole from sponsorship and lack of prize money” following Williams’ drop in form since the regulations overhaul in 2017, and it was announced as being part of a long-term project for the team. Whether Williams’ new owners choose to continue the academy into 2022 is up in the air and gives the current drivers little time and little chance to make it into F1.

So who has time running against them? At the front of the queue is Israeli Roy Nissany, whose F2 career so far has been light on points finishes but he was a race-winner in the now-defunct Formula V8 3.5 series which used to rival F2, including a memorable double victory at Silverstone in 2015.

He has the strongest chance of reaching F1 with Williams, despite his lack of recent results, given cycling team Israel Start-Up Nation has partnered with the outfit through billionaire Sylvan Adams who is doing everything he can to get Israel to the top of global sport.

Two-times Macau Grand Prix winner Ticktum has the pace to reach F1, and is highly rated for his simulator work in the development role, but doesn’t have the budget to surpass Nissany or the existing line-up unless, for example, he followed Russell into a Mercedes partnership.