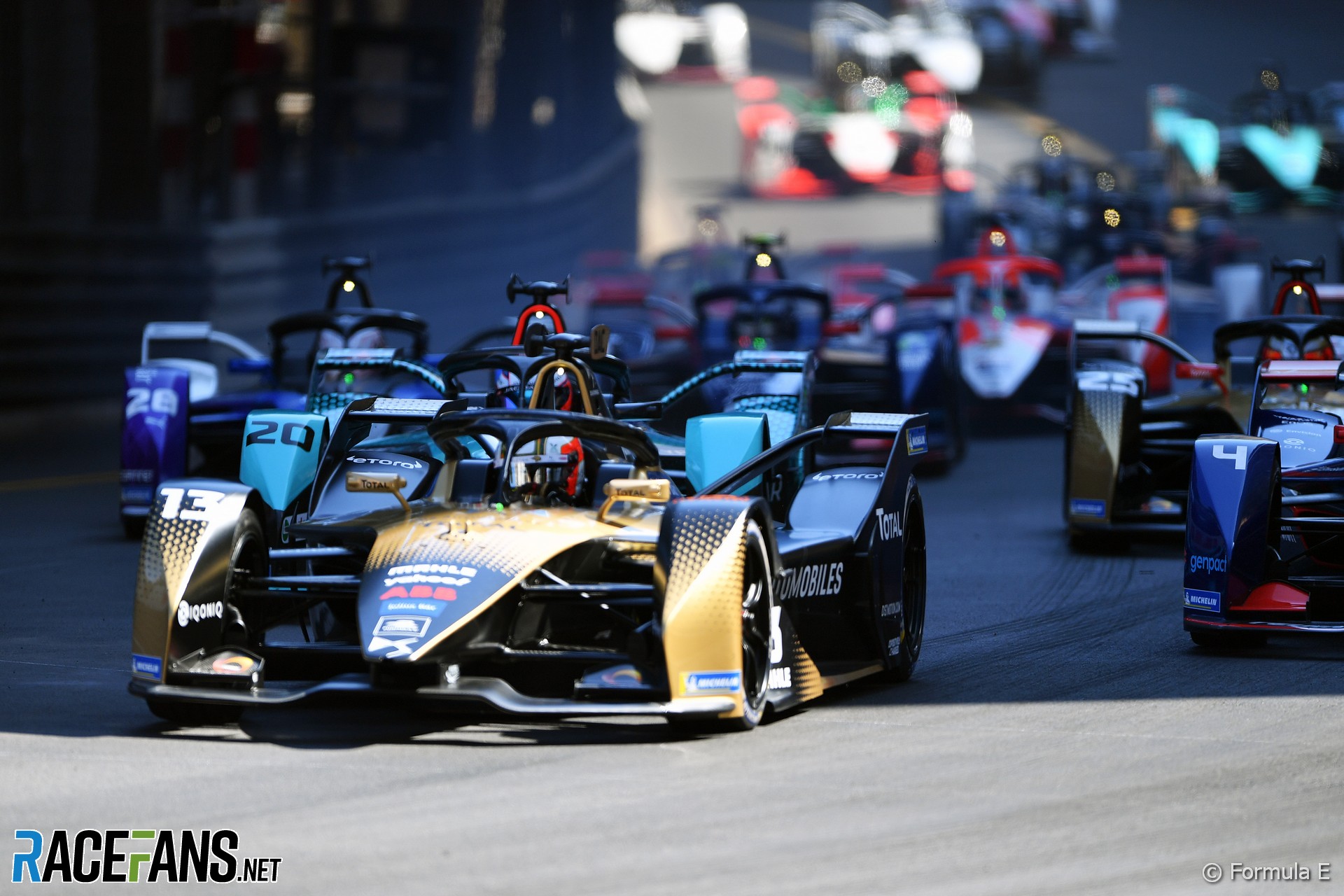 Antonio Felix da Costa won the Monaco EPrix in dramatic fashion, losing the lead from pole early on before fighting back to clinch victory with a last-lap pass.

The DS Techeetah driver took pole in an incredibly tight Super Pole session where four drivers on the front two rows qualified within 0.059 seconds of each other.

The real upset of qualifying was championship leader Nyck de Vries, who seemed to be trying to back the Jaguar cars behind him up before crossing the chequered flag for a hot lap. Whatever his strategy, it ultimately ended with him setting a poor lap, without the full 250kW for the second and third sectors, putting him right to the back of the grid at the race start.

Da Costa came off the line ahead but Robin Frijns, who started alongside him on the front row, was able to stay with the Techeetah driver in the early laps and sooner passed him. Da Costa responded by being first to take Attack Mode but wasn’t able to make good use of it, ending up under pressure from team mate Jean-Eric Vergne and Mitch Evans.

At the 30 minute mark, Vergne and Evans were locked in a battle which saw them go side-by-side through the chicane and Vergne force Evans off, to have to cut it. Although Evans took the place back and Vergne was also passed by Maximilian Guenther, the incident was placed under investigation. Evans was told to let Vergne back through, as he technically had passed him off-track and ended up also being passed by Da Costa.

The two were able to get past Vergne together, before Evans made a clinical move on Da Costa through Beau Virage with 15 minutes to go. Just seconds after, a Safety Car was called when René Rast stopped on track at the uphill section, just past turn two, during another dismal day for Audi that had steadily got worse from a mediocre qualifying.

Rast’s stricken car was awkwardly positioned and had to be rolled back down the hill, extending the Safety Car period. Racing restarted with just under six minutes remaining. Had it resumed a minute later, no energy reduction would have been imposed, under new rules brought in to prevent a repeat of repeat of Valencia’s energy management nightmare. Nonetheless all cars had enough energy remaining to finish the race, and did so in spectacular style.

An ugly day for Mercedes continued when Stoffel Vandoorne was forced into the pits in the final four minutes of the race. Neither silver car had been running in the points, while both Jaguar cars were in the top ten – a crucial swing in their battle for the title.

Da Costa was just inches away from Evans’ rear on the final few laps, with Frijns immediately behind him. Repeated, light contact between the leaders wasn’t helped by yellow flags in the middle sector due to De Vries stopping at the approach to Tabac, off the racing line.

The final lap began with Da Costa hounding Evans with shades of Nigel Mansell and Ayrton Senna. But unlike Mansell, Da Costa was able to make a move stick.

Bursting out of the tunnel for the final time Da Costa went for the outside into the chicane, tyres smoking as he brought his car to a near-stop in time to clip the apex. Evans was left a sitting duck, pushed down to third by Frijns before the flag. Vergne took fourth followed by Guenther, Rowland, Bird, Cassidy, Lotterer and Lynn.

Nonetheless, it was a good day for Jaguar in the championship. Although Robin Frijns took the lead in the drivers’ championship, both Evans and Bird scored while neither Mercedes car finished, eating a sizeable chunk out of the lead they had drawn out in Valencia.