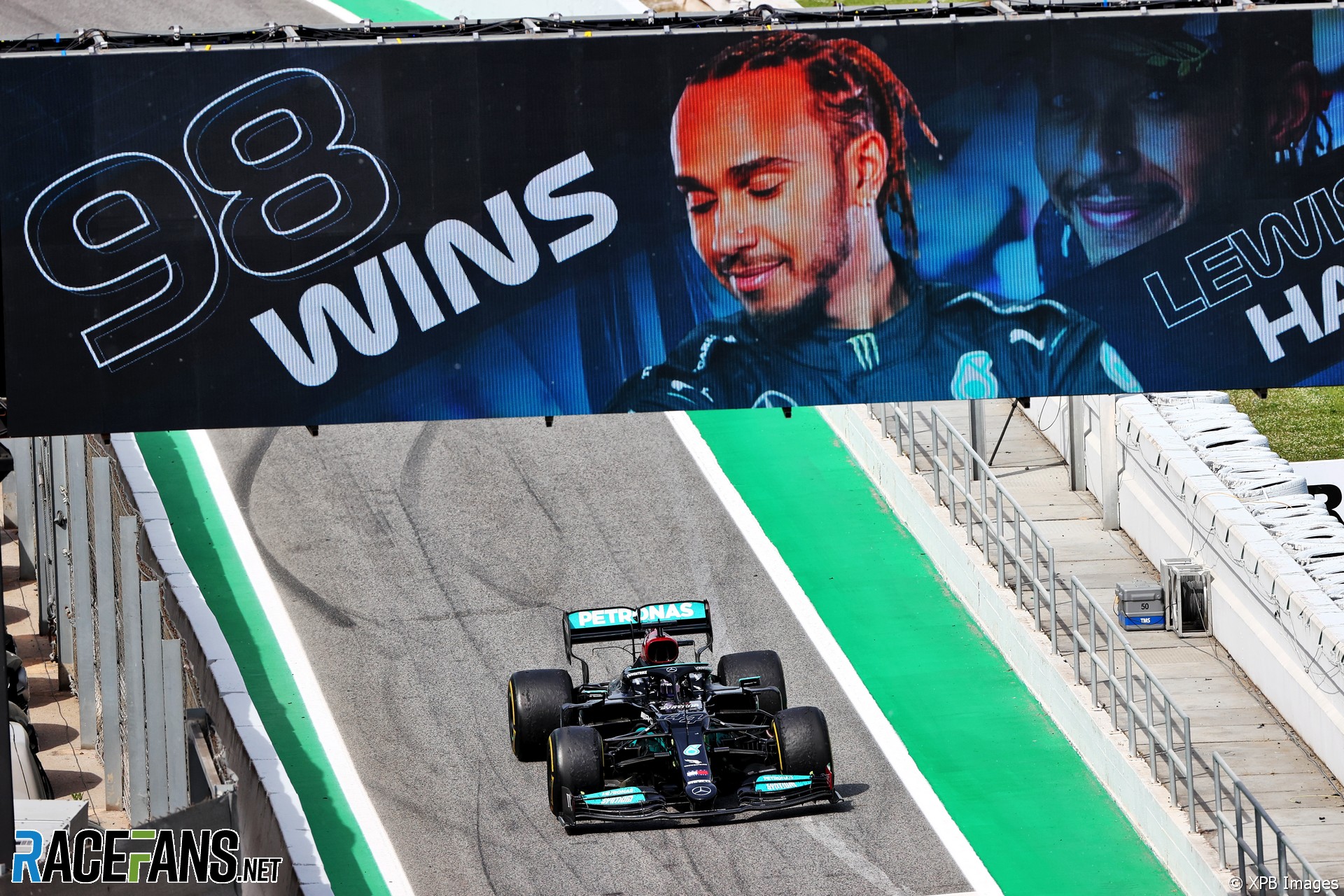 No Formula 1 driver has ever achieved a century of wins or fastest laps. Lewis Hamilton therefore achieved an especially notable landmark by becoming the first to take 100 pole positions on Saturday.

Every one of those pole positions was won in a qualifying contest determined by whoever set the fastest lap time. It makes the statistic a clear benchmark of his ability to conjure the best out of a Formula 1 car for a single flying lap.

That won’t be the case for much longer, however. In five race’s time F1 will hold its first grand prix where the starting grid for the race will be decided not by a qualifying session, but another race. While ‘won pole position’ and ‘was fastest in qualifying’ haven’t always been one and the same – for example, drivers have lost pole positions due to race penalties – they will be separated further by the first Sprint Qualifying race.

Since Hamilton broke the record for most pole positions back in 2017, surpassing Michael Schumacher’s former benchmark, the question has been how much further can he push it. Incredibly, if he takes two more pole positions, he will have raised the record 50% higher than the level Schumacher left it at.

On his grand prix debut with McLaren in 2007, Hamilton qualified fourth, 0.683 seconds off pole position and two-tenths off his team mate Fernando Alonso. This was in the days when drivers qualified carrying their race fuel loads, however. Once Hamilton persuaded McLaren to give him parity with Alonso, his first pole position soon followed at the sixth round of the championship in Canada.

Hamilton said his 100th pole position felt “very similar” to his first. “Back then it was where I was pushing for equality in terms of fuel load alongside my team mate,” he recalled, noting that breakthrough pole came “the first time they gave us the equal fuel load.”

He racked up poles more quickly than wins earlier in his career. As recently as 2019 his poles tally stood 11 higher than his number of victories. But amid stiffer opposition from Ferrari and Red Bull that year, Hamilton went on a 10-race spell without a pole position, his longest for eight years.

His strike rate of taking pole position for 37% of races he’s started is the fifth-highest of any driver who has competed in the sport. Pushing that figure higher is going to be difficult because of the sheer length of his career: His 270th race start last weekend means he’s already done over 100 more than Ayrton Senna and over 200 more than Juan Manuel Fangio, both of which lie ahead of him.

To beat Fangio’s record strike rate of 56.86%, Hamilton would have to take pole position for the next 125 races in a row, which would likely take him well into 2026.

Hamilton did match one achievement of Senna’s over the weekend, however. This was his fifth consecutive win in the Spanish Grand Prix, matching his hero’s achievement of winning the same race for five years in a row. Senna won the Monaco Grand Prix every year from 1989 to 1993 (he also won it in 1987, and crashed while leading in 1988).

At the rate Hamilton going, we’ll surely be writing about his 100th grand prix victory before too long. Yesterday’s was the 98th of his career. He did not complete a ‘hat trick’ by taking fastest lap, however. Max Verstappen beat him to that, taking the 11th of his career.

The Red Bull driver has now led more laps than Hamilton this year – 144 to Hamilton’s 75 – yet won just one of the four races. Hamilton is the only driver to have led every race.

McLaren continued their streak of scoring points with both cars in every race this year, though they were out-scored by Ferrari, who closed to within five points of them in what already looks like a close constructors’ title fight for fifth. Daniel Ricciardo led Lando Norris home for the first time as team mates, scoring points for the 15th race in a row.

Have you spotted any other interesting stats and facts from the Spanish Grand Prix? Share them in the comments.