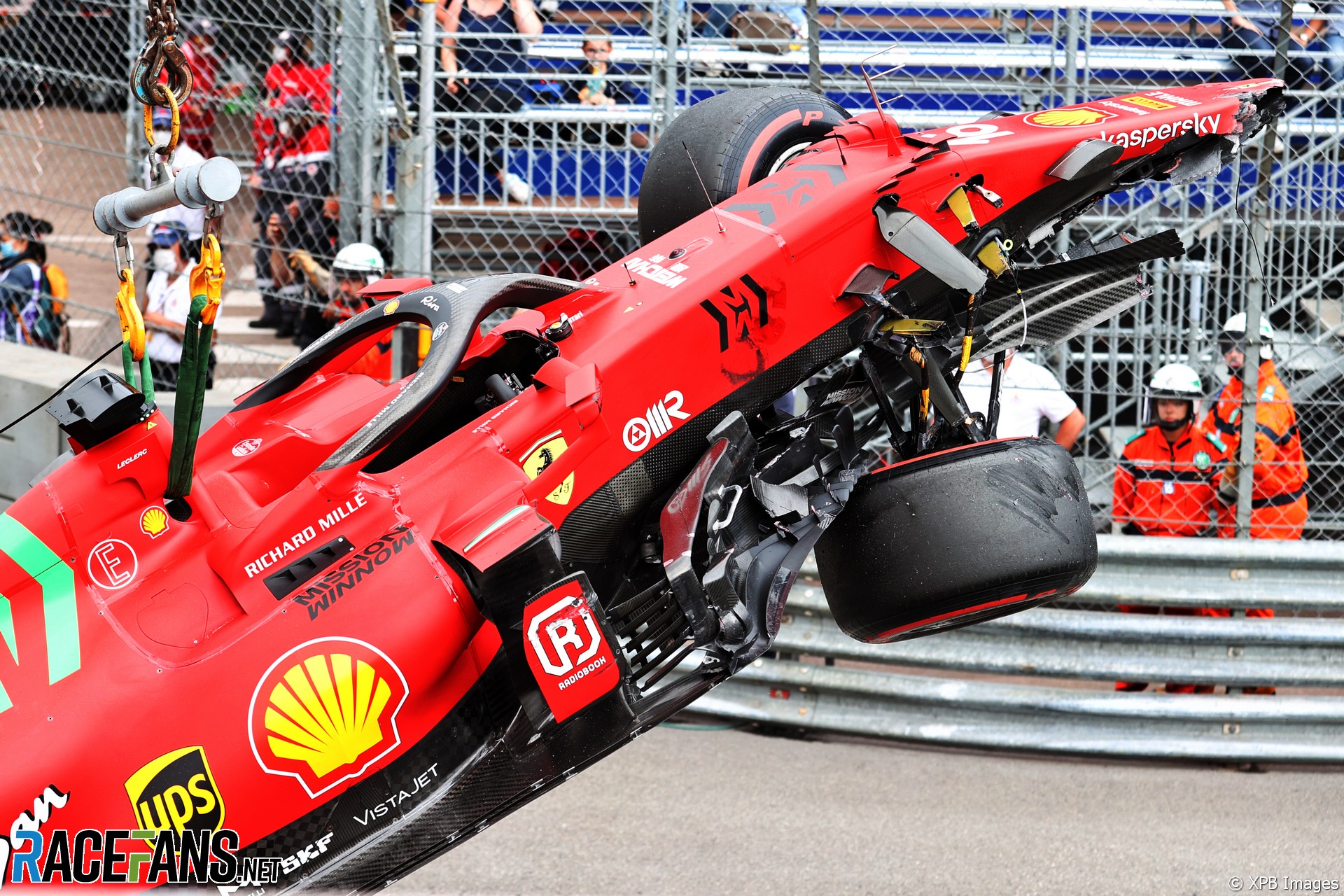 Charles Leclerc claimed pole position for the Monaco Grand Prix despite crashing on his final attempt to improve his lap time.

The Ferrari driver hit the barriers at the Swimming Pool complex at the end of Q3. He was already leading the session when the crash happened, and with no time left to restart the session, Leclerc was confirmed on his first pole position since 2019.

He will share the front row of the grid with Max Verstappen. Championship leader Lewis Hamilton qualified a lowly seventh.

Mick Schumacher’s impact with the barriers at Casino at the end of final practice ruled him out of qualifying. With one Haas driver already guaranteed to go out in Q1, the opening laps decided which other four drivers would join him.

Both Williams drivers were in the lower reaches of the times after their first runs. Nicholas Latifi efforts weren’t helped when he was held up on his way into the pits by Yuki Tsunoda, who didn’t realise he was being called to the weigh bridge until his team alerted him, and he had to be pushed back, delaying the Williams. Latifi was fortunate to be participating in the session at all, having also damaged his car in a crash during final practice.

Valtteri Bottas set the pace, being the first driver to lap the track in under 71 seconds. But there were three different cars behind him: Verstappen’s Red Bull, Leclerc’s Ferrari and Norris in the blue and orange McLaren.

The Alpine drivers were struggling with understeer. Fernando Alonso was in the drop zone when he began his last run and only made it as far as 17th.

He went out along with the four other rookies. Tsunoda ahead kept his thoughts to himself as his race engineer confirmed he’d missed the cut for Q2 by just two hundredths of a second.

Alonso will share the ninth row of the grid with Latifi, who was a tenth of a second slower than him. George Russell continued his run of Q2 appearances, beating his team mate by three-tenths.

Nikita Mazepin was over half a second further back, meaning he will share the back row of the grid with his team mate, assuming Schumacher is allowed to start.

The last driver to make the cut was Sebastian Vettel, who gambled on not taking a new set of soft tyres, and just barely got away with it.

With no one wanting the disadvantage of doing a standing start on medium tyres, everyone ran on softs in Q2.

The Ferrari pair were quick again and Sainz, showing his usual verve in Monaco, initially outpaced Leclerc, by a tenth of a second. Verstappen had the pair covered, however, with a barrier-skimming effort which put him top with a lap of 1’10.650.

The Mercedes pair were bumped back to fifth and sixth – Bottas ahead of Hamilton again – by Norris. But as the final laps began his McLaren team mate Daniel Ricciardo was at risk, holding onto the final place in the top 10.

“We’re looking for incremental gains this lap,” race engineer Tom Stallard advised him as he began his final effort. He had to slow to let Hamilton through before beginning it and fell short with his last effort, ending up 12th. “You’ve made good progress,” Stallard encouraged. “I don’t have much of an answer at the moment,” Ricciardo admitted.

Antonio Giovinazzi took advantage, bagging the final place in Q3 by less than a tenth of a second from Ocon, as neither Alpine reached the final 10. “That’s all there was guys,” said Ocon.

Lance Stroll got no further either, but Vettel took his Aston Martin into the pole position shoot-out. Kimi Raikkonen was left behind by his team mate. George Russell also went no further, his strategy of holding back at the start of the session to avoid traffic not paying off.

Verstappen laid down the first marker in Q3 with a 1’10.576, which Bottas immediately got within six tenths of a second of. Leclerc had more in hand, however, and banged in a 1’10.346 to provisionally take pole position.

Norris’ first effort was scuppered as he caught Sergio Perez at the end of his lap. The Red Bull driver in turn pointed the finger at Lewis Hamilton. Norris moved up to fifth with his last effort, with the second Ferrari of Sainz separating him from the lead trio.

Hamilton lay only seventh after his first run, out-paced by the AlphaTauri of Pierre Gasly, along with the others. The Mercedes driver asked for three timed laps for his final run in a bid to avoid a front-row start.

He didn’t get them – indeed, very few drivers were able to complete their final runs. A fully-committed Leclerc swiped the barrier at the inside of the right-hander leading past the Swimming Pool, breaking his steering, sending him over kerbs and firmly into the barrier at the exit of the corner.

That brought the session to a conclusion, with no change in the leading positions. Hamilton had clipped the barrier moments earlier and aborted his last run, leaving him seventh on the grid.