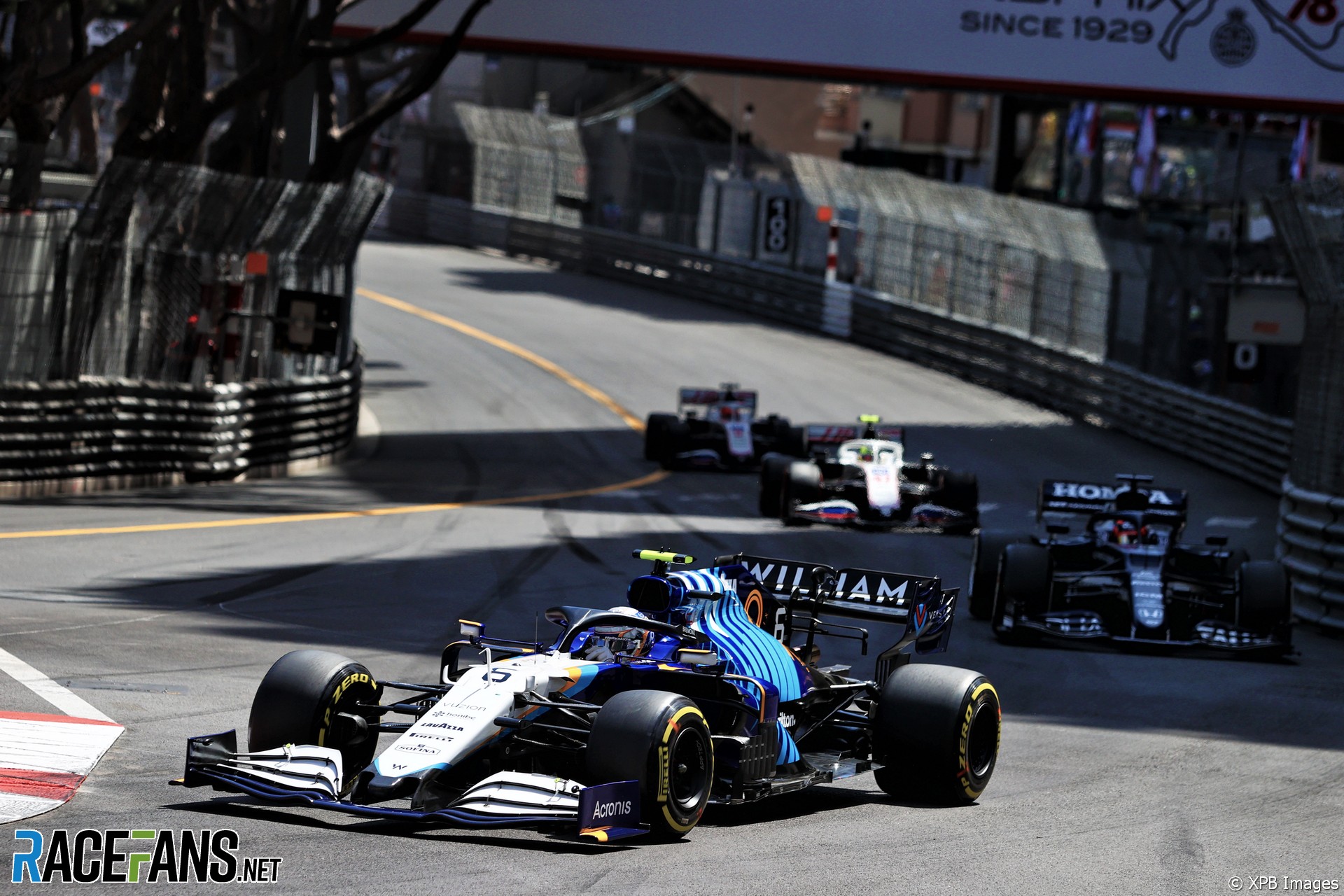 In the round-up: Two Formula 1 drivers had to endure 78 laps of Monaco without a drink – for different reasons.

Latifi and Raikkonen go without water in Monaco GP

Nicholas Latifi and Kimi Raikkonen raced around the Monte Carlo harbour for over an hour and a half without a drop of water in the race due to trouble with their drinks tubes.

For Williams driver Latifi, it turned out to be a self-inflicted problem. It didn’t seem to hamper his performance too much though, as he was only a second behind team mate George Russell at the flag.

“The only mistake I made was forgetting to put my my drinks tube in my mouth at the start of the race,” Latifi admitted afterwards, “so I just did the whole race and only realised afterwards that I didn’t drink anything.”

For Raikkonen, the problem appeared to be a fault that laid in the hands of his Alfa Romeo team, and didn’t take the lack of hydration for the duration of a F1 race as lightly as his rival did.

“One thing, again that fucking drinks pipe came loose on the formation lap,” Raikkonen said on the radio after finishing the grand prix. “It’s been behind my back the whole race the fucking filter, so I don’t know how it’s so difficult to put it, connect it correctly.”

McLaren team principal Andreas Seidl has reacted to Daniel Ricciardo being lapped by his team mate Lando Norris in Monaco by saying the team’s 2021 signing is finding it “not natural” to drive in a way “needed” for the McLaren MCL35M.

“I think if you look back since the beginning of the season, we have made good steps forward with him,” Seidl said of Ricciardo’s start to life at McLaren, which has included four consecutive points finishes prior to Monaco.

“In order to drive our car fast at the moment you need a special driving style, which is not natural for Daniel. That’s why it’s not easy for him to get the laps in and extract the performance.

“We simply have to keep working together now as one team, stay calm, keep analysing, keep learning. And do two things, which is [for] him further adapting to our car because obviously he sees that the potential is there. Which is I think the positive thing for him to see that and that Lando can pull it off.

“At the same time we look at the team side as well about what we can do in order to help him on the path to getting back this natural feeling that you need to go fast.”

The Formula Regional European Championship held two races in support of F1 at the weekend, the second of which ran to 19 laps on the morning of the grand prix. However when the final classification was published a few hours later, the results were taken based on lap 10 due to an overlooked quirk of the rule book.

The timekeepers for the race failed to take note of event-specific supplementary regulations they were supposed to work to. Article 8.2 of the championship’s sporting regulations was revised to read as “in the event where a race is suspended, the duration of the suspension will not be added to the planned duration of the race”. The word “not” was a significant difference from the usual text.

The change was made because F1 has to operate on a strict schedule when using Monaco’s streets, and so when the FREC race was red-flagged on the opening lap it should have ended half an hour plus one lap after its start time. Instead, after a 17-minute stoppage it was restarted with half an hour still on the clock. This was only noticed post-race, and after teams appealed to the stewards the results were corrected.

Despite the race being cut by almost half its length, the most significant change which arose was that a different driver took 15th place.

Name a better way to spend your Sunday… we’ll wait 😎 What an afternoon watching the #MonacoGP with the Miami Gardens Community. We can’t wait till we’re watching the #MiamiGP in 2022 together🏎💨 pic.twitter.com/Qbwk8J72Be

Of these, 4 people tested positive. The FIA and Formula 1 are providing this aggregated information from each Grand Prix for the purposes of competition integrity and transparency.

We made it! What an emotional day knowing that you have just 1 shot at making the race. Thank you to the whole team for the hard work. We definitely got in the hard way. Now let’s go racing #indy500 pic.twitter.com/nyRvnvjdSn

You ever have a “I can’t believe I get to live this life” moment?

Today’s was Chip Ganassi fist bumping me and saying “It’s all you Devin, all you” after his team won the Indy 500 pole.

Someone pinch me. This life is beyond what kid me has dreamed.

Enjoying a cup of coffee on the patio attempting to come to terms that I won’t be part of the 105th running of the #Indy500. And it’s hard. I have had a chance to collect my thoughts and so here they come… 1/

F1: Two drivers who are gaining absolutely nothing (Beyondtheflag.com)

For one of those two, this could arguably have been said last year as well. For the other, four races into his career, it’s already getting old watching him be in the situation he is in. Those two drivers are George Russell and rookie Mick Schumacher.

It was at Firestone that his co-workers played races on the radio, where they teased him for knowing nothing about racing. Where they took him to his first Brickyard 400 where Confederate flags and 'The South Will Rise Again' signs on pickups surrounded him. Yet, he fell in love with all that Indianapolis Motor Speedway and racing were about.

Valentino Astuti has escaped serious injury after a wild rollover which cut short round two of the Australian Formula Ford Championship at Wakefield Park.

Theo Pourchaire is now the youngest ever winner of a Formula 2 race at 17 years old, but who else joins him in the pantheon of teenaged winners in Formula 1’s primary feeder and support series?

Jean Todt has revealed to Italian newspaper Corriere that he regulary visits Michael Schumacher in his Swiss home, despite restrictions laid down during the Covid-19 pandemic.

Statement on the death of Max Mosley (Hacked Off)

After a long career promoting motor sport and general motoring safety, Max devoted the last 13 years of his life to campaigning for reforms to the regulation of the press after he was targeted by libellous coverage in the News of the World. This coverage was believed by Max to have been a factor in the suicide of his son Alexander, in whose memory Max later established a Trust which has supported ethics and accountability in the press.

The death of former FIA president Max Mosley has brought to the surface discussion about some of the controversial activities he took part in during his life, but many have also started talking about the under-the-radar work he did that wasn’t given the attention at the time for the progress it led to. Jack pointed out Mosley’s record on road safety that has contributed to many lives being saved.

As controversial as he was at times, he was unflinchingly effective when it came to improving safety in motorsport and road cars as chairman of EuroNCAP. Anyone who survived a big crash in a car built since the early 2000s probably has him to thank for their life.
Jack