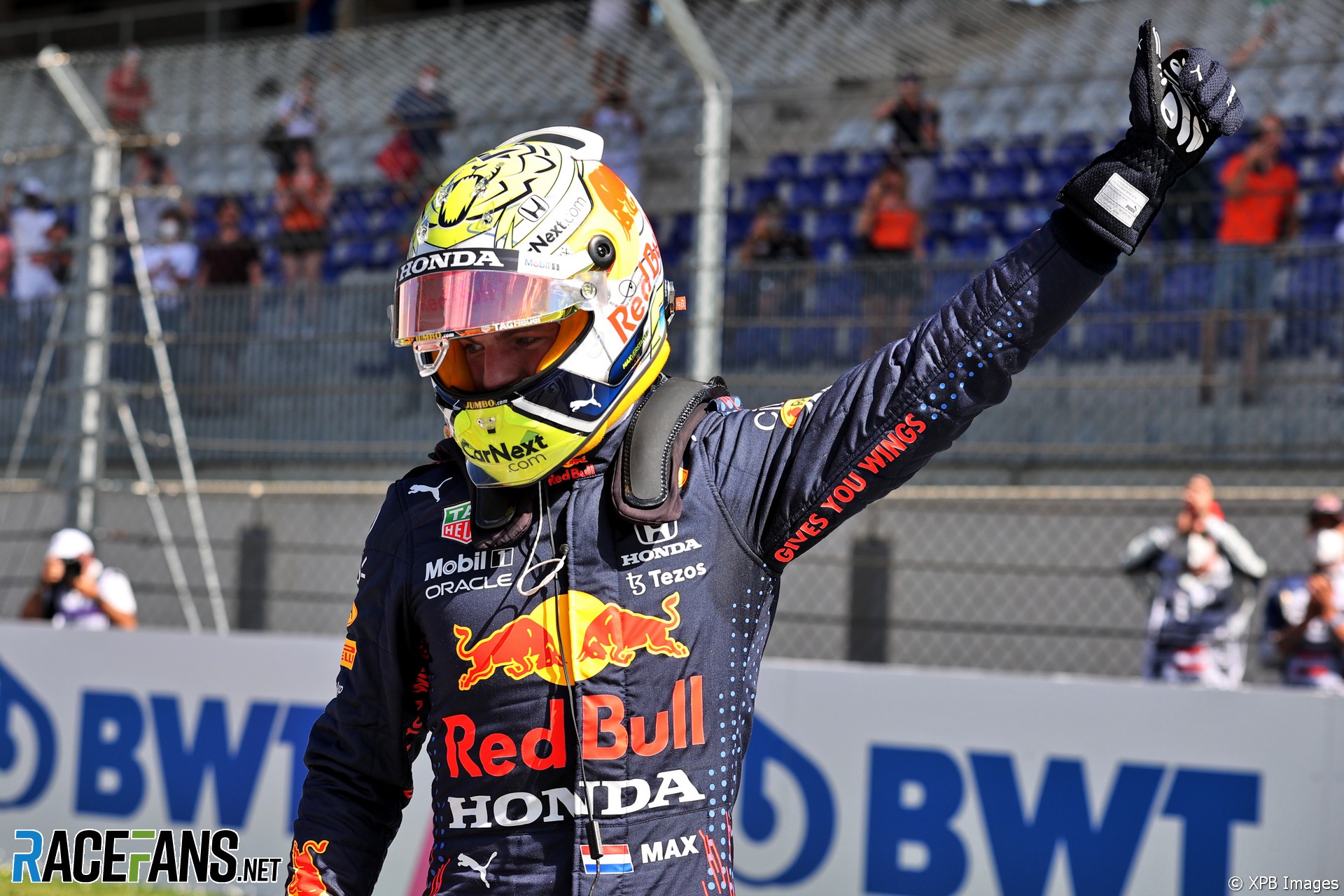 Max Verstappen will start the Austrian Grand Prix from pole position ahead of his championship rival Lewis Hamilton.

Valtteri Bottas qualified second, but will be relegated to fifth on the grid due to his penalty.

Verstappen led the times after the drivers’ first runs, less than five-hundredths of a second ahead of Bottas, who complained the Red Bull driver had cost him “two tenths” at turn four. Surprisingly, the McLaren of Lando Norris was also within a tenth of a second of Verstappen, and Hamilton a further tenth of a second behind.

That quartet declined to run again. But for those hoping to get through Q1 on a single set of tyres, Nicholas Latifi’s second run came as a disappointment, as the Williams driver vaulted up to ninth place. Having not had a sniff of a tow on that run, it was clear much of the time had come from his fresh set of tyres.

Latifi and the remaining 15 drivers therefore had one further run each. George Russell in the other Williams plus the Alfa Romeo and Haas drivers languished in the bottom five. Daniel Ricciardo was only safe by two-hundredths of a second, his first time having been almost a full second slower than his team mate’s.

The Haas drivers occupied the bottom two places, but Mick Schumacher made a mistake early in his lap and abandoned his run. Nonetheless team mate Nikita Mazepin was unable to capitalise and remained last. Along with Latifi, they were the only drivers to use three sets of softs.

Kimi Raikkonen also failed to improve sufficiently to bag a place in Q2, while Antonio Giovinazzi in the other Alfa Romeo lifted himself to 13th. That put him one place ahead of Ricciardo, who set the fastest first sector time of all as he snuck into Q2 by three-hundredths of a second.

Latifi slipped into the drop zone after encountering drivers pitting on his final run. Russell claimed his usual place in Q2. The surprise elimination was Esteban Ocon, the Alpine driver understeering wide at turn two on his final run.

Bottas logged a 1’04.724 soon after the session began, but his race engineer Riccardo Musconi was quick to advise him that it “wasn’t safe” and he’d have to run again to ensure a place in Q3. Hamilton’s first effort was even less safe, as he locked up and ran wide at turn three, and ended up six-tenths off his team mate.

Like the Mercedes pair, Verstappen began the session on medium tyres, while Giovinazzi surprisingly did likewise. The Red Bull driver set the second-quickest time, beaten by Pierre Gasly who used a set of softs. Sergio Perez in the other Red Bull also preferred the softs, but his first effort left him a tenth of a second off his team mate.

The first runs left Charles Leclerc in the drop zone – two hundredths of a second behind his team mate – accompanied by Sebastian Vettel, Russell, Ricciardo and Giovinazzi. The Alfa Romeo driver gave up the unequal struggle and switched to softs for his final run.

Hamilton’s last effort on medium tyres left him only eight hundredths of a second behind Gasly but the field was so close that still left him fifth. He remained safe, however, despite Perez jumping to the top of the times with a 1’04.197.

Norris also improved again, ending up a tenth of a second behind Perez. Ricciardo’s troubles continued – he was over half a second behind his team mate, which left him 13th and out of the session. “I don’t have much of an answer for today but we’ll figure it out,” he told his team.

While Lance Stroll progressed, Vettel was eliminated, both Aston Martin drivers having their final efforts deleted for running wide. Carlos Sainz Jnr also fell foul of track limits and dropped out, in a reversal of fortunes for the Ferrari drivers, as Charles Leclerc moved ahead of him and gained a place in Q3.

It was to little surprise that Giovinazzi and Russell failed to get any further, though the Williams driver came stunningly close. His final effort was just eight thousandths of a second shy of making the cut, Fernando Alonso’s final effort ending Williams’ hopes of seeing Q3 for the first time since 2018.

Hamilton chose not to run with the pack, and joined the track immediately after the final round of qualifying began. He set a 1’04.205, eight-thousandths off the mark Perez had laid down in the previous round.

The rest of the field joined them soon afterwards, Gasly speaking for many when he urged his team to help him find a place where he would benefit from the slipstream of his rivals. Despite setting a time good enough for sixth-fastest, he felt he could do better with “just a little tow – I know we did our best, but I could see the lap time in the straight just dropping massively.”

Verstappen lowered the best time of the weekend to 1’03.841 with his run, while Hamilton came around on his second effort shortly afterwards to cement second place, two-tenths of a second behind his championship rival. Norris continued his strong run by taking up third ahead of Bottas.

As the final laps began, Hamilton barged his way through traffic at the end of his out-lap, passing his team mate to take up a place behind Leclerc. But his haste was in vain, as a scruffy final lap ended with him running wide in the last two corners.

Bottas, who lost time behind Tsunoda on his first run, improved to second with his last lap. But his three-place grid penalty will drop him to the third row of the grid, and restore Hamilton alongside his championship rival on the front row.

Norris and Perez will also move up, to the second row of the grid, while Bottas lines up alongside sixth-placed Gasly. Leclerc and Tsunoda, who is under investigation, are on row four ahead of Alonso and Stroll.