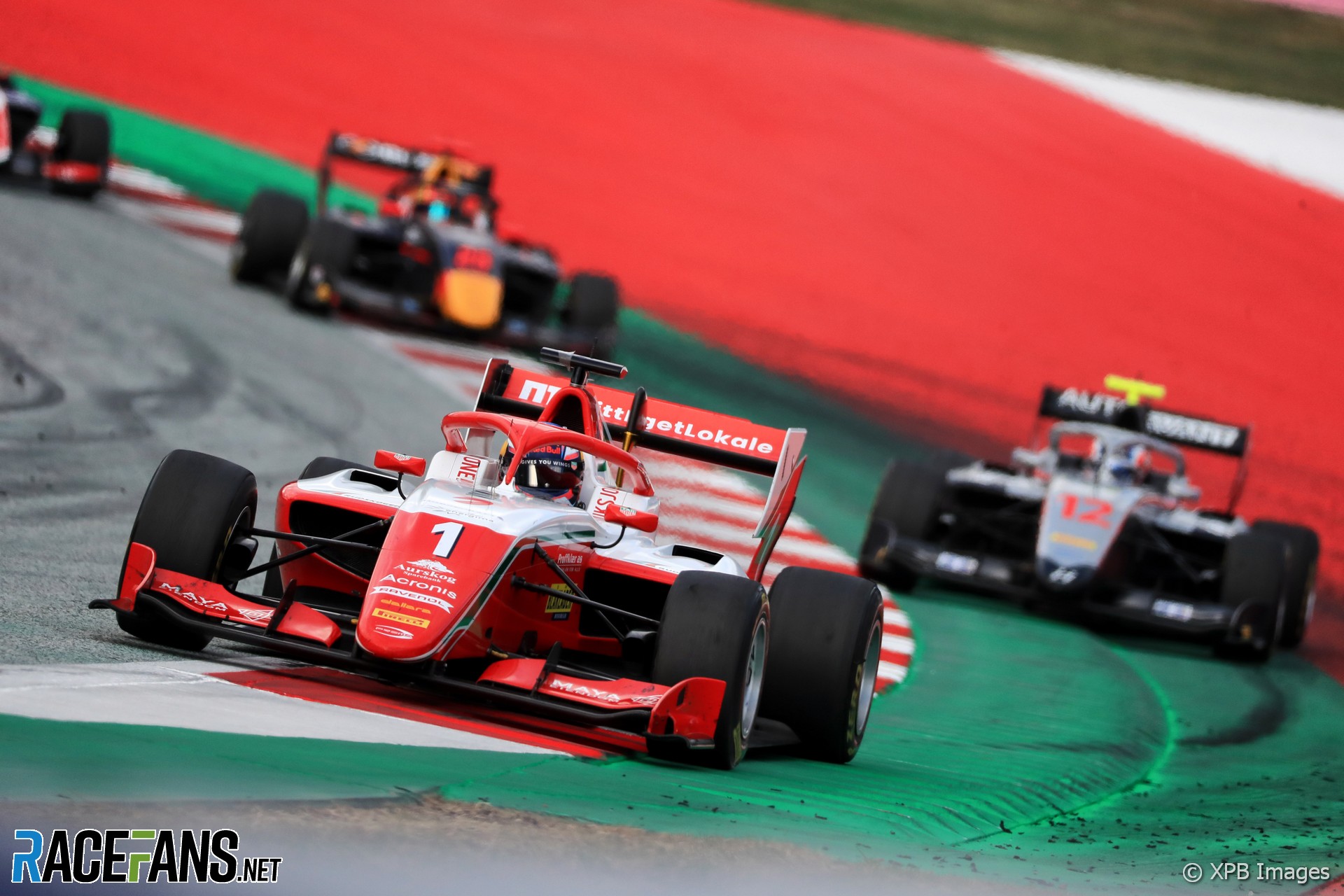 Formula 3 race one winner Dennis Hauger avoided a penalty when his team was found to have fitted a non-compliant part to his car. But several of his rivals were less fortunate as the stewards handed out 17 sanctions in a single day.

Hauger was investigated for the use of a rear plank which had been nominated for one of his Prema team mates. A piece of Arthur Leclerc’s car was fitted to Hauger’s in error.

As it was deemed to have been an administrative mistake which did not influence the performance of Hauger’s car, he avoided a sporting sanction. However the team was fined €7,500 euros and two rear planks have been deducted from the total allocation Hauger may use over the current season.

The spate of penalties began in race one and included the disqualification of Ayumu Iwasa was for “failing to comply with a black-and-orange flag”. The Hitech driver was shown the flag, signalling him to pit to have a technical problem addressed, due to a problem with the mounting of his onboard camera.

A communication problem between his team and race control meant Iwasa did not come into the pits. The stewards noted the decision not to pit him was Hitech’s “and as such agree that the issuance of penalty points is not justifiable and fair.”

Second-placed Olli Caldwell was given a five-second time penalty for track limits violations but kept his finishing position. An identical penalty dropped MP’s Victor Martins from fourth to fifth. Jak Crawford was also dropped from fifth to eighth for gaining an advantage on a occasion where he went beyond the track limits.

Jenzer’s Calan Williams was another to receive a five-second penalty, but so many other drivers received sanctions he rose from 19th to 16th in the final classification.

Caio Collet was penalised 10 seconds for track limits offences and Matteo Nannini had 30 seconds added to his race time in lieu of a 10-second stop-go penalty for repeated track limits violations, which dropped him from eighth to 23rd.

Nannini was also investigated for a clash with Trident’s Clement Novalak while they fought for the lead, but both were cleared of responsibility.

Just ahead of Williams in the final classification were Alexander Smolyar and Logan Sargeant. Smolyar finished 10th, but was found to have forced another driver off track and penalised five seconds as a result. Sargeant originally claimed Charouz’s first ever F3 podium in the morning, but he was one of the earliest to be investigated over track limits and a 10s penalty sent him down to 15th from third.

The final two runners to rack up penalties in the first race were Amaury Cordeel, with a 10 second sanction leaving him 22nd, one position ahead of Filip-Ioan Ugran, who got the same penalty as Nannini.

The primary beneficiary of all this was Trident’s David Schumacher, who gained seven places from 19th to 12th. It didn’t earn him any points, but did put him on pole for the reversed grid second race of the day and he made the most of it to take a controlling first series win.

Collet picked up a five-second penalty during that race for causing a collision, then earned another afterwards for track limits violations that dumped him to 16th. Rafael Villagomez fell from 17th to 19th, copping five seconds and a penalty point for a Virtual Safety Car infringement, and late in the night stewards also handed Ido Cohen a five-second penalty for track limits and dropped him to 20th place.

Kalyen Frederick and Juan Manuel Correa collided and both received penalties. Frederick got a three-place grid drop for his next race, while Correa’s repeated trips off track earned him a 20 second penalty in place of a drive-through.