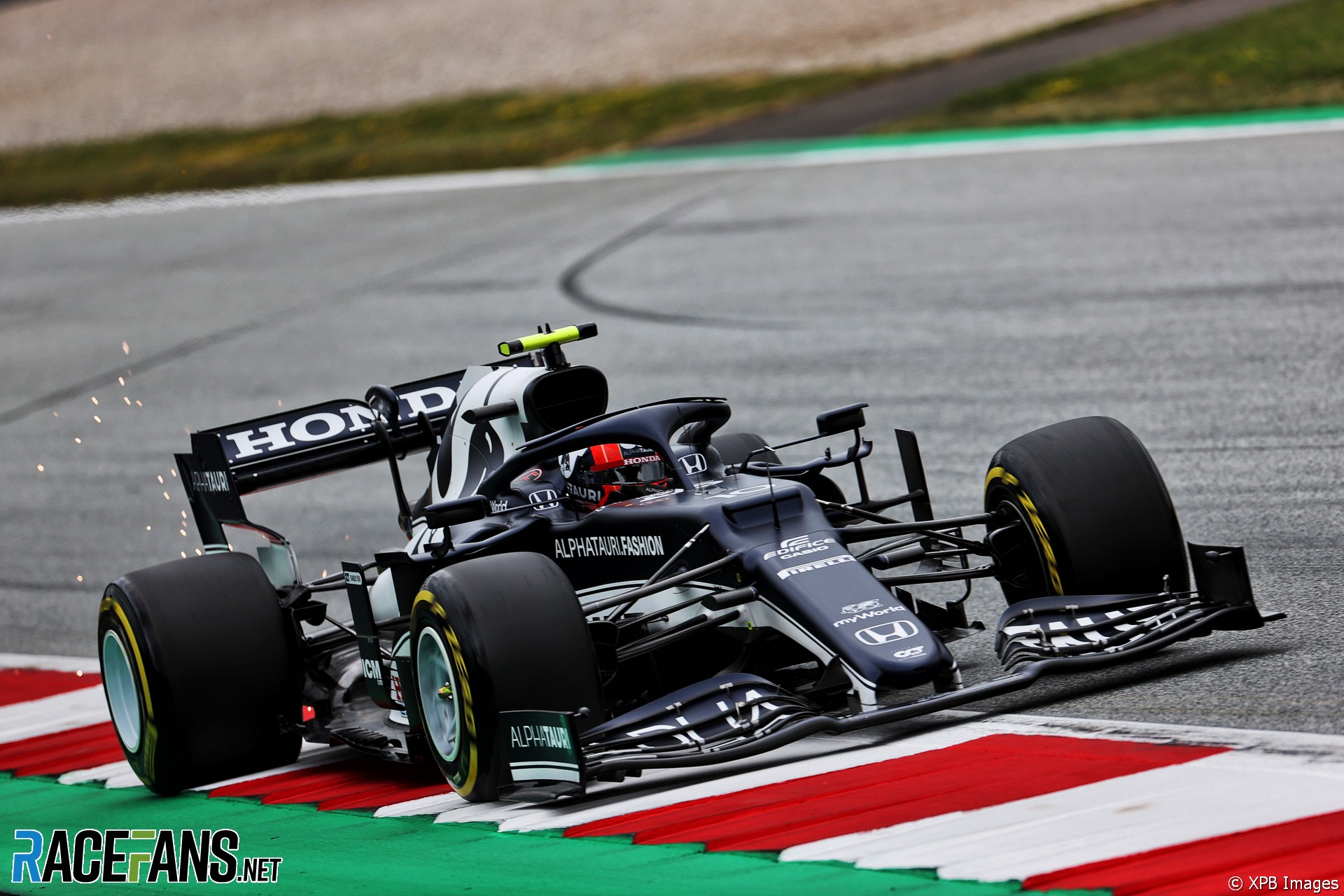 In the round-up: AlphaTauri’s Pierre Gasly says the cooler conditions of the Austrian Grand Prix aren’t suiting his team, but he still believes he can qualify in the top 10 again.

Gasly was seventh fastest in Friday practice for the Austrian Grand Prix, and believes he can qualify that far up the order tomorrow despite admitting to balance problems across the first two sessions of the weekend.

Gasly was asked after second practice whether his Friday pace, 0.856 seconds slower than that of the fastest Mercedes, could be continued.

“Yeah, I think so,” he said. “Today was slightly more difficult on my side. In these cold conditions, I struggled a bit more with the balance of the car. So I think performance-wise it looks good, we are still in the mix, even though I think we can make a couple of improvements for tomorrow.”

The grand prix winner was actually the slower of the two AlphaTauri drivers by 0.023s, with team mate Yuki Tsunoda ending Friday in sixth place.

Track limits violations were widespread across the field: Collet’s was one of over 70 recorded offences. Hauger kept it clean to earn his second pole position of the season. It was a tight fight at the front, as once Collet’s benchmark lap was deleted it left a top five split by less than a tenth of a second.

Hauger was fastest by 0.028 seconds, with the next places on the race three grid provisionally being occupied by Frederik Vesti, Alexander Smolyar, Collet and Jak Crawford.

By qualifying 12th, Charouz’s Logan Sargeant will be on pole for the reversed grid first race of the weekend on Saturday morning. He felt he could have bettered Crawford had it not been for traffic. The session also saw a collision in the pit lane between Johnathan Hoggard and Reshad de Gerus.

Chadwick back on top in W Series

A change of car for W Series champion Jamie Chadwick returned her to the top of the times sheet in qualifying at the Red Bull Ring, as she took her fourth series pole by 0.118 seconds.

The session was interrupted when Sabre Cook crashed after exiting the pits. Points leader Alice Powell’s change of chassis since round one (as is required by the series) left her down in 13th place, ruing car problems.

Penske’s Josef Newgarden set the pace in the first IndyCar practice session at Mid-Ohio on Friday.

He led the way with a 1’07.2524 lap which put him a quarter of a second up on McLaren SP’s Patricio O’Ward in second place. Meyer Shank’s Jack Harvey was a third of a second back in third place, and Andretti’s Alexander Rossi was fourth fastest.

Ryan Norman made his first ever appearance in an IndyCar session his Dale Coyne with Rick Ware Racing-run car and was 22nd fastest, which put him ahead of series returnee Santino Ferrucci.

Another returnee is Felix Rosenqvist, who has missed two races through injury, and he caused a red flag stoppage when he spun at turn one.

their point being that they needed a valve upgrade to overcome reliability issues. Since we couldn’t find an occasion when they had suffered a DNF related to a valve issue we asked Charlie Whiting. He replied that
‘you can break anything you want to break in a dyno’ 🤷‍♂️ #F1

@F1 what does a man have to do to get his name spelled right – let’s try this again, Ma Qing Hua @gyzhou_33 well done brother, so proud of you! pic.twitter.com/gBbGQ3c6x3

|@gyzhou_33 is the first Chinese driver to participate in an official #F1 session since @maqinghuaF1 for Caterham at Shanghai in 2013. #AustrianGP pic.twitter.com/RamO9fOAX8

Graham Rahal: "Qualifying (for the Indy 500) shouldn’t be any points. I don’t care what anybody says. Double-points is questionable."

"With a serious lack of fresh drivers to consider for prized openings, Grosjean could be in the crosshairs of Andretti Autosport, McLaren SP, Rahal Letterman Lanigan, and Penske. That is, of course, if he doesn’t opt to return to DCR. Of all the aforementioned teams, Andretti is where I hear Grosjean’s name most frequently mentioned."

"Australian GP Corporation chiefs were tight lipped when asked what impact the federal government’s new plan to cut international arrivals by 50% would have on one of the country’s flagship events."

Making a car look good in green is harder than you think. Aston Martin have said they were evaluating how to make their British Racing Green colour scheme look good on television without compromising the iconic hue. It may sound trivial, but it matters for sponsorship, and it turns out it’s not the first time that liveries have differed between the real world and the screen according to Steve Clark

I’m sure it’s a difficult thing I get right for TV. I remember going to the IndyCar races in Toronto in 90’s and being so surprised that the red Marlboro Penske’s from TV were more of a dayglo bright orange than red in person.
Steve Clark