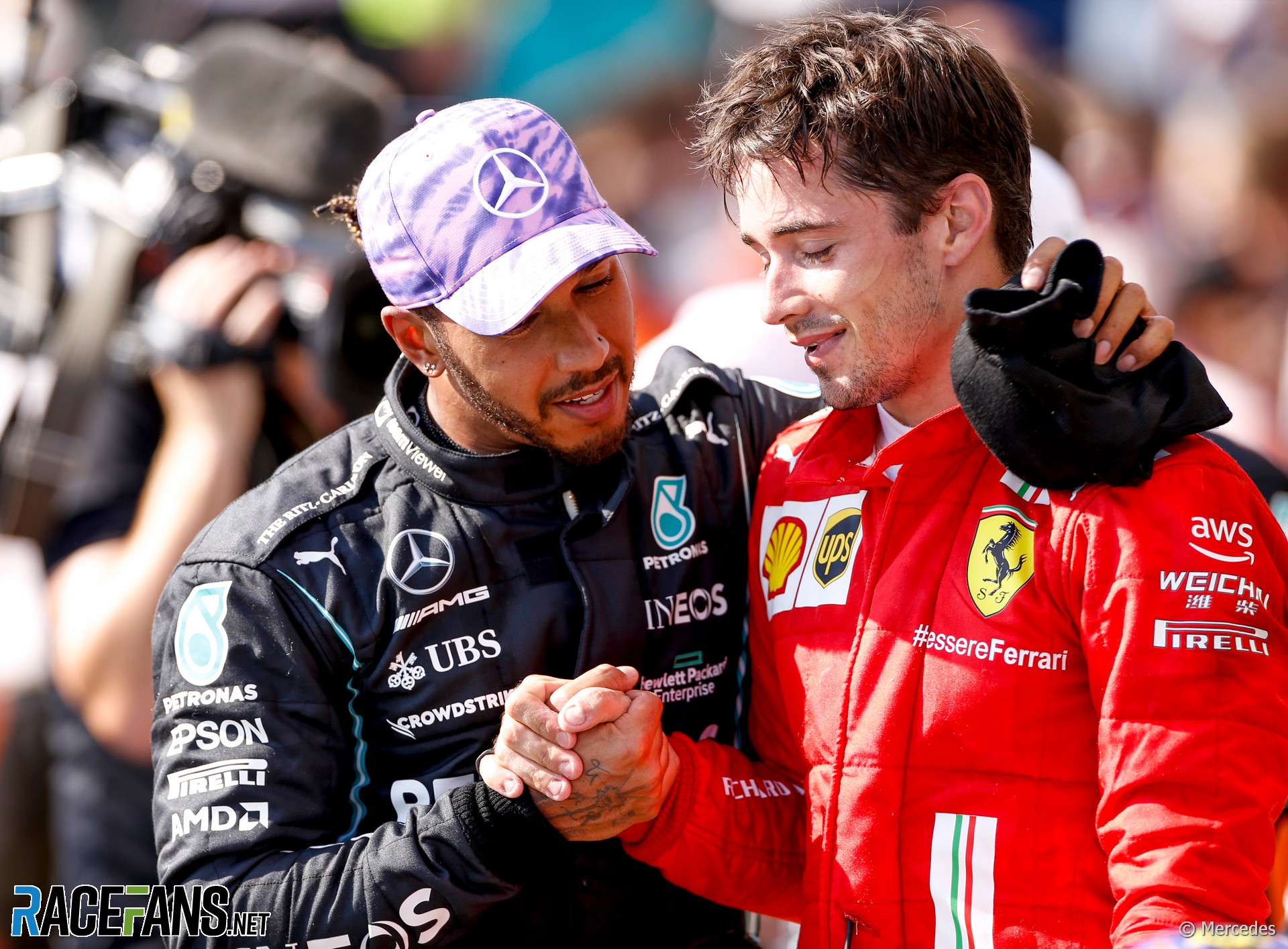 Lewis Hamilton says his pass on Charles Leclerc at Copse, which won him the British Grand Prix, showed how his first-lap move on Max Verstappen should have worked out.

Verstappen and Hamilton tangled at the same corner on lap one, firing the Red Bull into the barriers at high speed. The Mercedes driver was given a 10-second time penalty for the collision, which he served during the race, but was able to catch and pass Leclerc to win.

Hamilton tried to pass Verstappen at the same corner in the previous day’s sprint qualifying race, without success, and said it was on his mind as they headed towards Copse again today.

“We got a good start and I was chasing down Max, similar to yesterday,” he explained. “Obviously I was alongside him into six [Brooklands], but I had to concede. And then I got a great tow down to turn nine [Copse].

“Yesterday I went down the left-hand side and I really regretted not going for the gap that was down the right-hand side. And so I dummied him, moved to the left and then moved to the right for that gap. And I was pretty far up alongside him, but I then could see he wasn’t going to back out. We went into the corner and then we collided.

“Of course that’s never the way that I ever want to win a race or just in general to race but these things do happen. I just hope he’s OK and I look forward to many more races.”

Verstappen was taken to the medical centre and then to hospital for precautionary checks. Hamilton said he intends to check up on his rival.

“I heard that Max is in hospital and and that definitely concerns me. None of us ever want any of us to ever get injured. That’s never my intention and I really hope that he’s okay. I’ll hit him up after this just to check that he’s okay.

“We live to fight another day. We’ll still be a lot of tough races coming up and we have to learn to strike some balance.”

“I don’t really have anything to say to Christian. It doesn’t feel hollow. There’s 2,000 people that work incredibly hard in my team – it’s not just about me, naturally.

“I’ve already said that this is not the way of anything that I want to happen in the race. I think it’s important for all of us to take a step back. I’m sure emotions are running high there and I know what it’s like to lose points within a team and be in that position, so I don’t feel any way about it.”

The stewards deemed Hamilton was largely responsible for the collision. “I don’t agree with the stewards,” he said, “but I take my penalty on the chin and get on with my job.

“I’m not going to whine about it. Everyone’s going have a different opinion, I don’t particularly really care what people think.”

Hamilton believes both drivers were partly responsible for the collision. “I would like to think that we should generally grow and learn from these experiences.

“There’s rarely an incident that’s one hundred percent someone’s fault. It’s always a mixture because it’s two people or more, obviously. So I think there’s things that we can both learn.

“I would say that Max is probably one of the most aggressive drivers here, just from my personal opinion. He does a great job, of course. But I think we have to really try and find the best balance we always can on-track with space and respect between one another so that we can continue racing and have good races without colliding.”

The collision between Hamilton and Verstappen at the start was in contrast to Hamilton’s move on Leclerc at the same corner with three laps to go. The Ferrari driver ran wide as he tried to keep Hamilton behind.

“He was very respectful in terms of leaving a gap,” said Hamilton. “I got to be somewhere alongside him, he knew that I was there, but he stayed committed and just did a wider line and he nearly kept it. And that was really great racing.

“For me, in that moment, I backed out at one point just to make sure that we didn’t come together. But I think it was just a really nice balance and I think that’s really how the racing should go.

“Of course, in a perfect world, that’s what would have happened in the first attempt. But different time, different place, different driver.”

290 comments on “Hamilton: Pass on “respectful” Leclerc shows how Verstappen move should have gone”