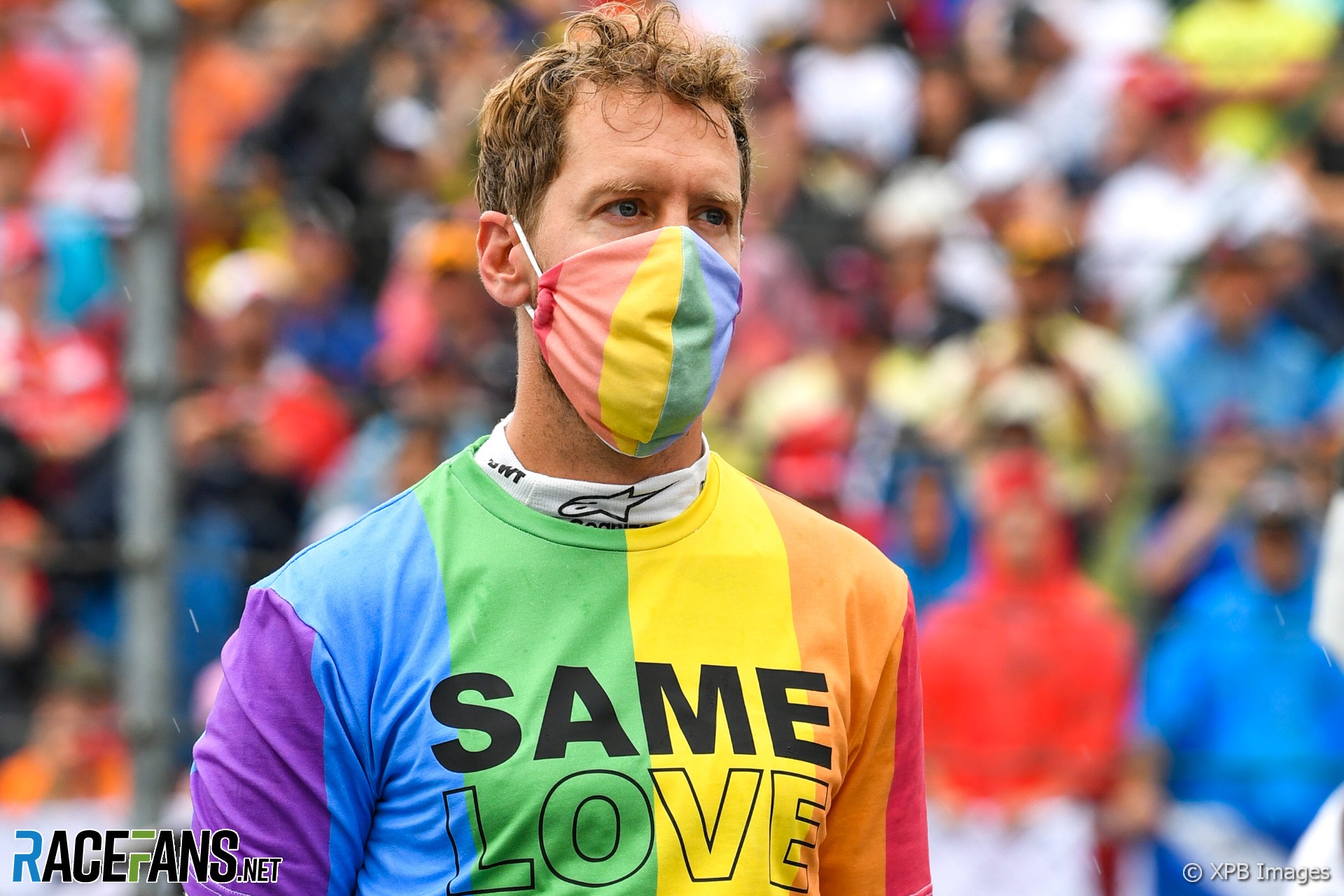 Sebastian Vettel was reprimanded after he wore a gay pride T-shirt during the pre-race national anthem ceremony at the Hungarian Grand Prix.

However the Aston Martin driver’s shirt, with its rainbow pattern and ‘Same Love’ message, was not the cause of the FIA’s displeasure. Three other drivers – Carlos Sainz Jnr, Lance Stroll and Valtteri Bottas – were all given the same reprimand for the same infringement, though they had different shirts on during the ceremony.

Following the introduction of the pre-race ‘We Race As One’ observance last year, the FIA has revised its carefully-framed protocol on what drivers must do during it and the pre-race national anthem performance. This is a sensitive area, as causes drivers may wish to indicate their support for may clash with the policies of the countries they race in.

In Hungary, they smashed head-on. In the FIA press conference before the weekend began, Vettel slated the Hungarian government’s recently-introduced legislation banning the teaching of gay issues to those under 18. “I find it embarrassing for a country which is in the European Union having to vote or having some laws like this,” he said.

Earlier this year Vettel criticised football’s governing body, UEFA, for forbidding a football stadium in Germany from being illuminated in the rainbow colours of the pride flag ahead of a game between their national team and Hungary. In Hungary, Vettel was bedecked in the same stripes, which appeared on his trainers and face mask, and on the T-shirt he wore to the ‘We Race As One’ ceremony.

None of this put him at odds with F1’s rules. However in the information distributed to drivers ahead of the race all were reminded to “remove their t-shirts and move to their name card position for the
national anthem, wearing their race suits”. Vettel in his T-shirt, and the other three who were wearing GPDA shirts, left theirs on, which is why they were reprimanded.

“It was observed by a number of people, including the media delegate who was out there, and myself on television,” said FIA Formula 1 race director Michael Masi.

“Earlier this year we clarified [it],” Masi explained, “following discussions internally with the FIA and F1. We said we wanted to keep giving all of the drivers the ability to have the moment to show effectively their support for ‘We race as one’ however they chose to. But then the national anthem for a particular country should be respected with the drivers all wearing their race suits.

“So it was clarified and made very clear that once that moment was displayed and the drivers showed their recognition, they would have to remove their shirt or anything else they wore and go to the national anthem in their race team uniform. And that’s been the same for a number of events now.”

The quartet were given one of the most lenient penalties available, said Masi. “A reprimand’s the lowest penalty other than a warning, which really is not a penalty, it’s a warning,” he said.

But was it lenient enough? F1’s rules do mean this non-sporting infraction could lead to a sporting penalty.

Any driver who collects three reprimands automatically receives a 10-place grid penalty. This has previously happened to Pastor Maldonado in 2012 and Mark Webber in 2013.

Under F1’s rules, only one of the three reprimands can be for a non-driving infringement in order to trigger a penalty. Therefore all four drivers are now one-third of the way towards a penalty, but further non-driving reprimands will not move them closer to one.

This is not entirely new. After the national anthem performance was introduced in 2014 drivers were told they would be at risk of a reprimand if they failed to turn up on time. Vettel was one of the drivers who came close to picking up a penalty after being reprimanded for showing up late for an anthem performance.

The prospect of drivers being penalised in a race for actions that have nothing to do with the competition will not sit well with many. But Vettel made it clear he won’t be dissuaded from supporting a cause he feels passionately about.

“Disqualify me, I’m happy to,” he said on Sunday. “I keep the shirt on for the national anthem in support of those people that suffer in this country because some make laws that I think, rather than protecting children, is probably threatening these children and compromising the way they grow up. That’s why I’m happy to take any penalty they want to give me for that.”

155 comments on “What was the FIA’s problem with Vettel’s pride T-shirt, and could it lead to a penalty?”