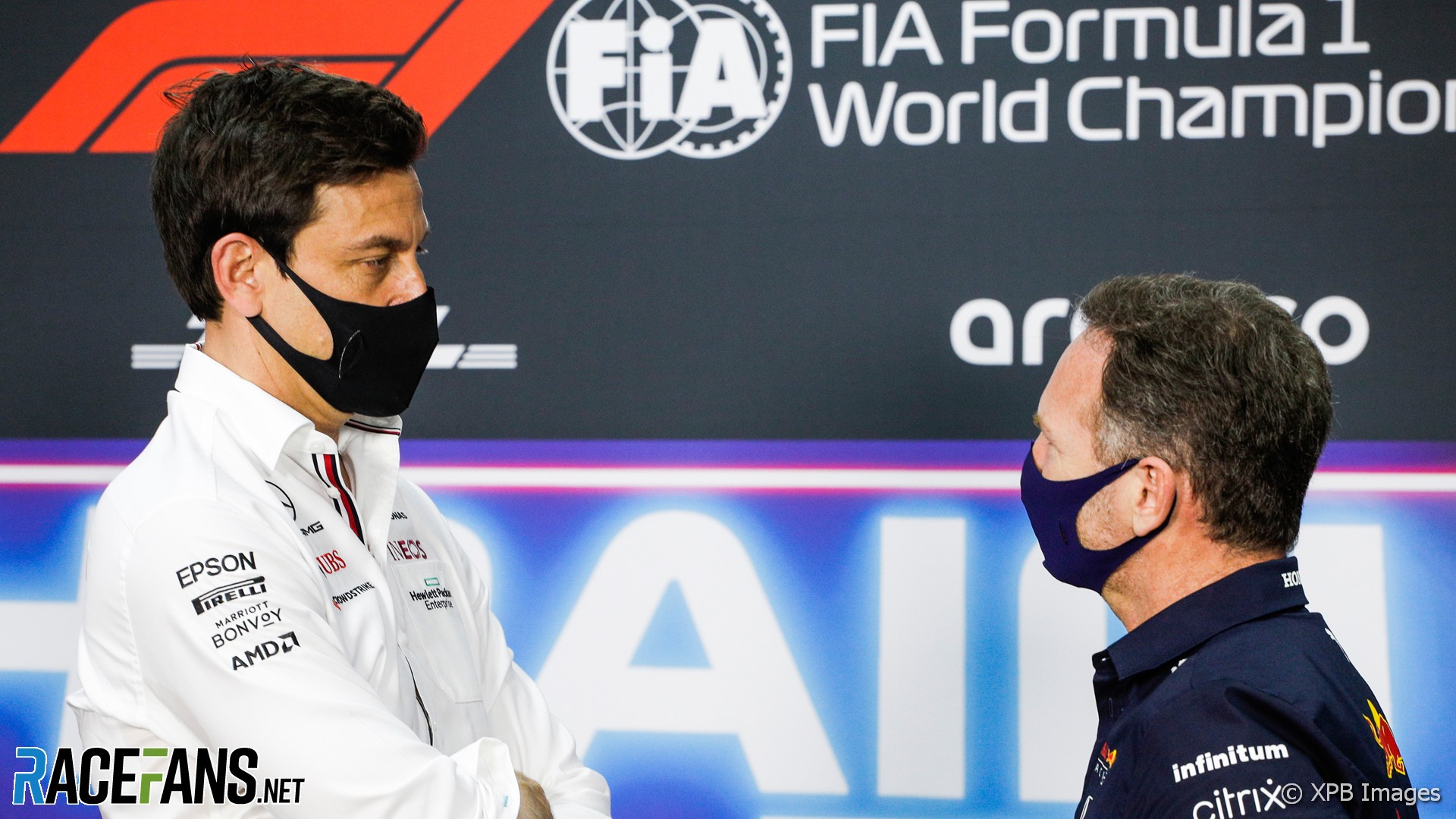 Both competed at international level prior to assuming executive roles in Formula 1. Both set records for team principals, and every world championship title since 2010 – whether driver or constructor – has been overseen by one or the other.

Horner was once spoken of as successor to Bernie Ecclestone as boss of F1. Later, as revealed here two years ago, Wolff was in the frame for the same role under Liberty Media. Neither was appointed, and the word in the paddock is that each blamed the other for losing out.

Both represent companies that are leaders in their sectors, having effectively founded their industries: Mercedes, via parent Daimler-Benz the automobile; Red Bull the premium energy drink market after proprietor Dietrich Mateschitz tasted a local drink while suffering from jetlag in Thailand, recognised its potential and acquired the rights and recipe.

Mateschitz is staunchly Austrian and, once he made his fortune, partly used it to rejuvenate the Styrian region from which he hails. The Red Bull Ring is just one example of his local investment. Another is the upgrades to the Zeltweg airport situated within sight of the circuit: once reserved exclusively for military use, his funding provided the impetus to open the facility to civilian aircraft.

His Servus TV station holds F1’s rights in the country – sub-leasing certain rounds to state broadcaster ORF – while the Red Bulletin is a premium lifestyle publication. Indeed, everything about Mateschitz’s operation is premium: from the chefs in his Hangar 7 restaurant situated alongside Salzburg Airport to the quality of materials and workmanship of his AlphaTauri fashion range. Similar premium standards apply to Mercedes.

A coterie of top names in the sport sometimes dubbed the ‘Austrian F1 Mafia’ have passed through or stayed at both teams. Red Bull’s technical operations director during its first two years of operation was Guenther Steiner, an Italian of the South Tyrol region, a former Austrian province. The future Haas team boss was recruited to Jaguar from its sister Ford World Rally Championship team by Austria’s three-times F1 champion Niki Lauda, who was overseeing Jaguar at the time.

Lauda arrived at Mercedes in 2012 as non-executive director and played a key role in recruiting Lewis Hamilton from McLaren. In January 2013 Wolff joined Mercedes from Williams having been parachuted into that team (without prior experience) as a minority shareholder after incumbent Adam Parr left.

Wolff, too is Austrian, having been born in Vienna to a Romanian father and Polish mother. Mateschitz’s F1 consultant Helmut Marko, the former driver who holds a doctorate in law, grew up in Graz and befriended Lauda and Jochen Rindt, posthumous winner of the 1970 world title, at an early age. He also mentored Gerhard Berger, Austria’s most recent grand prix winner.

Berger, Red Bull’s first brand ambassador, joined BMW as motorsport director after retiring from the cockpit, and was approached by Mateschitz to partner him in acquiring Toro Rosso. They appointed the Bavarian team’s Tyrolean trackside operations manager Franz Tost, a former F3 race and driver manager to Ralf Schumacher, as team boss – a role he holds to this day with the AlphaTauri team

By then Steiner had been asked by Mateschitz to relocate to the USA to co-founded Red Bull’s NASCAR team before starting his own Fibreworks composites operation, which he ran until establishing Haas F1 Team on behalf of machine tool magnate Gene Haas for the 2016 season.

But it has taken until now for Mercedes and Red Bull’s paths to cross as true title rivals. Only this year have the Honda units Red Bull switched to after splitting with Renault been on par with Mercedes in most aspects – and potentially ahead in some – which has given rise to the most acrimonious rivalry between teams in over 10 years and arguably this millennium.

The animosity between the two team bosses – tempered by mutual respect in view of their respective achievements – and their teams is well documented, with both taking some very public jabs at each other over the years.

Wolff is perceived among the Red Bull clan as an opportunistic arriviste. To Mercedes, the fact a ‘mere’ drinks company is able to take the fight to the hallowed Three-Pointed Star grates. The hiring of a number of top engineers and managers by the nascent Red Bull Powertrains operations from Mercedes High Performance Powertrains situated just 50 kilometres away has hardly eased tensions. That Red Bull soon has full constructor status equal to that of Mercedes aggravates the situation.

During this year’s Austrian Grand Prix saw a race-weekend edition of the Red Bulletin chronicle “The Secret Life of Toto W”, going to pains to list some of the exploits of “Torger Christian Wolff” as a former race and rally competitor – on occasion with Red Bull backing. That said, the visuals featured some heavy crashes the “young man with nice hair and a plastic watch” was involved in.

Given the complex compatriotic relationships between so many of F1’s major players, is it any wonder that such ‘needle’ exists between Mercedes and Red Bull, that each relished any opportunity of side-swiping the other?

A paddock source with inside knowledge of the various relationships is adamant that there is unbridled loathing amongst certain individuals. He used as example an Austrian Grand Prix race day breakfast organised a few seasons back by ORF for the full Austrian contingent.

The event was not repeated after certain individuals refused to be sat next to others. That the breakfast happened at all was amazing, for at first the venue – Red Bull or Mercedes – was under dispute before the former was eventually agreed upon.

Prior to the explosive collision between Hamilton and Max Verstappen at Silverstone came the controversy over Red Bull’s rear ‘flexi-wings’, sparked by comments made about Red Bull’s devices after this year’s Spanish Grand Prix. That one rumbled on until this year’s French Grand Prix – where deflection tests were tightened – with Horner hitting back by suggesting that the Mercedes front wings also flexed.

“You can’t look at one part in isolation and say that set of rules applies only to that element on that car,” he said, adding, “I think if I was Toto with the front wing he’s got on his car, I’d keep my mouth shut.”

True, Wolff has enjoyed the longer run of successes, but that could be put down to Red Bull’s lack of competitive power units. The team relied on Renault power for five of the hybrid seasons, during which period they proved no match for the Mercedes units. When Red Bull in 2015 came knocking at Mercedes for power units, Wolff is said to have blocked their overtures despite co-director Lauda having been in favour.

That was, of course, totally understandable when seen purely from Wolff’s perspective, for Red Bull have oft been deemed to have the better chassis – designed under the guidance of Adrian Newey – and would have been difficult to beat if combined with the then-gold standard hybrid engine. Thoughts of Hamilton in a Mercedes-Mercedes versus Verstappen in a Red Bull-Mercedes (or Mercedes-Mercedes, for that matter) remain tantalising.

Silverstone marked a new low, where Red Bull’s title hopes suffered a massive blow technically, sporting wise and commercially in the 51G accident which will have cost Red Bull over a million bucks to repair by the time all is replaced. Plus, as it subsequently transpired, a near-certain engine penalty in the future as a result of the damaged power unit.

As is their right in terms of the International Sporting Code Red Bull requested a review of the penalty based on their conviction that the penalty was too lenient. Independent sources with knowledge of their submission state that at no stage had Red Bull made any accusations of wilful intent on the part of Hamilton.

Yet when the request for review was rejected last Thursday Mercedes issued a furious statement. “In addition to bringing this incident to a close we hope that this decision will mark the end of a concerted attempt by the senior management of Red Bull Racing to tarnish the good name and sporting integrity of Lewis Hamilton, including in the documents for their unsuccessful right of review,” it read.

Such haughtiness overlooks the fact that Hamilton had been “judged predominantly at fault” for the accident, and the review decision did not reduce his culpability in the eyes of the (same) stewards.

True, in the aftermath of the Silverstone crash Horner had reacted (too) emotionally albeit to some understandably so when seen purely from his perspective of a driver undergoing CT scans and a £1.3m bill. But his comments did not deserve the frankly ridiculous comments uttered by Lord Hain, who suggested they fuelled racist attacks on Hamilton on social media. One wonders who put the lord up to it.

This was nothing but cheap politicking on Hain’s part – pre-Brexit Red Bull had hosted Hain’s political party arch-rival Boris Johnson – and Hain’s implication was not only false and uncalled for but overlooked that Red Bull had condemned the racist comments.

The fact Red Bull had terminated its relationship with an employee who made racist comments was seized upon by Hamilton in Hungary as the war of words raged on. Insinuations Red Bull has a race problem are unfair, as perusal of the list of Red Bull’s global athletes competing in all genres demonstrates. Such comments perpetuate and ferment the ill-feeling between the teams and their drivers.

Yes, controversy creates interest and the sport’s television ratings are this year on a steep upward curve, but that is no excuse for some of the comments that have flown in all directions. The fact is that the intensity of the rivalry between the two factions has existed for over a decade now, probably having its roots in Red Bull knocking McLaren-Mercedes off its perch as top British-based team and recruiting Newey from Woking.

The McLaren-Mercedes partnership may be no more but folk have long memories. Current Mercedes president Ola Källenius was on the McLaren board prior to heading up the F1 powertrain company – and Red Bull and the current Mercedes F1 operation compete for the same personnel in the same country, particularly now Red Bull’s engine operation is gearing up just 30 minutes down the road from HPP.

Has the Mercedes-Red Bull rivalry gone too far, is it damaging the sport and should the FIA and F1 put a lid on it? Fans point to the Ayrton Senna-Alain Prost era as one of the most exciting in the history of F1, but that overlooks that the Brazilian is no longer with us. That said, the FIA is under different management now, plus enormous safety strides have been made.

It is up to the two factions to control their emotions, their drivers, their comments, and above all to keep their actions clean and ethical on- and off-track, at all times. When world titles are at stake – and the first possible defeat for Mercedes during the hybrid era – that is no easy ask, but teams are judged not by their actions in victory but by their comments in defeat. Thus far both have been found wanting.

The worst possible outcome would, though, be official intervention, for that would tarnish the season for both main protagonists, and, in turn the most exciting season in at least a decade, if not two.