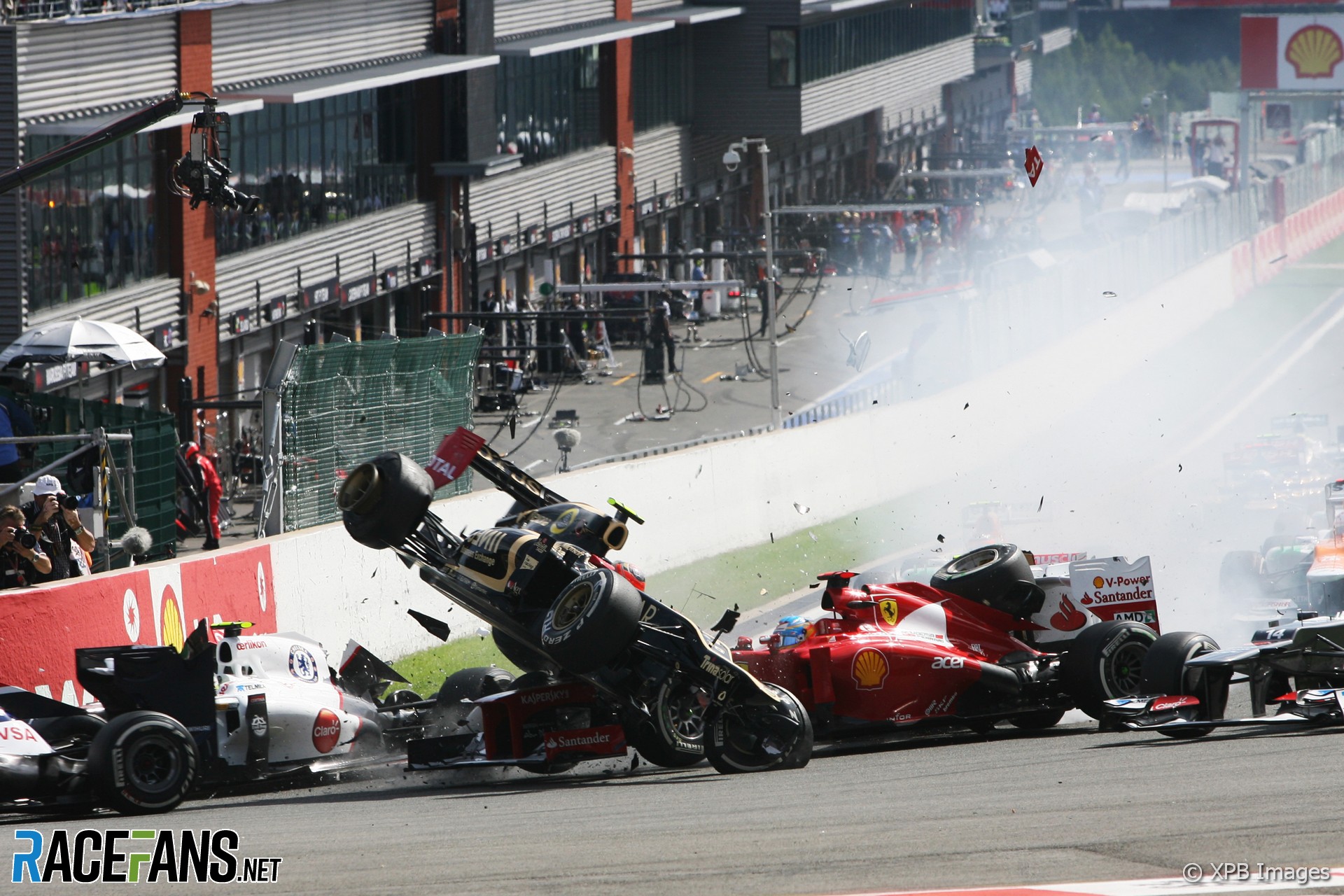 The first-corner pile-up at the start of last weekend’s Hungarian Grand Prix eliminated one-quarter of the field and left two drivers struggling to the finish in damaged cars.

There was no doubt over who was responsible. The stewards made it clear that two drivers were considered “fully to blame”: Valtteri Bottas, who hit Lando Norris and wiped out the two Red Bulls, and Lance Stroll, who launched into Charles Leclerc from a considerable distance, taking Daniel Ricciardo with them.

“Both of those drivers were wholly to blame,” confirmed FIA Formula 1 race director Michael Masi. This was in contrast to, for example, Lewis Hamilton’s collision with Max Verstappen at Silverstone, where the Mercedes driver was “judged predominantly at fault”.

“There was no ‘predominantly’ [to blame] or anything else,” Masi continued. “It was point-blank their mistake.”

This was one of the most destructive crashes Formula 1 has seen for some time. Yet the penalties handed down to the pair seemed somewhat lenient. Bottas and Stroll each copped five-place grid drops for the coming race.

Considering two of the drivers they took out – Leclerc and Sergio Perez – will require power unit replacements as a result of the crash, therefore dooming them to associated penalties later in the year which could force a back-of-the-grid start, the culprits seemed to have got off lightly.

Even more so considering the last time we saw this much carnage the driver responsible, Romain Grosjean, was given an immediate ban for the next race. But there are differences between the incidents which show why they were treated differently, not least that responsibility for last weekend’s crash was shared by two people.

The Lotus driver wiped out three of his rivals on the first lap of the 2012 Belgian Grand Prix. In pre-Halo days, his Lotus passed terrifying close to Fernando Alonso’s head as he flew over the Ferrari. Perez was no luckier that day – his Sauber was taken out in the melee – as was Lewis Hamilton’s McLaren.

Grosjean’s ban was highly unusual. It was the first handed to a driver since Michael Schumacher had to sit out two races in 1994, for ignoring black flags during the British Grand Prix.

The crash which triggered it and Sunday’s pile-up differed in key respects, which goes some way to explaining why they didn’t attract the same responses.

The Spa 2012 crash occured on a dry track and began well before the braking zone for the first corner. Grosjean moved across from his starting position on the left, squeezed Hamilton on the right and made contact with the McLaren. Now out of control, the pair were unable to avoid hitting the cars ahead of them.

In Hungary last weekend rain fell immediately before the start of the race, presenting drivers with significantly different conditions to what they had experienced previously. On a longer run down to a similarly tight first corner, Bottas lost places to several rivals and tucked in behind one of them, Norris. At that point, deprived of downforce and on a slippery track, Bottas lost control of his car and wiped out three others.

Further back Stroll braked far too late for the first corner, took to the grass in the hope of avoiding his rivals, but was unable to avoid Leclerc.

Significantly, race director Michael Masi noted that the change in conditions on Sunday was taken as a mitigating factor by the stewards in deciding the penalties. “Allowing for the rain and so forth, you could say possibly if it was dry conditions and the same incident happened, it may have been a stronger penalty,” he said.

But there is another significant reason why the Grosjean was dealt with more severely. His ban and the €50,000 which accompanied it was in one respect controversial, and not because any doubted his guilt, including the driver and his team who offered no defence for the error.

Besides noting the crash “had the potential to cause injury to others”, which it undoubtedly did, the stewards also pointed out one consequence was that it had “eliminated leading championship contenders from the race”. The implication was Grosjean would have received a softer penalty had he not hit the championship leader (Alonso) and driver 47 points behind him (Hamilton).

No penalty for Bottas or Stroll could ever restore the disadvantage Verstappen suffered on Sunday. In the same way, no sanction for Grosjean could have done the same for Alonso or Hamilton. In between the two crashes this has been recognised: In 2013 the FIA and representatives of teams and drivers agreed the consequences of penalties that are handed down should not be taken into consideration when determining sanctions. This was also a consideration in Hamilton’s penalty for his collision with Verstappen at Silverstone.

Following the Grosjean crash, and partly in response to it, the FIA introduced its penalty points system. While it has many critics, it at least provides a structure through which the threat of a race ban can be used as a disciplinary tool to discourage reckless moves, rather than to arbitrarily punish a driver more severely because they happened to hit a title contender instead of a rival who is, by implication, of less consequence.

Four years ago Nico Hulkenberg caused a comparable crash to Grosjean’s at Spa and the stewards’ response to it further illuminates how their approach has changed since his ban. Hulkenberg was given a 10-place grid penalty and three points on his licence.

“Since 2014 the FIA has introduced the penalty points system which takes into account previous offences by a driver and can lead to a race suspension if 12 points are accumulated within a 12 month period,” the stewards noted at the time. “This system was not in force when an incident not dissimilar to this occurred in 2012.”

It remains to be seen whether a driver could commit a significant enough error to go from no penalty points to an immediate ban. No driver has received more than three points for an individual incident in F1, though Nikita Mazepin collected four for causing a crash in a Formula 2 race in Sochi two years ago.