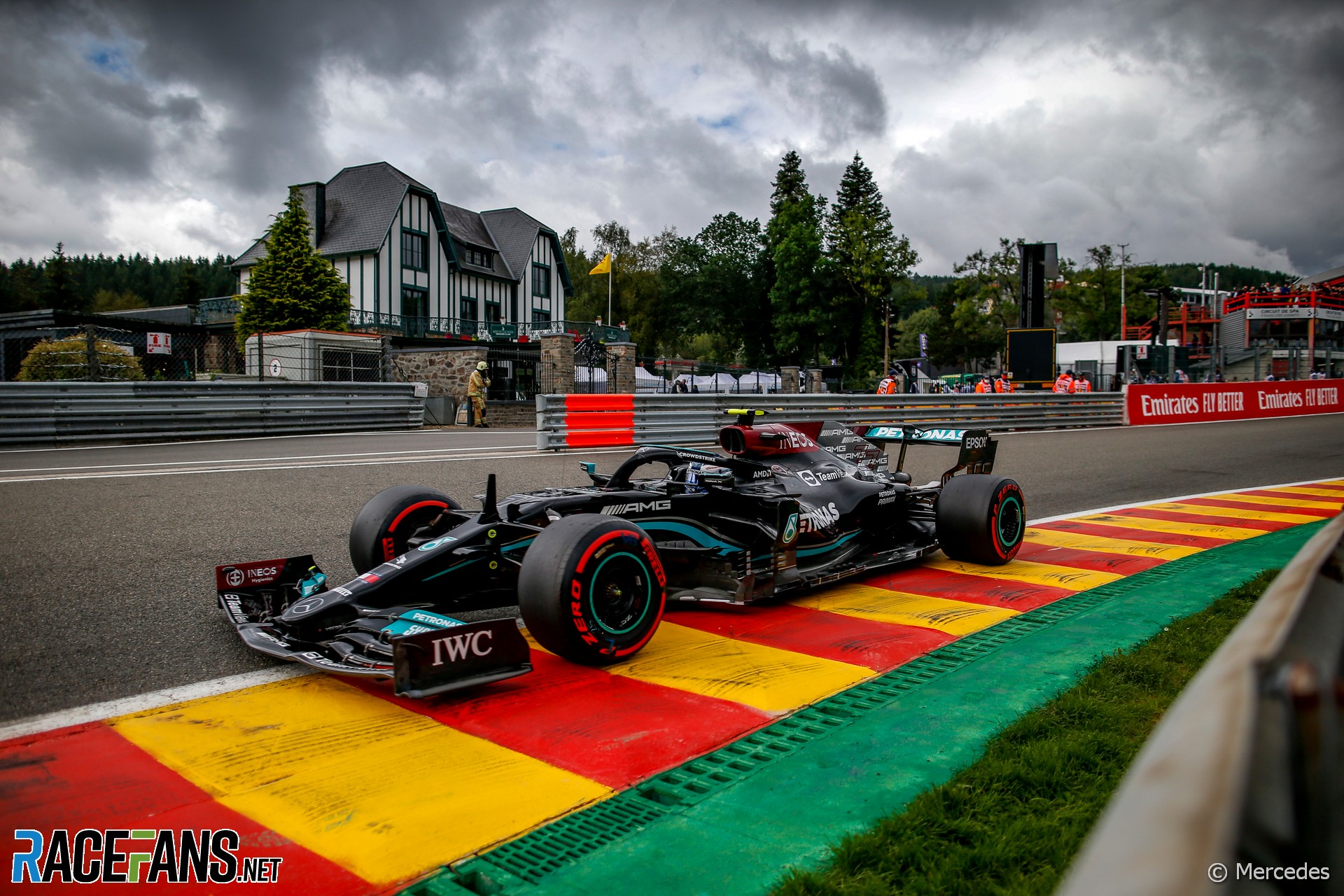 Friday’s practice sessions in a mixture of dry and damp conditions left Max Verstappen on top but the Mercedes drivers breathing down his neck.

With the weather expected to deteriorate as the weekend goes on, teams face difficult decisions on what set-up to commit to for qualifying and the race.

Spa’s combination of a long, winding middle sector which demands good downforce, and fast first and third sectors which call for low drag, always makes for a tricky trade-off between the two. Several teams experimented with different approaches today.

At Mercedes, Valtteri Bottas ran a much slimmer rear wing than Lewis Hamilton during first practice. Bottas has a five-place grid penalty for the Belgian Grand Prix, so has said he is more focussed on race pace than qualifying – nonetheless, he did top the session and was ahead of Hamilton in both first and second practice.

At Red Bull, Verstappen and Sergio Perez also ran different downforce settings, Verstappen opting for a low-downforce setup while Perez experimented with a higher one. Should it prove wet tomorrow, high downforce would be an advantage but if conditions stay dry or even changeable, Verstappen’s set-up could prove advantageous. That was demonstrated in second practice where he was fastest, Perez tenth.

Esteban Ocon was set to do a long run on soft tyres when he damaged the set with a huge spin at Fagnes. Alpine executive director Marcin Budkowski confirmed that Alonso therefore had to run Ocon’s planned programme, as they no longer had tyres available for the Hungarian Grand Prix winner to finish it.

The weather has played a major role in running already, the track not really wet enough for intermediate tyres and not getting fully dry, leaving teams over two seconds off last year’s times. There’s a good chance of more rain (60%) on both Saturday and Sunday, which means running a high downforce set-up would be the safe option. But a lower downforce configuration could be advantageous in the dry, particularly for those needing to make up places in the race. Tomorrow morning’s updated weather forecasts will be scrutinised closely by teams.

Even if it does remain dry, question marks remain over tyre performance. Pirelli’s motorsport director Mario Isola summed up a largely inconclusive day: “With the changing conditions, it was not easy to get very useful data. So I believe that the delta lap time we have measured today was highly overestimated because the track evolution was basically hiding the real potential of the compounds.

“We are in a different situation compared to last year because of the cooler temperature but despite that, I think that the delta coming from the simulations is still a good number. So we estimate between C2 [hard] and C3 [medium] 0.6 [seconds] and between C3 and C4 [soft] 0.5.”

The Alpine cars have looked fast in first and second practice and often do when there’s slightly unstable conditions. In the wind at Portimao and on the drying track in Hungary, Alpine were able to achieve strong results from their car’s seemingly superior stability. But they also have shown tendencies towards being quick on Friday and slipping back as other teams make set-up gains, or extract more from their engines.

In terms of pace, Ferrari have been slightly baffling. Although both cars were inside the top five during the morning session, neither was in the top 10 during the afternoon. They doubted this track would suit them well and it seems to be the case – they may be at risk of not reaching Q3.

McLaren and AlphaTauri’s sheer straight-line speed should serve them well around Spa. Although Lando Norris and Pierre Gasly were the only drivers from the two teams to reach the top ten, Yuki Tsunoda wasn’t far away in 11th. Daniel Ricciardo may yet come good as he has at other tracks which do not place a high demand on braking, and has scope to make up place on Sunday if he qualifies sub-par again.

Aston Martin showed strong pace across both sessions. Although Lance Stroll also has a five-place grid penalty, the Mercedes power unit seems to favour teams at Spa. Nicholas Latifi briefly brought his Williams into the top ten with a strong lap during the morning session.

There then comes the question of whether drivers might opt to take power unit penalties around Spa. Verstappen looks comfortably on the pace but if Perez is somewhat adrift – as he was in second practice – then it might be a good opportunity to take on new power unit elements and the associated grid drop pain, with a race-focussed set-up, and perhaps a touch less wing in the hope the rain doesn’t come on Sunday.