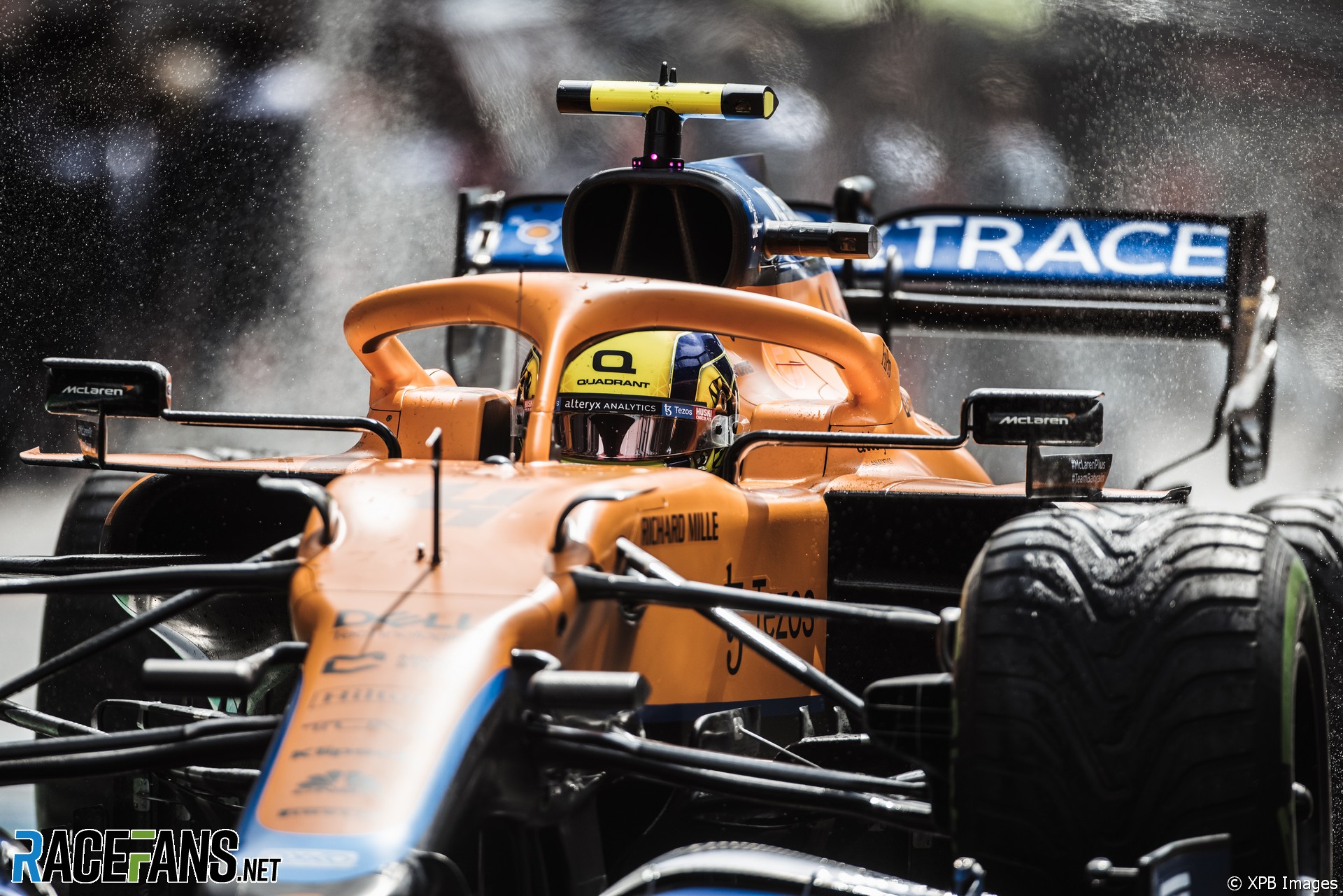 Lando Norris says he is eager to get back in his car for tomorrow’s Belgian Grand Prix despite his huge crash in qualifying at the beginning of Q3.

The McLaren driver was taken to hospital for an X-ray on his left elbow but was subsequently given the all-clear for qualifying. Norris said he followed qualifying while he was on his way to hospital and was cheering Williams driver George Russell in his bid to take pole position.

“I’m very happy for George. I was watching in the ambulance on the way, I wanted to watch quali still. I was cheering on George to go for that pole.”

Norris said he feels fit enough to return to the cockpit tomorrow. “I’ve been better but I’m good just a bit bruised,” he said. “Obviously it was quite a big impact and I think my body’s just been thrown around a little bit.

“I’m good, I’m ready to race for tomorrow. I want to get back on track already because it didn’t end the way I wanted.”

Having set the pace in the first two stages of qualifying, Norris was flying before his shunt at Raidillon.

“Everything was going extremely well,” he said. “Since the first lap in Q1 things were going perfectly and the car was feeling hooked up. I felt confident with the car.”

While the track dried during Q2, heavy rain before the beginning of Q3 made conditions much more difficult.

“I guess it was tricky going out in Q3 because even on the out-lap I was saying how wet it was and saying it should be stopped, or something, because I was aquaplaning quite a bit,” said Norris. “It was just a difficult situation to be in, how much do you want to push, how much not.

“I think it’s a combination of pushing a bit too much for the weather at that point, aquaplaning a little bit in the middle of Eau Rouge which obviously doesn’t end too well and ends up being the way it was in the end.

“I feel bad because things were going very well, the car was on fire, Q1 and Q2 were extremely good and I think I could have quite easily fought for pole position and now I’ve given the team a lot of work to do and probably a very late night. Not a lot I can do now.”

Norris suspects a bump which has developed in the track surface at Eau Rouge since last year’s race may have contributed to his crash.

“There’s a different Tarmac strip at the bottom and it definitely makes it a lot trickier, especially in those conditions when it’s that wet. I think it was one of the first laps where it wasn’t flat-out. It wasn’t like I tried to do it flat-out on my first attempt, I still lifted.

“You get these tramlines from where people go and as soon as you go [out of them], at the speed I was going, a little bit off-line, you just kind of hit all the standing water. And the wet tyres, with how much water was coming down, these bumps as well in the bottom of Raidillon, going through Eau Rouge, was too much for what I had to do.

“In the end of the day it was my mistake, my bad. I didn’t feel like I was taking too many risks at the same time it was just the conditions were so tough and, from what I heard, a lot of other drivers were complaining that it should get stopped at the same time.

“Of course I’m frustrated and annoyed. I’ll try to make up for it tomorrow.”

5 comments on “‘I was cheering on George in the ambulance’: Norris eager to race after crash”