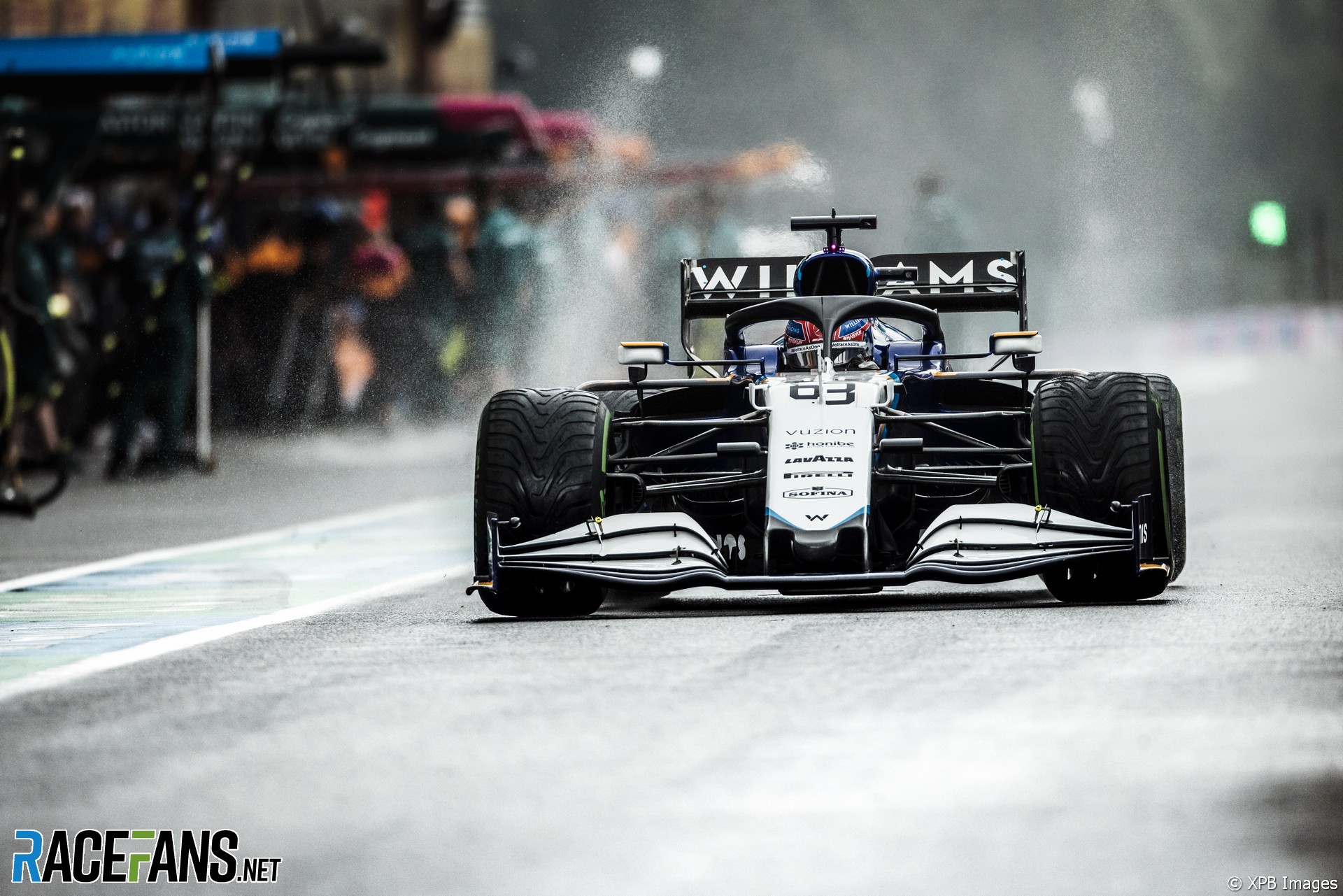 George Russell’s extraordinary qualifying performance, taking his Williams to the front row, involved calculated risks from himself and his team.

Williams were the outliers at the start of Q1, when both cars went out on intermediate tyres while the rest of the field opted for full wets. But their swiftly realised intermediates were not the way to go and pitted, while both Russell and team mate Nicholas Latifi were able to build up their speed over multiple laps and Williams temporarily basked in the glory of having both cars at the top of the times.

Each burned through two of their four sets of intermediates to get through to Q2 – not a major concern for a team which can’t take it for granted both teams will progress beyond Q1. But it meant that when Russell got to Q3 he lacked a fresh set of intermediates to change to. Remarkably, he found enough life in his a used set to record a time which was bested only by Max Verstappen after the chequered flag had fallen.

Mercedes team principal Toto Wolff called Williams’ strategy “risky but clever”. But how did the team and Russell find the perfect moment to pull off one of F1’s most heroic recent qualifying runs?

Russell’s technique clearly impressed Wolff, notably his line through the hairpin at the start of the lap. “I looked at the onboards of all the drivers and straight from the beginning, he’s the only one who gets… he just gained so much through La Source, so much time to everybody else because he’s the only one who is on the apex.”

In ordinary conditions a good exit from La Source is vital as it precedes the flat-out run through Eau Rouge and Raidillon to Les Combes. However in the streaming wet conditions of Q3, Russell and his rivals couldn’t attack the most daunting corner sequence in F1 without lifting. Nonetheless, he carried enough speed through there to set a first sector time Verstappen couldn’t match.

From there on the rest of Russell’s lap was extremely tidy. “He just made the absolute most in every corner” enthused Williams’ head of vehicle performance Dave Robson. Driving perfectly in the wet is no mean feat but to be beating teams much faster than Williams, who scored their first points for more than two calendar years at the Hungarian Grand Prix, takes more than just extracting the most from the second-slowest car through corners.

As Williams’ supply of intermediate rubber was depleted by the time Q3 began, Russell began the top 10 shoot-out on the full wet weather tyres. “We left on that full wet but knowing that we had plenty of time to make the pit stop,” Robson explained.

“Once we’d made the pit stop, George was obviously very happy that it was inter conditions. So we made the stop and then we felt we could either do two pushing laps or, with the track drying quite quickly, we could just go all in the name for that one good lap at the end. So we went for that.” The latter option naturally increased the pressure on Russell, who had a single lap to apply everything he’d learned about his car’s performance in the conditions.

The outcome astonished his team, who didn’t believe anything like a front row start was possible. “We just said we have nothing to lose,” Williams CEO and team principal Jost Capito. “Coming into Q3 for us is a fantastic achievement and then we can’t lose, we just can win.

“So we say, okay, we still put our heads down and think what is the right strategy and go for it. We would have never believed being P2, of course not. Maybe P8, maybe P7 – if it all went very well. But I think the strategy worked out fantastically.”

That freedom to take a more relaxed approach to their Q3, Robson said, meant they could be thorough with procedures to set up Russell’s one good lap. “We took the opportunity to do to get the tyres, the brakes, the power unit all in the right state and then just go for it. Fortunately today, it all worked out very well. He obviously had a really good track position, so it all just came together nicely.”

Russell’s use of his car’s hybrid system was particularly skilful. He had set provisional pole with what turned out to be his warm-up lap, which was predictably beaten as other cars got up to speed. But as he explained he was only playing himself in cautiously at this stage. Few might have predicted he would slice 7.7 seconds off his time, leaving himself just three-tenth away from pole.

He described how he saved the energy in his car’s battery for that final run. “It’s really difficult on this long circuit because we’ve obviously got the same engine mode but the battery deployment is quite different and you want to give it everything you’ve got on that one lap.

“I knew the [qualifying] lap would be on the last lap, so I basically pushed but I didn’t deploy my battery, and just saved it all for the last lap, because it’s quite potent around here – so that’s the reason for that.”

Although Russell had to run a used set of tyres, Robson said the team were confident about their condition. “We did know that that first set of inters from Q1, we’d used when it was really quite wet, so they weren’t badly damaged when we pitted off them,” he explained.

“Then there had been such a long period of time since Q1, run one they were all hopped back up to temperature. So we were reasonably confident that they would be in good shape.”

Robson said the changeable conditions at the restart of Q3, when drivers first went out on full wet tyres, had helped them. “We were fortunate that the heavy rain meant we could do a bit of work on the full wet and just that bit of extra time to get the tyres back up to temperature were the key so there was an element of fortune in there.”

“We think we were the only one who put it in one lap and went for this, because I think we knew something maybe the others didn’t.”

For Williams, finding those advantages is their only way to out-think rivals they can’t necessarily compete with on pure pace, said Capito. “In our situation we have to do strategies that are different to anybody else. If we do the same as the other teams do with the faster cars, we can never beat anybody. So we have to take some risk. But we know why we take the risk and what risk we take.”

While Williams’ strategy paid dividends, it remained down to Russell to deliver the lap, which he did in remarkable style – and not for the first time. Russell has repeatedly exceeded expectations at Williams, especially on a Saturday but never to this level.

Wolff has been weighing whether to promote Russell to a place at the team alongside Lewis Hamilton next year. The decision has already been taken, Wolff said yesterday, so Russell beating his possible future team mate to second on the grid by 13 thousandths of a second won’t have a bearing.

Nonetheless, Wolff was clearly deeply impressed by what he saw. “He was very committed through Eau Rouge and the car looks also very good through the rest of the lap. It needs a driver to actually maximise that or exploit the full potential of the package or over-perform the package, and I think all that came together and we saw a brilliant lap from a brilliant young driver.”

An emotional Robson, who had witnessed Williams take its first front row slot since 2017, at a track where they were five seconds off the pace two years ago, said “it’s hard to keep finding words to describe” Russell’s achievements in qualifying.

“When he really has a good qualifying session, he really does get better and better as the session goes on and that’s what we saw today.