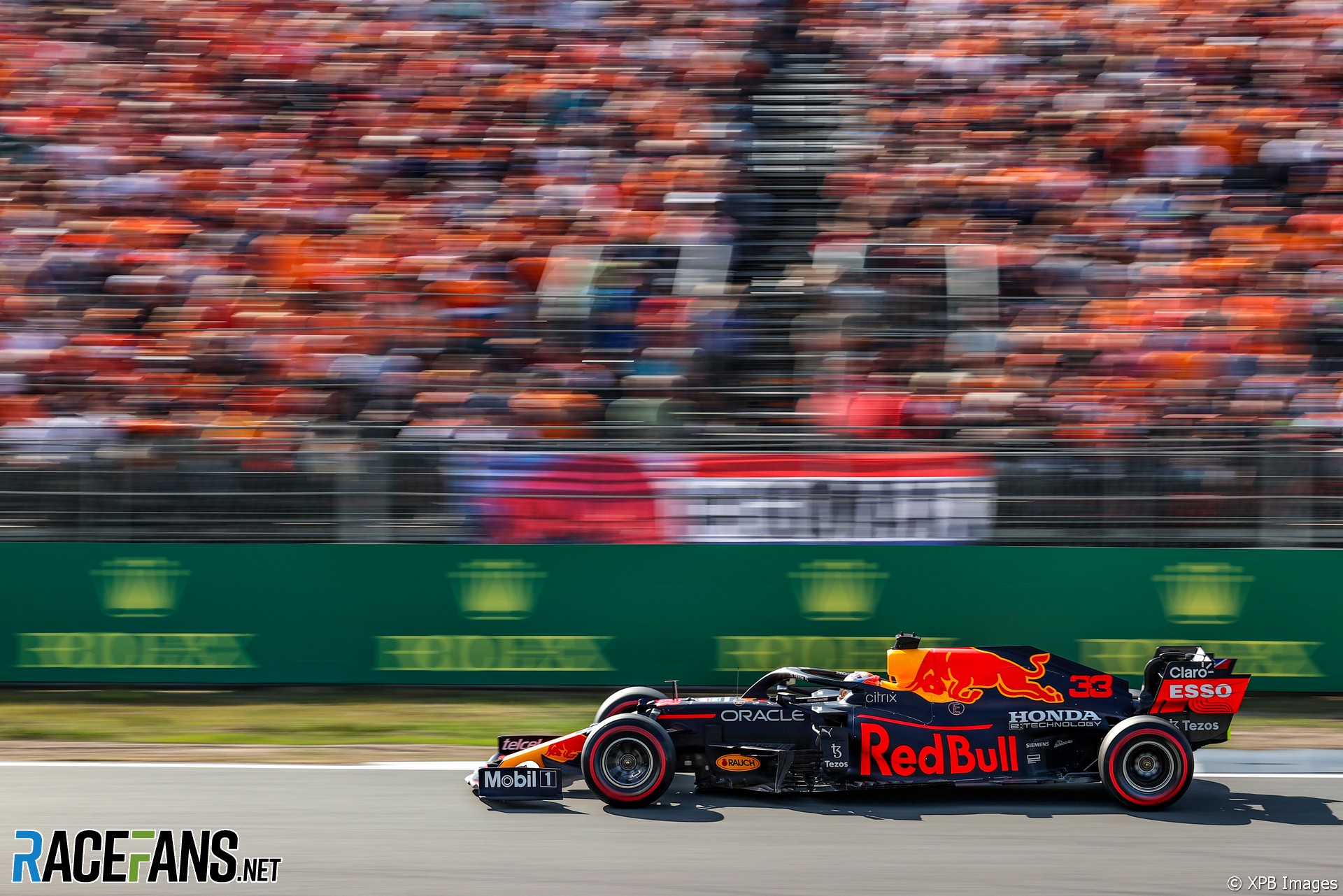 Max Verstappen took pole position for the Dutch Grand Prix to the delight of the crowd at Zandvoort, but only by half a tenth from rival Lewis Hamilton.

An apparent DRS issue for Verstappen out of the final corner was not enough for Hamilton to overcome Verstappen’s time of a 1’08.885, seeing him take the first pole position at Zandvoort since Nelson Piquet in 1985.

Valtteri Bottas took third on the grid, while Pierre Gasly will start fourth in the AlphaTauri after beating both Ferraris.

What was expected to be a very hectic opening session for the first qualifying for a Dutch Grand Prix in almost 40 years saw the local Max Verstappen faithful delighted to see the Red Bull driver set the early benchmark ahead of championship leader Lewis Hamilton.

The Mercedes pair successfully secured passage through to the second session on the yellow-walled medium tyres – the only team to attempt to get through to Q2 without using a set of softs.

After crashing his Ferrari at Hugenholtz in third practice, Carlos Sainz Jnr was relieved to be released from the garage with plenty of time available to salvage his weekend from being heavily compromised. Robert Kubica, having been parachuted into Kimi Raikkonen’s Alfa Romeo at short notice, was able to get himself temporarily out of the dropzone after using a second set of soft tyres, before falling back down the field as times began to get quicker.

With the track evolution proving dramatic and every passing minute offering better lap times, drivers began to make major improvements in the final moments. Both Ferraris moved the top of the times with Charles Leclerc ahead of Sainz, while Antonio Giovinazzi and Nicholas Latifi both getting into the top ten.

Sebastian Vettel arrived to the final corner to find a bunch of cars waiting to start their laps and had to slam on the brakes to avoid the Haas pair Nikita Mazepin and Mick Schumacher, ruining his lap and seeing him eliminated in 17th.

The stewards announced that both Mazepin and Schumacher would be investigated after qualifying. Mazepin complained on the radio that Schumacher had overtaken him immediately after the pair left the pits, and appeared to be trying to pass his team mate at turn 13 when Vettel caught him.

Sergio Perez was caught up in the traffic and failed to cross the line to start a final attempt before the chequered flag was flown. He could only watch as first Esteban Ocon, then Lando Norris improved to see the Red Bull driver fall into 16th and eliminated from the session.

Vettel was the next driver out in 17th, with Kubica out in 18th ahead of the two Haas cars on the back row on the grid, with Schumacher ahead of Mazepin.

As the second session began, Red Bull and Max Verstappen wasted no time in taking advantage of the relatively quiet track to head out for an early banker lap. Verstappen’s 1’09.071 was over a second faster than his best time in Q1 and left him over six tenths quicker than both Mercedes of Lewis Hamilton and Valtteri Bottas after their first attempts on the soft tyre.

Pierre Gasly continued to impress in the AlphaTauri, jumping up to third fastest ahead of the Mercedes pair and behind Leclerc’s Ferrari. But Gasly’s team mate, Yuki Tsunoda, was far off his team mate’s pace – sitting at the rear of the field after his initial run.

George Russell tried to improve on his 11th place position after his first run and get himself into the top ten, but pushed too hard into the penultimate corner and spun backwards into the gravel, hitting the tyre barriers with the rear of his Williams. The red flag was immediately flown, but Russell was able to drive the car out of the gravel and around the banked final corner before recovering into the pit lane.

Despite returning to the garage, Russell was unable to rejoin the track when the session eventually resumed with just under four minutes remaining. To try toavoid traffic, drivers took turns in sitting at the exit of the pit lane before joining the circuit for their out-laps.

With the risk of track evolution meaning no position was safe, Red Bull and Mercedes both opted to send their cars back out in the dying minutes for a final lap. However, they would never get the chance to begin them, as the session was stopped for a second time when Russell’s Williams team mate Nicholas Latifi spun on the way into the fast right-hand kink of turn eight while passing Hamilton’s Mercedes, crashing heavily into the barriers.

Latifi was unhurt and able to climb out of his car, but with only one minute and 38 seconds left on the clock, race control decided that the session would not be restarted. That meant that Lando Norris was a surprise victim of Q2, eliminated in 13th place. Russell was credited with 11th despite his earlier accident, with Lance Stroll out in 12th place.

The wrecked Williams of Latifi was out in 14th place, with Yuki Tsunoda the last driver knocked out down in 15th position.

There was an extended delay to the start of the final shootout for pole position as the barriers at turn eight were repaired following Latifi’s crash at the end of Q2. By the time that Q3 eventually got underway, all ten cars filed out of the pit lane in order, leaving enough space for each other to make their fast laps unimpeded.

Verstappen immediately lit up the timing screens and recorded a 1’08.923 to go quickest of all after the first run. Bottas was almost three tenths slower than the Red Bull, with Hamilton half a tenth further behind his Mercedes team mate in third.

Gasly’s first effort of Q3 was good enough for fourth, ahead of the two Ferraris of Charles Leclerc and Carlos Sainz, with Fernando Alonso sitting in seventh place ahead of Giovinazzi, Daniel Ricciardo and Esteban Ocon.

The track fell silent until just over three minutes remaining, when the ten cars took the the track once again. Verstappen went out ahead of the two Mercedes of Bottas and Hamilton, who sat at the rear of the train of cars.

Verstappen set a fastest middle sector and crossed the finish line to improve on his own provisional pole time by three hundredths of a second. Bottas was unable to improve, leaving Hamilton the only man with a chance to deny the home fans a Dutch pole sitter. Despite a stunning final sector, Hamilton could not beat Verstappen’s best effort by just under four hundredths of a second, ensuring that Verstappen would be the first Dutch driver to take pole position for the Dutch Grand Prix.

Hamilton demoted Bottas to third, while Gasly improved to secure a second row start for AlphaTauri. The Ferraris of Leclerc and Sainz will occupy the third row, ahead of Giovinazzi in seventh, Ocon in eighth, Alonso in ninth and Ricciardo rounding out the top ten.