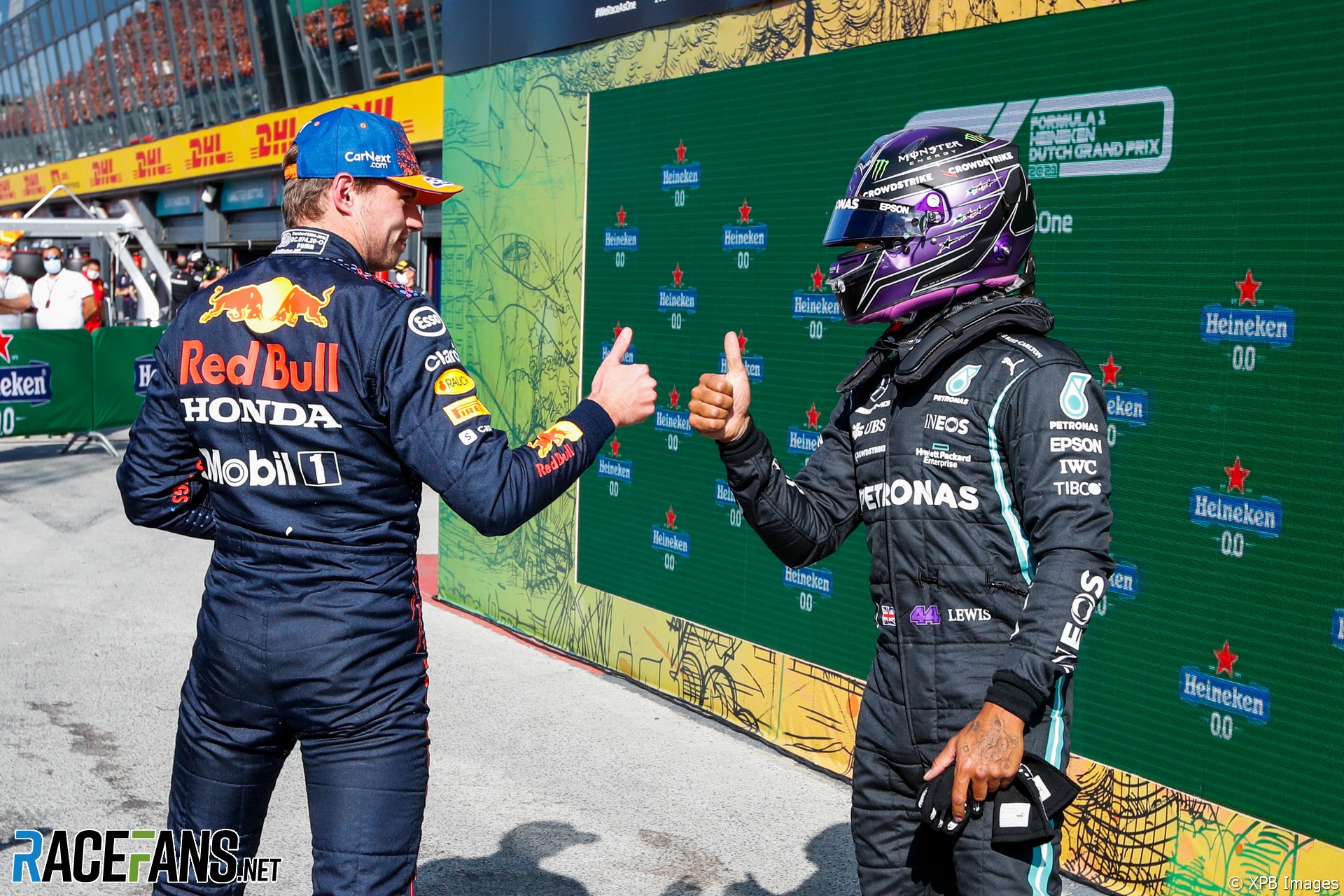 Max Verstappen has completed the essential first step towards capturing his first home win by taking pole position for the Dutch Grand Prix.

But it was a mixed result for Red Bull in qualifying, as Sergio Perez failed to progress beyond Q1. That will undoubtedly make it harder for Verstappen to se off the threat of the two Mercedes starting behind him.

The cramped pit lane the risk of interruptions to the race could make Verstappen’s job less straightforward.

The difficulty of overtaking should count in his favour, however. Zandvoort’s revamped circuit has been praised by drivers as fun and challenging but is unlikely to see much overtaking on Sunday.

Verstappen took a rightly celebrated home grand prix pole but he starts with one Mercedes alongside him and the other directly behind. Lewis Hamilton has a clear run down the inside for the run to Tarzan while Valtteri Bottas is well positioned to take the outside line if an opportunity appears there.

Despite the sand blown regularly across the track from the nearby beaches, the support races gave little indication of any particular disadvantage to starting on the ‘dirty’ side of the grid at the front. Those lining up fourth haven’t done that well – Pierre Gasly take note, the AlphaTauri driver having matched his best starting position of the season so far.

Having failed to get out of Q1 Perez is likely to switch to a fresh engine, taking the opportunity to serve an inevitable grid penalty on a day when it should only cost him four places. But that will leave his team mate on his own at the front.

That’s often been the case for Verstappen this year and doesn’t necessarily mean he’ll be a sitting duck, Mercedes seeming to lose more times than they win in straight strategy battles with Red Bull this season. But it does present an opportunity for Hamilton or even Bottas to steal Verstappen’s home win, especially given pit stops are likely to be a major position decider.

Where Mercedes do have a clear disadvantage is that both Hamilton and Bottas will start on tyres that are more worn than Verstappen’s. The later red flag interruptions to Q2 prevented them trying to beat the times they set on four-lap-old soft tyres for fresher rubber.

That might not matter too much, given every car in the top 10 will start on soft tyres, but Mercedes will be hoping for something to mix up the strategy to offer a means of disrupting Red Bull’s afternoon. A Safety Car is the most obvious possibility, and may come to the aid of Mercedes if they can’t stretch out their first stint too long on their worn rubber.

The upside for Mercedes against comes from Perez’s absence from the sharp end. If they can’t pass Verstappen at the start, perhaps they can stalk him long enough to split the strategies between their drivers and attack that way. But even this is a big ‘if’ given the long-run pace Verstappen had on Friday.

Should the Safety Car appear and drivers pit en masse they may encounter another problem. The Zandvoort pit lane is extremely tight and, as a result, the speed limit has been set at the lower limit of 60kph compared to the usual 80 for road courses. “It’s very cramped,” Aston Martin CEO Otmar Szafnauer said.

“I think in a race situation, if it’s just one car at a time, it’s definitely do-able, we just have to be cautious. But stacking them, if for whatever reason we need to stack that will be a bit more tricky.”

After the Belgian Grand Prix demonstrated what an F1 parade race would look like, hopefully Zandvoort won’t be quite that processional. However, drivers have become convinced throughout the weekend that there’s very little chance of overtaking.

The two places that support race drivers have done most overtaking have been the final corner and through turn three. A few brave moves into Tarzan aside, the DRS drag down the main straight hasn’t proven all that effective for F3 – in fact W Series, without DRS, seemed to be able to make better use of it. However, both junior championships use spec cars, where no one team has a huge advantage over another.

Lando Norris, who failed to reach Q3 for the first time this season, was doubtful about his prospects of moving forward. “Zandvoort is not the place you want to be anywhere other than the front of the grid, really. So it’s going to be tricky. But it’s tricky for everyone.

“It’s also at the same time opportunities for us to try and gain a couple of positions and we can try and get into the points as well, that’s the aim. But I think everyone knows it’s not going to be an easy place because of the difficulty to overtake and follow around the circuit. But on the other hand, we have the yellow flags and the crashes and the red flags and yes, that can also play into our hands.”

Red flags have been the most disruptive during all the pre-race sessions at Zandvoort. By the end of qualifying, there had been six during F1’s track time alone and no full session had gone without stoppage.

However as F3 and W Series have shown the Safety Car is more likely to appear in the race for the kind of crashes which stopped qualifying today.

Blue flags will also be a frequent sight around the 4.2-kilometre circuit. Leaders are likely to lap the tail of the field quickly and then struggle to find space to regain positions.

Fernando Alonso was pessimistic that cars would be able to make good manoeuvres, at least early in the race. Qualifying “was fun because the low-fuel car feels very fast here and it was enjoyable to drive,” he said.

“But I think tomorrow is going to be maybe different with the heavy cars [that are] not easy to overtake. Maybe it’s a little bit more a boring race. But let’s see.”

Share your views on the Dutch Grand Prix in the comments.

21 comments on “Verstappen fighting alone again against Hamilton at home”