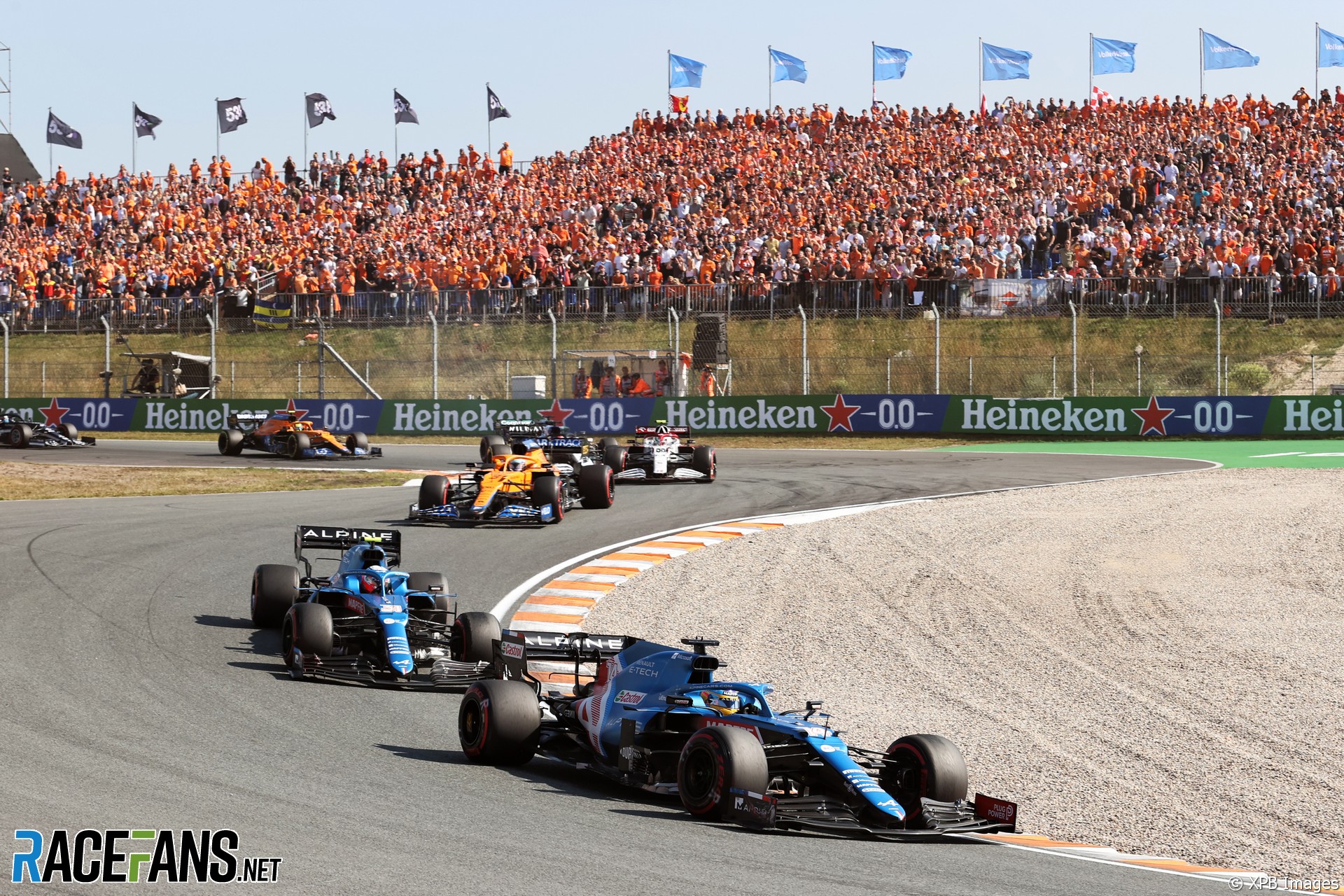 Fernando Alonso said he was “lucky” to avoid crashing out of the Dutch Grand Prix when he lost control of his car at turn three late in the race.

The Alpine driver also described a hectic first lap in which he had contact with three different drivers, including his team mate Esteban Ocon.

Alonso lined up ninth at the start but ended the first lap in seventh place, gaining positions from Ocon and Antonio Giovinazzi.

“But Giovinazzi thought the same plan, I guess, so he was on the outside and blocking a little bit my idea. So after that, I had to improvise a little bit into turn two and turn three. There were a lot of cars, I was even in the grass at one point.”

Alonso picked up places around the outside of the steeply banked turn three, but had to back off when he caught Carlos Sainz Jnr’s Ferrari.

“In turn three I chose to run on the outside and I kept a good momentum on it,” he said. “But Carlos was in the middle in a way, so I had to brake the exit of three. It didn’t help.

“But then Giovinazzi and Carlos were fighting until up until seven. And I could squeeze one position there.”

During that time Alonso believes he had contact with three different drivers. “I think I’d been hit by Esteban in turn one, by [George] Russell in turn two, and by Giovinazzi in turn six. So I have a very robust tyre today and no puncture, so that was good.”

Alonso passed Carlos Sainz Jnr for sixth place on the final lap. However he had a scare when he almost crashed at turn three trying to complete the pass.

“It was a very stressful moment, for sure,” he said. “I had a go into Carlos like six laps to the end into turn one on the inside.

“I thought I was making the move and in the last moment, he released the brakes and he braked even later. So we nearly touched already into turn one.

“Then into turn three, I was too close. I locked the fronts a little bit and I run wider than normal outside the circuit. But obviously there are like two metres from the banking to the wall.

“I was like 10 centimetres or something from the wall with both front tyres locked up. So it’s not that I did anything magic there, it was just pure luck because I was not in control of the car. So I got lucky there.”