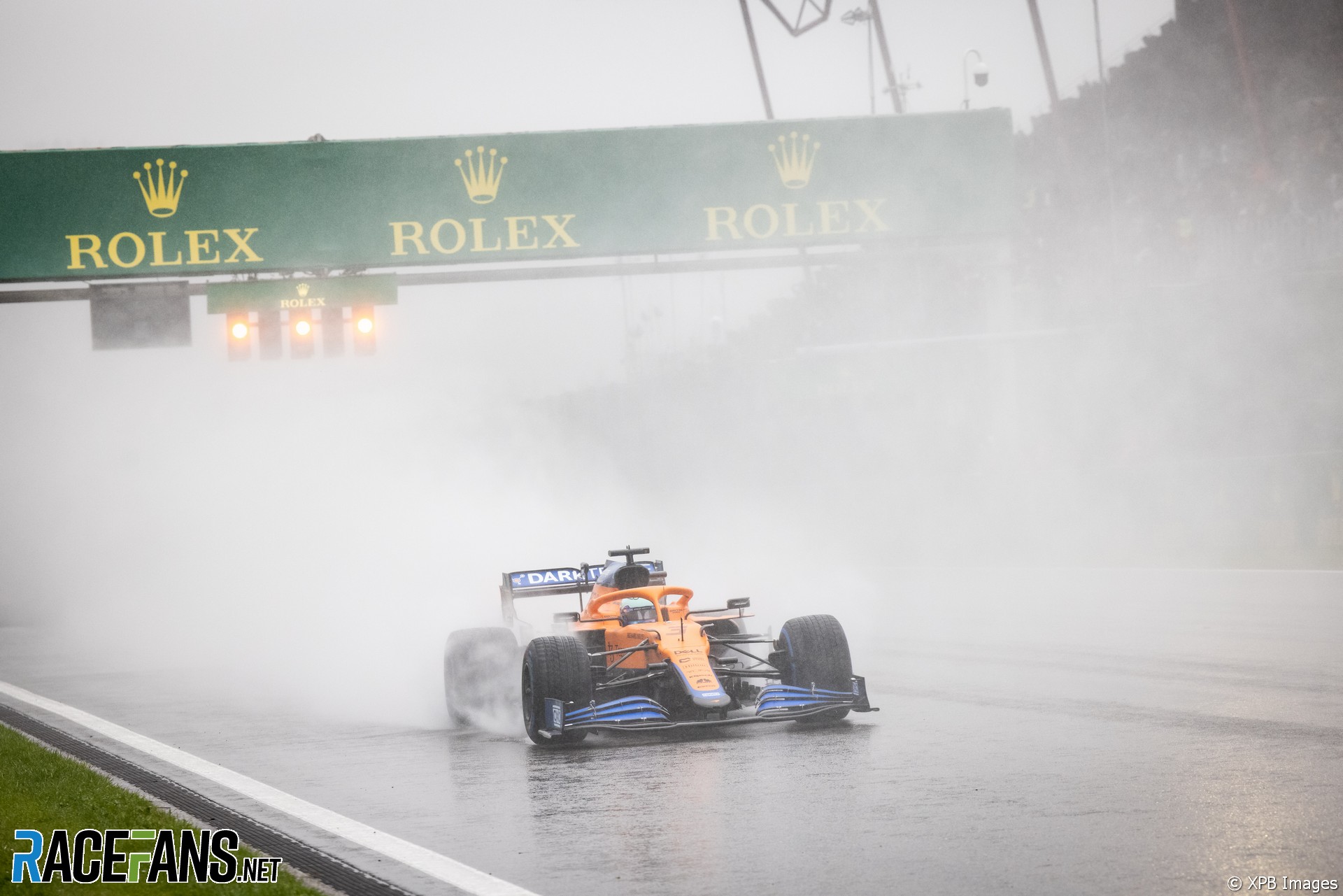 Pirelli’s head of F1 and car racing, Mario Isola, says there is little the tyre manufacturer can do to reduce the visibility problems drivers have reported in severely wet conditions as they develop their range of tyres for the 2022 season.

With Formula 1 adopting 18-inch wheels for the new generation of technical regulations coming next season, Isola said Pirelli are unlikely to change their approach to their two wet tyre types.

In the aftermath of the Belgian Grand Prix – which was abandoned after only three official laps were completed in heavy rain under the Safety Car – Isola believes there is scope for Pirelli to help avoid similar situations from occurring in the future.

“The question clearly is about what happened in Spa and the reason for not running because of the visibility,” Isola says. “On the tyre side, I believe that there is very little we can do to avoid the spray in the air.

“We can design a different tyre, able to disperse less water, but then the problem becomes safety because clearly it’s a tyre that is not able to manage aquaplaning as the current tyre is doing.

“There are probably other solutions considering different tarmac, considering an inclination of the track to remove standing water, or other solutions to the car. But on tyre side, if we want to disperse this amount of water, it’s impossible not to have the spray in the air. And if you have spray in the air, the visibility becomes worse and worse.”

Isola resisted suggestions of introducing a universal and more extreme type of wet tyre for use in all conditions with standing water on the track, similar to the ‘monsoon’ tyre developed by previous F1 tyre constructors. He stressed the importance of having a crossover threshold of performance between the intermediate and the full wet tyres.

“I believe that at the moment for Formula 1 we have a wet tyre that is designed for full wet conditions and the intermediate tyre that is obviously more for drying conditions,” Isola said. “They are working well. There is a crossover. There is an area where the two different tyres can work as well.

“It’s important to keep this overlay between the two tyres. But moving to a single wet tyre? I’m not sure that is the right choice now.”

Isola confirmed the tread patterns for next year’s tyres will remain almost identical to their current form, which was last revised in 2015.

“Around 2015 we made some changes to make the tyre better – I’m talking about the full wet – better with aquaplaning,” he said when asked by RaceFans.

“Now we are also designing a new tread pattern for the 18-inch tyres, we’re testing a different solution, [but] I believe that the tread pattern for next year will be very similar to the current one. Because, as I said, we want to keep this crossover and we don’t want to take the risk that we move too much on one side or the other. The tread pattern is working well, so there is no reason to change.”

Pirelli does not have the opportunity to experiment with different constructions and tread patterns on their wet tyres due to the limited testing opportunities available to them, said Isola.

“We are, in any case, estimating the different dimensions of the block, different grooves, different design. But the current one is working well, so we have to pay attention not to change it too much.