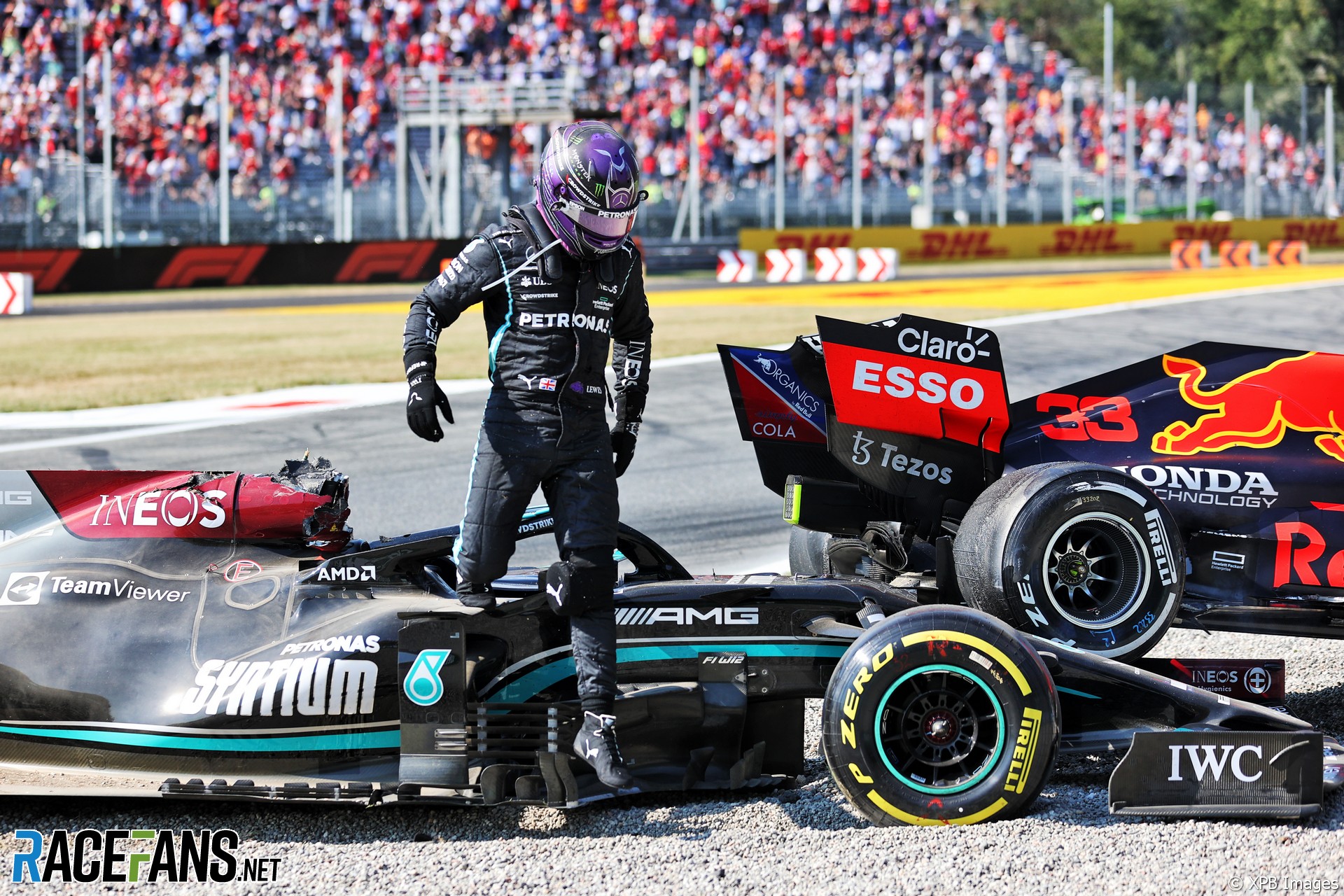 The pair collided at the Rettifilo on lap 26 of the race. Hamilton had just emerged from the pits ahead of Verstappen, who attempted to drive around the outside of him at turn one and pass at the inside of turn two.

Verstappen touched a high ‘sausage kerb’ on the inside of the corner, rode onto Hamilton’s car, and the pair came to a stop in a gravel trap. Hamilton said he was “a little bit stiff and sore in my neck, it landed on my head, but I’ll be okay.”

Hamilton came out of the pits between Daniel Ricciardo and Verstappen. “I came out, I saw Daniel came past, Max was coming, I made sure I left a car’s width on the outside for him.

“I went into turn one and I was ahead, I was ahead going into turn two and then all of a sudden he was on top of me.”

On the first lap of the race Hamilton had been forced across the run-off area at the Roggia chicane while trying to pass Verstappen in a similar fashion. He said the two incidents were comparable, and showed Verstappen should have backed out in the later incident.

“It’s exactly the same scenario as happened in turn four where I went around the outside, I was in exactly the same position but I gave way,” said Hamilton. “And that’s racing. He just didn’t want to give way today.

“He knew into turn two what was going to happen. He knew that he was going over the kerb but he still did it.”

Verstappen rejected the comparison between the two incidents. “I don’t think you can judge them exactly the same. He just kept on squeezing and squeezing while I was really a lot alongside him.

“You need two people to work together to make the corner and we are fighting for position. Unfortunately we touched.”

Verstappen denied there was any lingering animosity on his part following the collision between the pair at Silverstone in July, which led him to crash out heavily.

“Of course people automatically start talking about Silverstone. These things happen, of course it was not nice at the time. I think we are all professional enough to just get on with it and keep on racing each other.

“But then he just kept on pushing me wider and wider and at one point there was no way to go, he just pushed me onto the sausage kerb and that’s why, at the end of the day, we touched because of the rear tyre bumped up to his tyre.”

The stewards are investigating the incident and have summoned the pair to explain their roles in the collision.