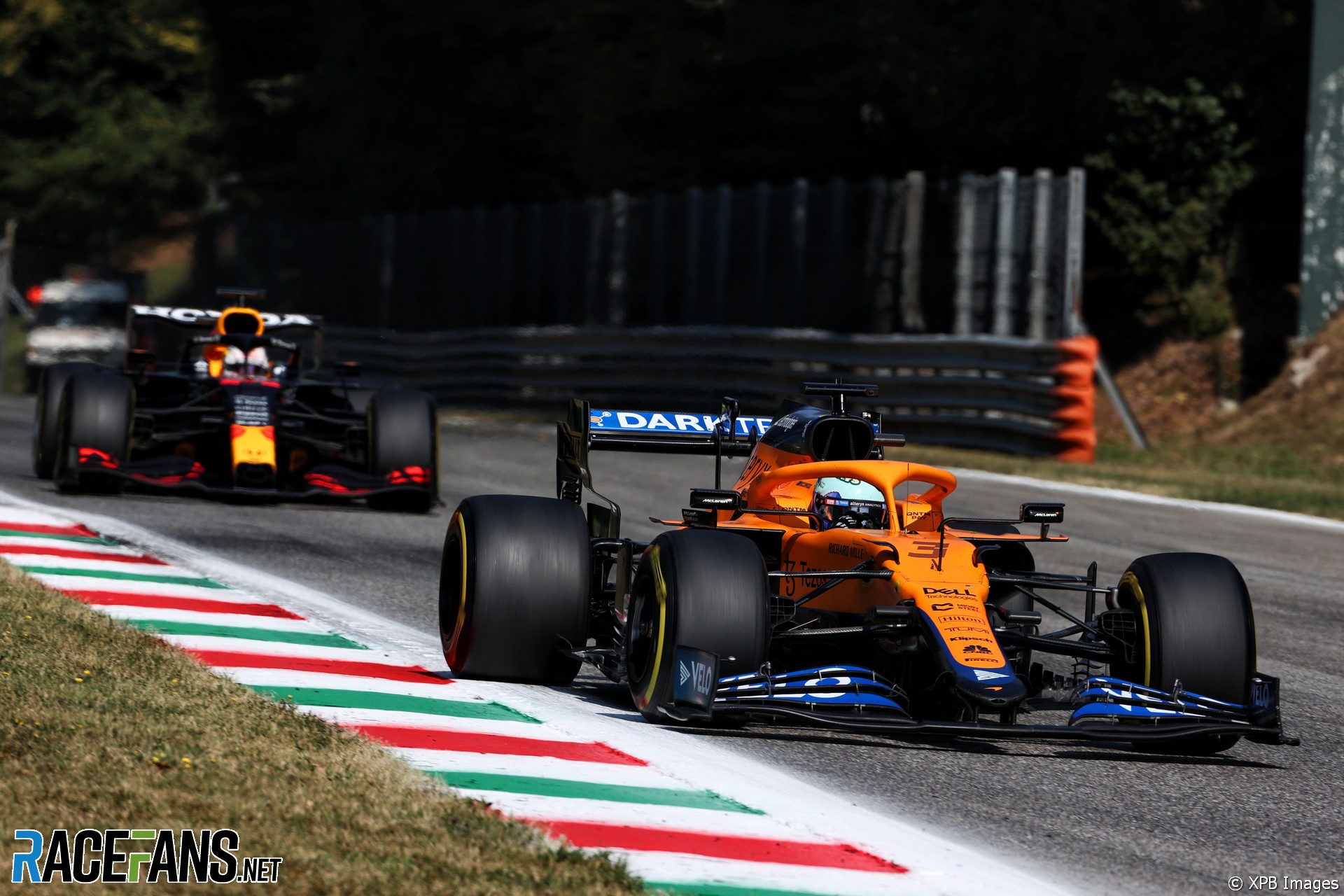 Daniel Ricciardo gave McLaren their first win since 2012 at the Italian Grand Prix after Max Verstappen and Lewis Hamilton crashed into each other at Monza.

Bottas took third on the podium after Perez was demoted by a five second time penalty. Verstappen and Hamilton are under investigation after crashing out midway through the race at the Rettifilo chicane.

Before the cars had pulled away for the formation lap, Yuki Tsunoda was pushed into the pit lane with an apparent issue on his AlphaTauri. He would not take the start of the race.

When the lights went out, Ricciardo got a much better getaway than polesitter Verstappen and leapt out into the lead before the field had reached the breaking zone of the Rettifilo.

Verstappen came under pressure then from Hamilton, with the pair making minor contact as they drive through the Roggia, with Hamilton taking to the escape road and allowing Norris to move up to third.

Antonio Giovinazzi was spun around after contact with Carlos Sainz Jnr exiting the Roggia, prompting a short Virtual Safety Car as Giovinazzi limped back to the pits for a new front wing.

The race quickly resumed, with Verstappen looking to hunt down the leader. But despite sitting within DRS range of the McLaren out front, Verstappen was unable to get close enough to attempt a move for the lead.

Ricciardo kept the lead until the end of lap 22, when McLaren brought in the race leader for a set of hard tyres. Verstappen was in the very next lap as Ricciardo went four tenths faster in the middle sector alone. But a lengthy delay to his right-front wheel saw him lose any hope of taking the lead and be passed by Norris.

Hamilton eventually pitted to move onto the medium tyres a few laps later and rejoined the circuit right in front of his championship rival. As the pair rounded the tight Rettifilo side-by-side, they collided, with Verstappen bouncing on top of the Mercedes.

Both rivals were out of the race on the spot and the safety car was deployed. As Verstappen and Hamilton climbed out of their crashed cars thankfully unhurt, those who had not yet pitted immediately came in to switch to new tyres. This saw Ricciardo in the lead from Leclerc, Norris, Perez, Sainz and Bottas.

When the race resumed, Norris stormed through into second by charging up the inside of Curva Grande. Perez and Bottas both made their way past Leclerc in the later laps, demoting the Ferrari to fifth.

With a McLaren one-two out front, McLaren gave Norris the instruction to hold position in second. Perez was given a five-second penalty for leaving the track and gaining an advantage and held off the advances of Bottas as the Mercedes looked to pass him on track.

Despite the top six cars covered by seven seconds, Ricciardo and McLaren were able to soak up the pressure from the pack behind. Ricciardo held on to take the chequered flag, end McLaren’s almost nine-year wait for a victory and score his first win since the 2018 Monaco Grand Prix.

Norris crossed second to secure a one-two for McLaren, with Bottas taking third after Perez’s penalty was applied. Perez fell to fifth after the penalty, behind Leclerc and ahead of Sainz.

Lance Stroll finished seventh, ahead of Fernando Alonso, George Russell and Esteban Ocon rounding out the points in tenth.