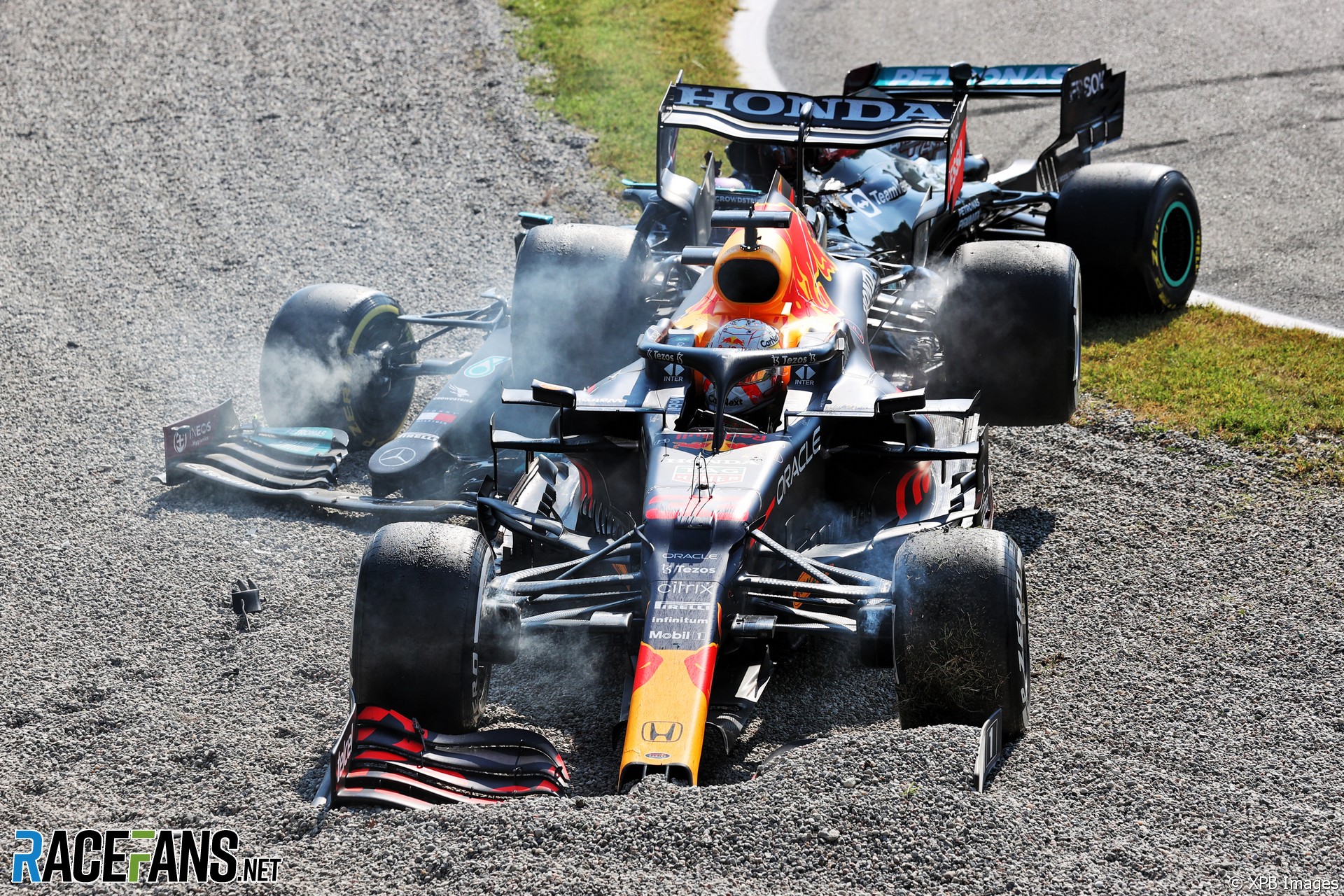 The second collision between Lewis Hamilton and Max Verstappen demonstrated Formula 1 is experiencing its most fiercely contested championship fight in a generation.

The pair had already crossed swords on-track several times before their first collision at the British Grand Prix in July. At Monza, the first time the two title contenders had fought wheel-to-wheel since then, they tangled again.

The two previously raced each other cleanly – just about – in Bahrain, Imola, Algarve, Catalunya and Paul Ricard. But there were near-misses at the start in Imola and Catalunya, where Hamilton took avoiding action to ensure Verstappen’s uncompromising moves didn’t result in contact.

Lately Hamilton has been less willing to back down, most notably at Silverstone. It’s fairly obvious why – Red Bull has had a fractionally quicker car on balance over the season so far and Hamilton can’t afford to let points-scoring opportunities slip.

In previous skirmishes between the two Hamilton had too little to gain to force the issue. Now whenever the two meet on track it’s a matter of irresistible force meets immovable object.

That’s all well and good as long as the pair are fighting each other hard and complying with the rules as they understand them. But, perhaps inevitably, insinuations have been made that some collisions may not have been entirely free of malice. While the drivers themselves haven’t gone that far with their words, their team principals have, but later softened their stances.

Red Bull team principal Christian Horner initially accused Hamilton of “dirty driving” after the collision which left Verstappen in the barriers at Silverstone. Later, after Red Bull’s attempt to provoke a stiffer penalty for Hamilton had failed, Horner clarified “we didn’t at any point say in our submission that it was deliberate action”.

At Monza Horner’s opposite number at Mercedes, Toto Wolff, accused Verstappen of committing a “tactical foul” on Hamilton. The analogy was fitting: As the stewards later ruled, Verstappen was never far enough alongside Hamilton for a pass to be on, which prompted some to suspect he only persisted with the move in order to prevent Hamilton from taking a bite out of his points lead. Like Horner, Wolff later dialled down the rhetoric. “One could see it as tactical foul with the bias that each of us needs to just acknowledge,” he conceded.

While neither side may yet be prepared to openly accuse the other of committing a cynical take-out, the tension between them is rising. There’s only five points between the title contenders, the stakes are sky-high and there’s still eight races left for them to avoid hitting each other.

Deliberate contact is rare in Formula 1, for obvious reasons. Intentionally hitting a rival in an open-wheel racing car capable of well over 350kph is both dangerous and unethical. For it to happen not only must someone succumb to that temptation, the incentive for doing so must be sufficiently high – for example, a world championship is on the line.

This explains the few clear examples we’ve seen to date, though all of them were disputed at the time and some still are. In most cases, F1 either failed to react or did not acknowledge a deliberate collision had occured.

When Alain Prost hit Ayrton Senna at Suzuka in 1989, clinching the title by doing so, he went unpunished. Therefore when Senna responded in kind at the same track 12 months later – at far higher speeds – he also got away with it, even when he later admitted it was intentional.

Michael Schumacher’s championship-winning collision with Damon Hill in 1994 attracted no sanction, unlike when he attempted the same on Jacques Villeneuve three years later. On that occasion, one might cynically note, it was a lot easier to issue a punishment, as it did not involve taking Schumacher’s title away.

Nonetheless the late Max Mosley, who was FIA president during the latter two scandals, subsequently claimed the precedent set in 1997 would be used to strip a driver of the world championship if they won it by deliberately taking out a rival. Over two decades later, that claim has not yet been put to the test (though we have seen another deliberate collision – between Nelson Piquet Jnr and a wall – which race control overlooked at the time).

Is F1 closer to a repeat now than ever before? Verstappen versus Hamilton is getting physical in a way Schumacher-Alonso, Alonso-Vettel, Vettel-Hamilton and even Hamilton-Rosberg never quite did, bar the odd exception (Spain 2016, Azerbaijan 2017).

Perhaps in a few races’ time Silverstone and Monza will look like deviations from the norm. But from the present perspective it looks like a situation which is deteriorating.

However that view isn’t necessarily shared by Formula 1 race director Michael Masi, who pointed out the stewards regard incidents individually. “From the FIA perspective, together with the stewards, we look at each and every incident on its merit, regardless if its Lewis, if it’s Max, if it’s whoever,” he stressed. “Each incident is looked at on the merits of the incident.”

Masi is understandably wary of being seen as coming down on the side of either team or driver. “The pattern of escalation is a perception for some, depending on which person you’re looking at supporting. I think if you ask Christian you probably get a completely different perspective [to Wolff].

“I’m not going to get into the games. We have a very close, exciting championship between two fantastic drivers, and that’s the part we should all be focussing on.”

No doubt Formula 1 should be grateful for having a championship fight between two closely-matched drivers and teams. At the same time, the potential for an unsatisfactory conclusion to the championship is obvious. “I hope the championship is won on the track not in the barriers or the stewards room,” F1’s motorsport director Ross Brawn observed after Monza.

Both drivers have made mistakes and both have been punished for them. Now is an opportunity for a quiet word to the pair of them about ensuring it goes no further than that, and a promise of far stiffer penalties if it does.

123 comments on “Does F1 still have a blind spot for deliberate contact?”