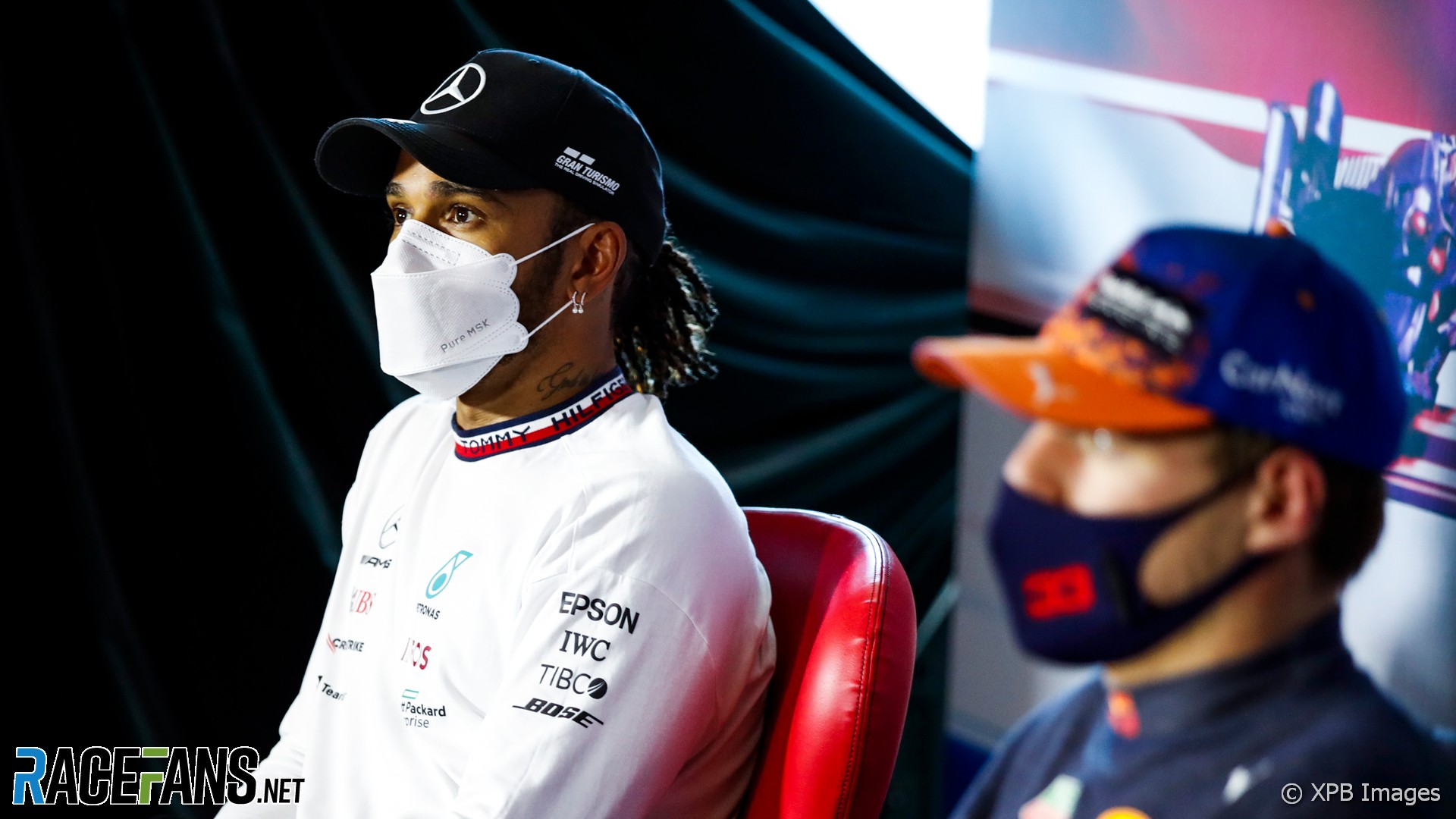 Almost two weeks on from the latest run-in between the two championship contenders, Lewis Hamilton yesterday offered this assessment of his rival Max Verstappen.

“Obviously I’m fighting in my tenth battle, something like that. But I remember what it was like and I know the pressures that comes with it and the experience that go with it so I can empathise with that.”

Hamilton made his remarks when asked whether he was concerned further collisions may occur between him and his rival. His implication was unmistakeable: Verstappen’s mistake which led to their Monza crash occured because he is feeling the pressure of fighting for his first Formula 1 world championship.

“Obviously he won’t admit to it, I’m not going to make an assumption,” Hamilton added when prompted to expand.

“But I’m just saying I remember it was difficult, it was intense. I was going through a lot of different emotions, I didn’t always handle it the best.

“That’s to be expected, it’s a lot of pressure. You’re working in a big team, there’s a lot of self-expectation and pressure because the desire to win is huge. So I was just saying that I empathise and understand that.”

If these words sound familiar, that’s because they are. Hamilton said much the same earlier in the season.

Four months ago, in fact, on the eve of the Monaco Grand Prix. A few days earlier Hamilton had swerved to avoid another of Verstappen’s uncompromising, back-off-or-we-crash first-corner moves in Spain. A few weeks before, that much the same happened at Imola.

The collisions of Silverstone and Monza lay ahead, so Hamilton’s words in Monaco make telling re-reading with the knowledge of what happened next.

“I think I’ve done well to avoid all the incidents so far,” he said. “We’ve got 19 more [races] to go and we could connect, hopefully not.

“The good thing, I think, there is a nice, balanced amount of respect between us. I think perhaps, as you know, he feels perhaps he has a lot to prove. I’m not necessarily in the same boat there.”

Hamilton’s argument is logical enough: There is no substitute for experience and when it comes to fighting for world championships none have more experience than he does. Verstappen, naturally, isn’t going to concede this and sure enough he didn’t when RaceFans put it to him in August.

“The only advantage you can really have, I think, is if you have a faster car,” said the Red Bull driver. “In this sport it’s so dominant when you have a good car, there’s so many good drivers in the sport, but they don’t have the opportunity to fight at the front.

“All of us, we always try to do our best and race in the best possible way. So I don’t really see the advantage there.”

So much for the theory, what about the practice? Is Verstappen buckling under the pressure of his first title fight? There’s little evidence to suggest he is.

Look at how he bore the gigantic weight of expectation at his home race. On a day when his team mate was nowhere, Verstappen single-handedly saw off the combined efforts of both Mercedes drivers without putting a wheel wrong. It was an impeccable drive.

Prior to their Monza collision, which of the two title contenders looked more under pressure that weekend? Verstappen, who was running ahead of his key rival until a slow pit stop spoiled his afternoon? Or Hamilton, who was out-qualified by his team mate, lost three places when the Saturday race began, and after gaining one place at the start of the grand prix lost it at the second chicane?

Small wonder Verstappen’s response to Hamilton’s latest remark about his capability under pressure dripped with sarcasm. “I’m so nervous I can barely sleep,” he scoffed. “It’s so horrible to fight for a title. I really hate it.”

No doubt 2007-specification, GP2-fresh Hamilton was underprepared for the task of taking on a double world champion in his own team plus the might of Ferrari during one of the most toxic seasons in memory. But if the Hamilton of today presumes he is up against a callow rookie who is buckling under pressure he has badly misjudged his championship rival. Verstappen may only be one year older than Hamilton was in that 2007 season, but he starts his 134th grand prix this weekend.

How’s that for pressure? Let’s see if he can make that experience count.