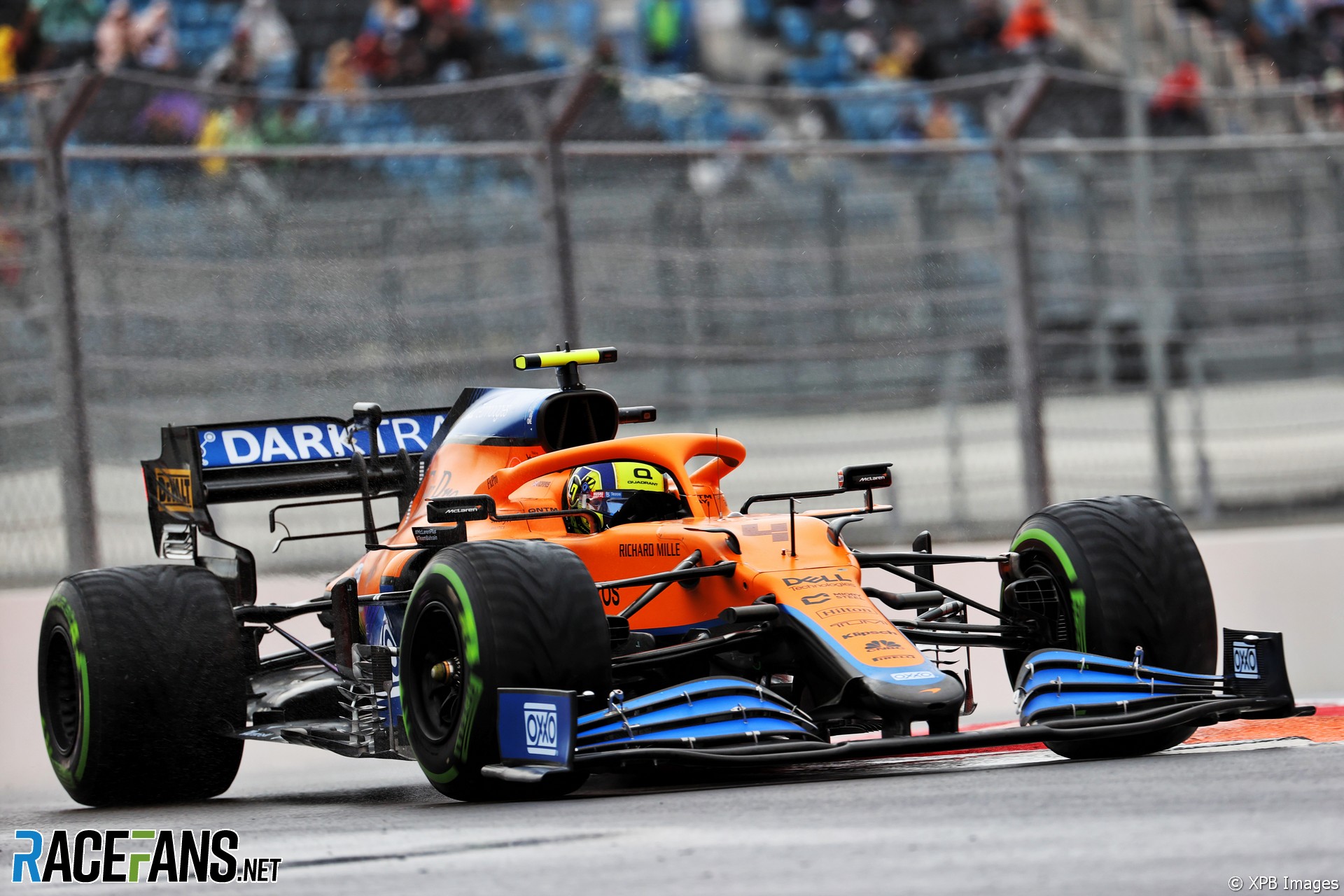 Lando Norris took his maiden pole position in his Formula 1 career by making the best work out of a drying track after Lewis Hamilton spun.

Carlos Sainz Jnr will line up second ahead of Williams’s George Russell and Hamilton, who spun on his final attempt at a flying lap.

After final practice was cancelled due to the heavy rain, the drivers were greeted with a very wet Sochi Autodrom for the start of qualifying and the first session of running all day.

With no rain falling on the circuit but plenty of standing water, teams wasted no time in getting their cars out to explore the treacherous conditions. Only Fernando Alonso opted to take to the track with full wet tyres, with the rest of the field deciding there was enough grip available for intermediates instead.

Max Verstappen ventured out for a couple of laps, but pulled into the pits without setting a lap time – his back row start for tomorrow’s race having been predetermined by his power unit grid penalty and his three-place grid drop for his Monza collision with Lewis Hamilton.

With each lap reducing the level of water on the circuit, drivers stayed out on their intermediate tyres with lap times gradually improving as the track began to dry out. Antonio Giovinazzi had a brief spin on the exit of turn 16 but was able to rejoin the track and continue on his way. The Mercedes of Lewis Hamilton and Valtteri Bottas sat at the top of the times before Sergio Perez usurped Red Bull’s rivals with the fastest time.

As the clock counted down to the end of the session, George Russell sat on the bubble of elimination in 15th, a second slower than Williams team mate Nicholas Latifi. But as the chequered flag flew, Russell was able to improve up to 11th place.

That left Kimi Raikkonen in 16th and out in his first qualifying session since the Dutch Grand Prix three races ago. He was joined by Mick Schumacher, who outqualified Antonio Giovinazzi in 17th place in the Haas. Nikita Mazepin was the final driver eliminated of those who set a lap time in 19th – albeit almost four seconds slower than team mate Schumacher.

The stewards announced that Daniel Ricciardo was under investigation for impeding Lance Stroll after leaving the pitlane and holding up the Aston Martin driver on the approach to turn two.

Carlos Sainz Jnr and Pierre Gasly were both informed by their respective engineers that no more rain was expected for the remaining two sessions of qualifying as Q2 got underway. Intermediate tyres were still the preferred choice of the field, with Hamilton again setting the early pace.

Bottas ruined his first flying lap of the session by locking up under braking for turn two and having to take the escape road as obliged by the race director’s notes for this weekend. His second effort, however, was enough to see him go briefly quickest of all, before he was bested by Mercedes team mate Hamilton.

Gasly was audibly unhappy with George Russell, accusing the Williams driver of impeding him in the final sector. The AlphaTauri’s frustrations were compounded when Russell was able to improve to ninth himself and secure passage through to Q3, with Gasly unable to improve when the chequered flag came out and was eliminated in 12th, just ahead of team mate Yuki Tsunoda.

Sebastian Vettel was the first driver to miss out at the end of the session, just over half-a-tenth slower than Sainz in 11th place. The stewards investigated an incident between Vettel and Tsunoda, but announced that there would be no action taken.

Nicholas Latifi and Charles Leclerc both opted not to participate in Q2, the pair having heavy grid penalties for exceeding their allowance of power units for the season and were duly eliminated in 14th and 15th, respectively.

The track was in its driest state of the session so far when the act of qualifying began with Mercedes immediately sending both their cars out on fresh intermediates. Hamilton was the fastest of the pair after their first attempt at a flying lap, seven tenths to the good over his team mate.

Despite significant sections of water still present off the racing line around the Sochi circuit, Williams gambled by bringing in Russell to move onto soft dry tyres. Russell was joined by Sainz and Norris who also made the switch, but the early laps of the dry tyre runners were no faster than they were on the intermediates.

Mercedes chose to bring both their cars in, but a mistake by Hamilton on the way into the pit lane saw him understeer into the inside of the pit wall. Hamilton managed to drive to the Mercedes pit box, where he was given a fresh set of soft tyres and a new front wing. With Bottas waiting behind his team mate, Hamilton was pushed out of the way to allow Bottas to resume and allow checks of his car to be completed before eventually being sent on his way.

The grip level was still minimal for the dry tyres and lap times were not improving. However, as the chequered flag flew for the final time, the threshold finally appeared to be met as Sainz began to set fastest sectors and jumped to the top of the times. Russell moved to second place, before Norris completed the fastest lap of the session to leap to the front and take provisional pole.

The only driver with a realistic chance of denying Norris was Hamilton, but when the Mercedes spun at turn 16, Norris’s maiden pole position was secured. Sainz will start alongside his former team mate in second, with George Russell starting third in the Williams after another impressive wet qualifying performance.

Hamilton will start from fourth on the grid, ahead of Daniel Ricciardo in the second McLaren. Fernando Alonso will start sixth, with Bottas, Stroll, Perez and Esteban Ocon rounding out the top ten starters.