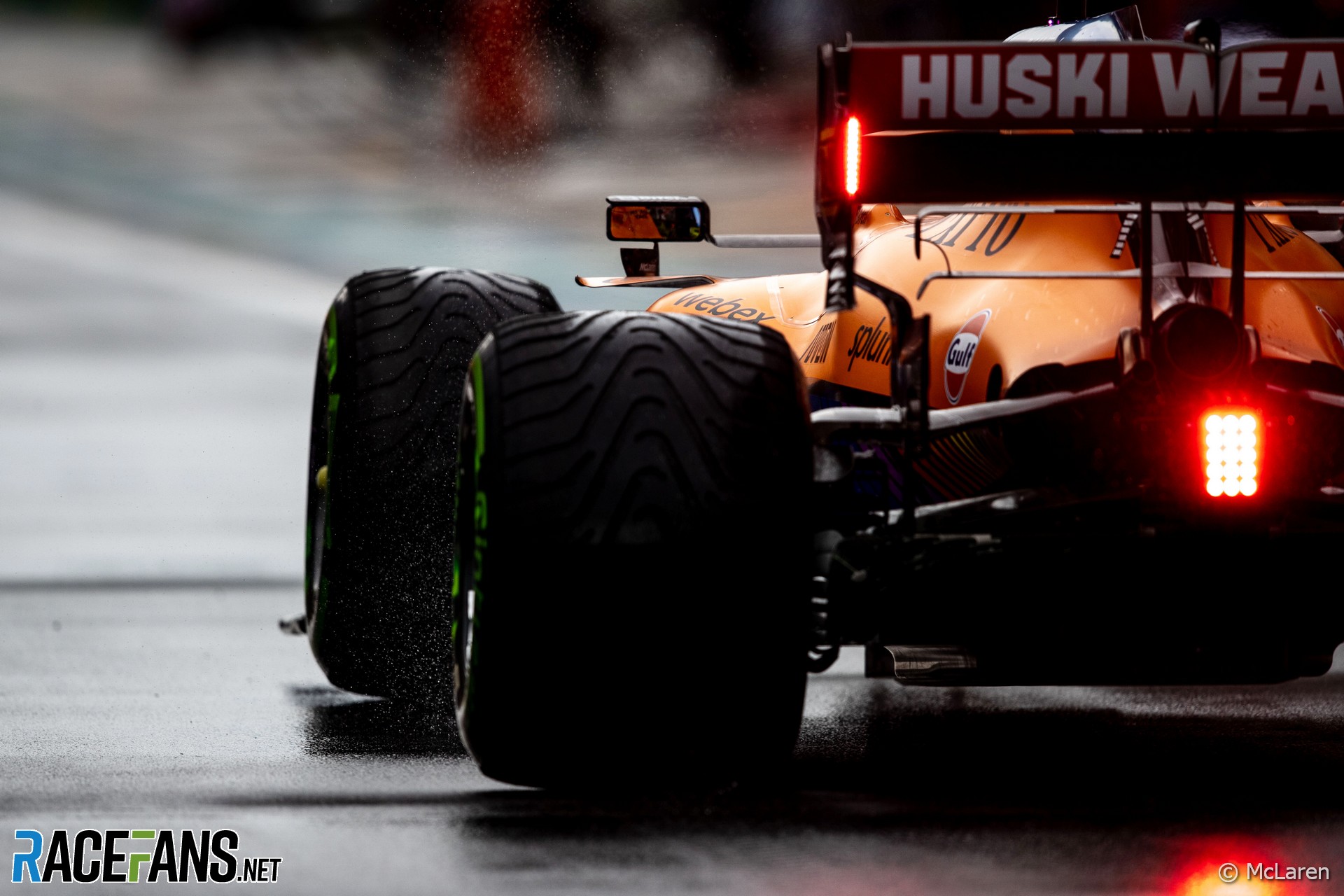 When rain began to fall in the closing stages of the Russian Grand Prix, one McLaren driver made the right call to pit while the other took a race-losing decision to stay out.

Daniel Ricciardo dived for the pits on lap 48 for a set of intermediate tyres as the track conditions worsened. But team mate Lando Norris, who had led much of the race, stayed out until the 51st lap on his slicks. By then it was far too late, and it cost Norris a shot at victory.

The two drivers were in different situations as the race entered its final laps. Leader Norris had Lewis Hamilton breathing down his neck, but the rest were a long way behind – Sergio Perez was 40 seconds in arrears on lap 47.

Ricciardo, running fifth, had recently been passed by Perez and was running on an older set of tyres than Norris. He therefore lost grip more quickly when the rain started to fall.

At this point the McLaren pit wall and their drivers swapped details on the state of the track. The information flowed more frequently between Ricciardo and race engineer Tom Stallard than it did between Norris and his engineer Will Joseph.

Because Ricciardo was over 40 seconds behind his team mate at the time, as he began each lap the conditions were worse for him than they had been for Norris on the same tour earlier.

As the rain intensified, both drivers found it increasingly difficult to keep their cars on the track. But while Ricciardo decided to fit intermediates, Norris stayed out.

Speaking after the race, without knowledge of his team mate’s radio exchange, Ricciardo said he made it clear to McLaren when he felt intermediates were needed.

“My situation is that when some of the track’s dry and some of it’s wet, it really has to be us [that decides].

“The team can help us on pit wall and they were saying there’s a bit of rain on pit wall, but not too heavy. Then I was saying, look, it’s really wet turn five and seven. And that next lap I nearly went off. Well, I did go off.

“So I just told the team I need to come in for inters. I was very black and white with them, but that was my situation and that was the right thing for me at the time.”

Norris had his mirrors filled with Hamilton’s Mercedes and was preoccupied with not losing his lead as they picked their way past backmarkers.

At around the same time – as he was further ahead of Ricciardo on the track – Norris made it clear he wanted to stay on his slick tyres.

But while McLaren kept Norris aware of other drivers who had fitted intermediates, they did not point out his team mate was one of them. As Norris later revealed he was relying on McLaren’s assessment of the weather to guide his decision, this was a potentially vital piece of information.

Norris saw Hamilton pitting in his mirrors, but decided to stay out again. Had he come in at this point, with the lead he had over the rest of the field, he would likely have still salvaged second place.

Norris must have realised the moment he passed the pit lane entrance on lap 50 he had made a mistake. He ran wide at the final two corners, and although the braking zone for turn two was in good condition, he slithered off-track at turn four.

“It’s full wet, boys” he told the team, and despite slowing significantly he still spun off at the next corner. He understeered wide repeatedly and spun on his way into the pits in an excruciating tour of the circuit which took over three minutes.

Once he fitted intermediate tyres, Norris matched Ricciardo’s lap time to within a tenth of a second on the final tour. But over the preceding five laps he’d lost a massive 68 seconds to his team mate.

While a desolate Norris said nothing on his way back into the pits, Ricciardo gave more insight into how the conditions had worsened at the end.