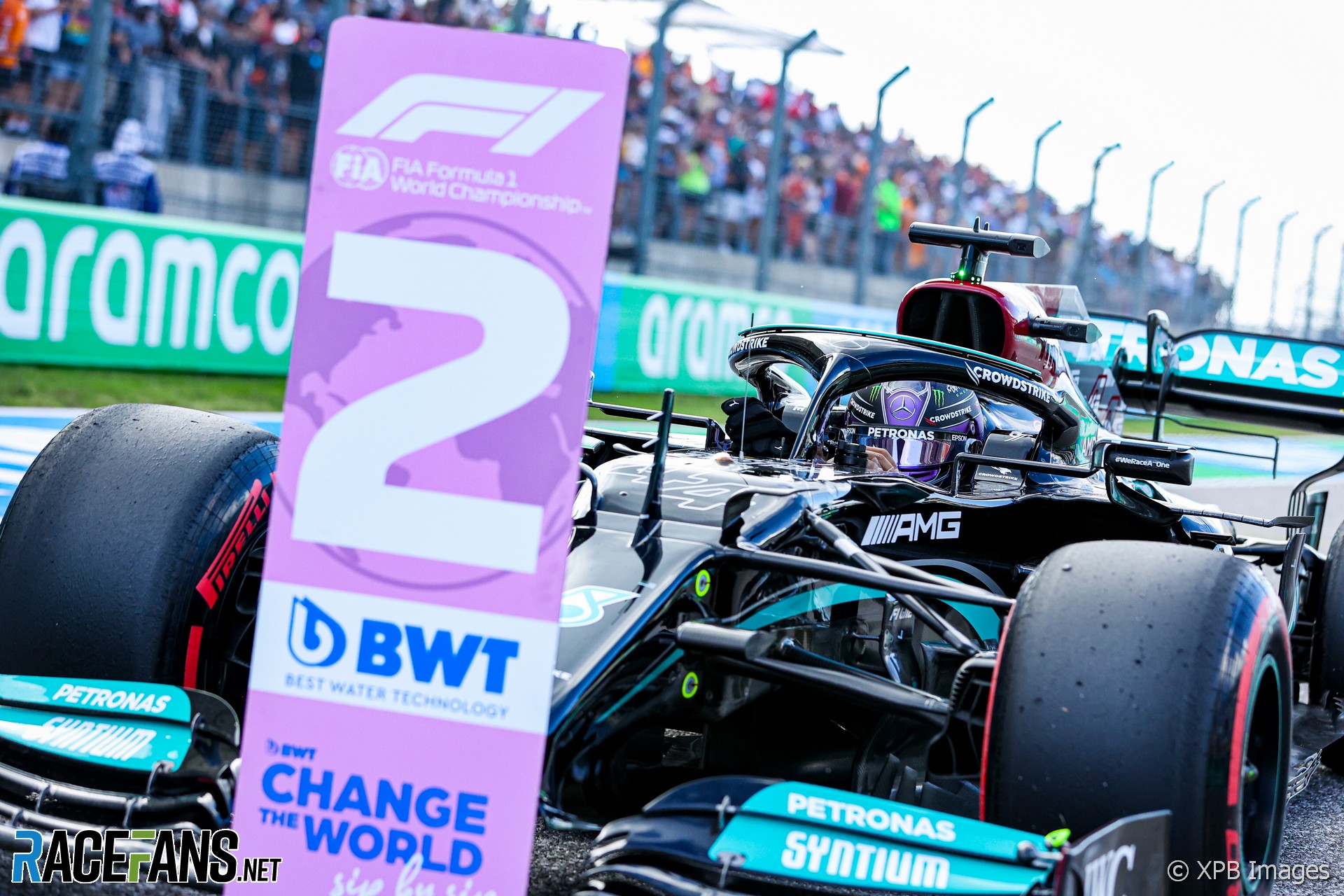 Max Verstappen took pole position but Lewis Hamilton was able to join him on the front row, splitting the two Red Bulls.

But with the Mercedes driver’s team mate languishing back in ninth after another engine change and penalty, can Hamilton overcome the rapid Red Bulls single-handedly?

With drivers expected to need to pit twice due to tyre degradation in the warm conditions, we could see more variety in teams’ tactics than usual. But however the cards fall for the title contenders, Red Bull head into the race in strong shape.

The absence of Valtteri Bottas from the sharp end of the grid leaves Mercedes short of strategic options. Even if Hamilton manages to use his starting position on the inside to prise the lead out of Verstappen’s hands, Red Bull will have the advantage of two cars able to pre-empt or respond to his race plan.

But the difficult task Mercedes face, following their strong showing on Friday morning at Circuit of the Americas, is that Red Bull have a slight advantage on pace. “If you look at the pure performance picture, both Red Bulls look very strong and probably, on paper, the cars that are ahead,” he said. “But we’ve seen many Sundays that took a very different direction because of the start scenario or DNFs.”

With neither of the championship contenders taking grid penalties for engine changes, Verstappen and Hamilton share the front row of the grid for the first time since the Dutch Grand Prix. They avoided a repeat of the British Grand Prix collision on that occasion, but did at the next round in Italy. Having already had one skirmish in practice this weekend, the pair inevitably faced questions over the possibility of a repeat in the race, which they were quick to dismiss.

As Hamilton knows well, his best chance of passing Verstappen will come at the start. If Red Bull are as quick as Wolff suspects, it may be his only hope. Second on the grid at COTA offers Hamilton cause to feel optimistic about his chances of being in the lead by turn two: The driver who has started there has ended lap one in the lead in three of the last five races at this track.

On two of those occasions Hamilton was the pole-winner who lost out. On the other, in 2015, he elbowed Nico Rosberg onto the run-off area, leaving his team mate fifth by the end of the first lap. Verstappen can expect similar treatment tomorrow if Hamilton gets the chance.

The geometry of the run to turn one helps the driver who starts second more than at other venues. The corner widens significantly on approach, making it harder for the pole-winner to keep a rival behind. There’s ample run-off at the exit, so if Hamilton can start well enough a lunge for the lead becomes a realistic possibility. The key question is how good the grip is off-line at this track. It’s been poor in the past: Charles Leclerc expressed some disappointment at moving up the grid one place to an off-line starting position.

As the last race in Turkey showed, the stewards are taking a tougher line on first corner incidents this year, and both title contenders will be anxious to steer clear of penalties. But the stakes are high for Hamilton, and with Bottas lining up further back the start offers a vital opportunity to disrupt Verstappen’s day.

Before qualifying, Red Bull had to change the rear wing on Verstappen’s car due to concerns over possible cracks. The bumps and kerbs at Austin deal out considerable punishment to the cars.

Although Alfa Romeo boss Frederic Vasseur said he had found the effect was less severe than expected, Toto Wolff said Mercedes had taken steps to prevent damage, even at the cost of pace.

“The car was bottoming out quite heavily and that breaks the car, so we took some mitigating steps to not break it or massacre it that hard in order to survive the race,” Wolff said. “It’s definitely a compromise for going fast around the track, but maybe a necessity to actually finish.”

Although W Series cars are smaller and generate much lower aerodynamic loads than F1 cars, two suffered suspension failures already this weekend: Miki Koyama during the all-female series’ qualifying session and Abbie Eaton during the first race. Since COTA’s surface began to deteriorate in 2015 such failures have become slightly more commonplace in F1.

Tyre strategy decisions begin in Q2 for drivers who qualify in the top 10 – but not usually for those at the back of the grid. For three drivers there was a very specific objective in the session – beat each other but don’t place higher than 11th, in order to get the best start from the back and keep free tyre choice.

Sebastian Vettel beat Fernando Alonso and George Russell, meaning he’ll be the first of the grid-penalty-stricken starters. “In Q2, we were backing off”, he explained, “we didn’t want to go through to the top 10.” As a consequence, we may well not know the Aston Martin’s true pace – which had looked better in free practice. For all three penalised drivers, however, their team mates failed to progress further than they did.

In the top 10, two drivers will start on soft tyres – Yuki Tsunoda and Carlos Sainz Jnr. The Ferrari driver seems to have tested a long run on the soft tyres, putting in a 12 lap stint during second practice. Across the laps, Sainz drove consistently around a 1’42 lap, which should be plenty competitive at high fuel, on the race start.

Mario Isola, Pirelli’s head of F1 and car racing, said that the medium and hard compounds were still favourable, however. “The medium tyre was favoured by the majority of the top 10 on the grid, as starting on this compound allows more flexibility in terms of strategy. Managing the softs to avoid overheating ­– especially at the rear – is crucial in these warm conditions, and this makes the medium and the hard the key choices for the race.”

In terms of pit stops, Pirelli expects it won’t be the usual one-stop race. “A two-stop strategy is the more likely, with the high speeds and abrasive surfaces here taking a lot out of the tyres,” said Isola. “At the same time, the relatively low pit stop time loss and number of overtaking opportunities mitigate the advantages of a one-stopper.”

However, Isola said that different combinations of tyre compounds “closely match” across a two-stop strategy, so drivers outside the top 10 could still try a soft starting tyre to make early gains.

There are two potential changes in the weather that could affect drivers during the race. Firstly, the wind is expected to slightly change direction from a south-easterly to due south direction – although that might still be beneficial.

George Russell said the switch from Friday, when wind was coming from the north, to Saturday’s weather, had dramatically improved Williams’ car balance. “The wind changed today to be a bit more headwind though that really tight, twisty section, which really brought the car towards us, whereas yesterday it just wasn’t really reacting very well in those sectors,” he explained.

However a recurrence of the rain which fell at the end of Q3 does not appear to be on the cards, with the official weather forecast giving a 0% chance of precipitation during the race.

Will the title contenders keep it clean today? Can Ferrari keep their McLaren rivals behind? Share your views on the United States Grand Prix in the comments.