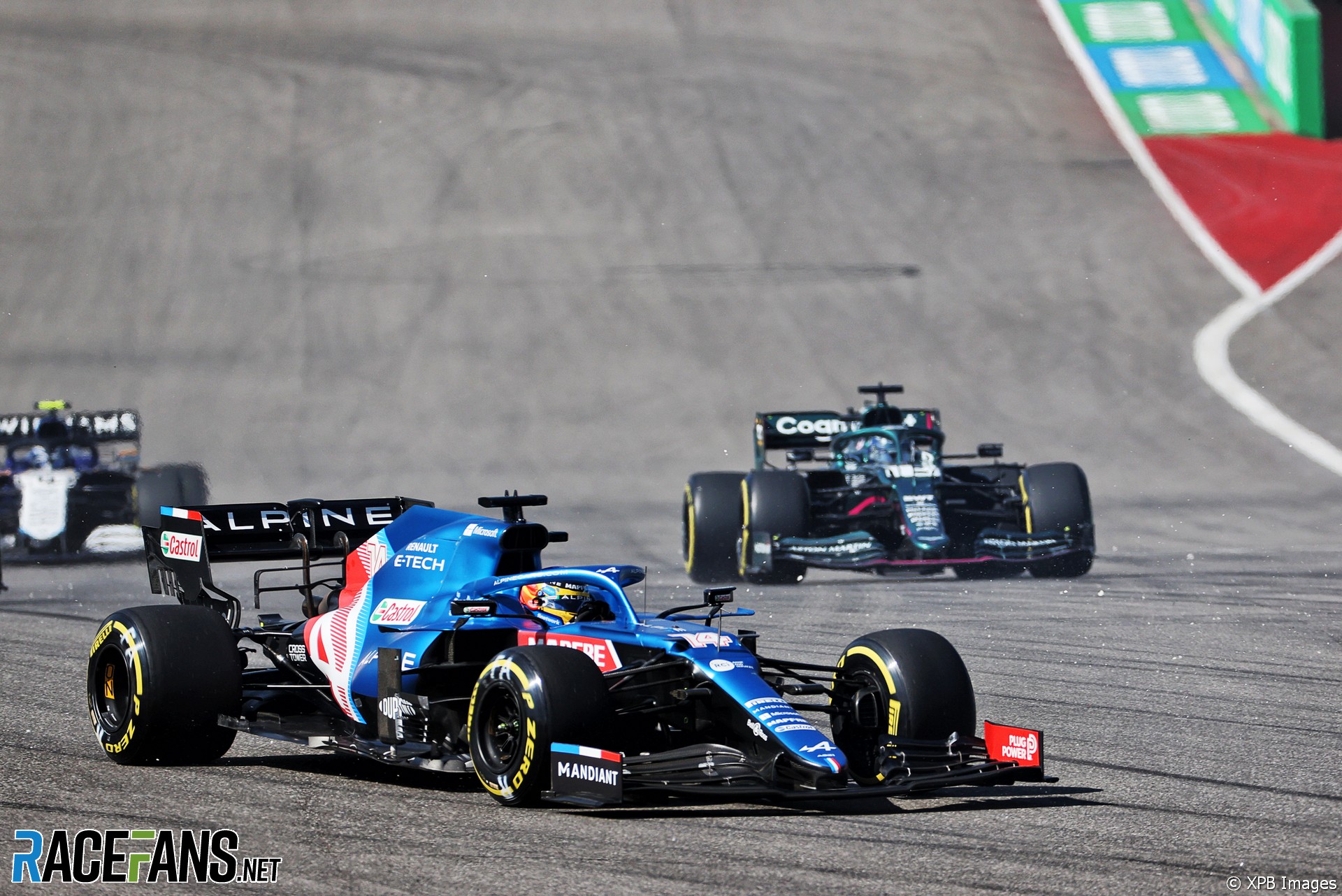 The Alpine driver was involved in three rows over track limits involving the Alfa Romeo drivers. He repeatedly complained on the radio after he was overtaken by Kimi Raikkonen, who ran wide at turn one and was allowed to keep the position.

Later in the race Alonso was told to hand a place to Antonio Giovinazzi after running wide. In a further incident the Alfa Romeo driver was instructed to do the same after he went off

“It was normal battles but the rules are a little bit random,” said Alonso after the race.

A conversation between his team and FIA F1 race director Michael Masi discussing the Raikkonen incident was played during the broadcast of the race. However Alonso, who has criticised the stewards’ decisions previously this year, said he isn’t interested in discussing it futher.

“It’s the way it is,” he said. “Unfortunately for the fans in America they saw a show that they didn’t deserve.”

Raikkonen passed Alonso on the outside of turn one on lap 16. The pair made contact and Raikkonen ran onto the run-off. Alonso immediately complained his rival had gained an advantage off the circuit.

“They’re looking into it,” said his race engineer Karel Loos. “There’s nothing to look at,” Alonso answered.

The stewards ruled in Raikkonen’s favour, to Alonso’s displeasure. “Okay mate apparently that is allowed,” said Loos. “No further action. We need to get him on-track.”

A few laps later Alonso found himself in a battle for position with the other Alfa Romeo of Antonio Giovinazzi. He lunged down the inside of his rival at turn 12, ran well wide, and kept the position after rejoining the track. Giovinazzi complained about Alonso’s move on the radio.

With the Alpine driver clearly believing the lack of a penalty for Raikkonen demonstrated he should be allowed to keep the position, the team’s sporting director Alan Permane raised the matter with FIA F1 race director Michael Masi, who made it clear he did not agree.

Soon afterwards Alonso was advised to hand back the position he had gained. “We’ve been requested to give the place back to Giovinazzi or we will get a five-second penalty,” said Loos.

Alonso pressed on to begin with, seemingly trying to build up enough of a lead over his rival that the penalty would not cost him a position when he pitted.

“At the moment we’re 2.4 seconds ahead of Giovinazzi,” Loos told him later. “We need five before the stop.”

“Fernando we would like to give it back, please,” Loos then added. “Okay,” Alonso replied, and the position was relinquished.

He eventually re-passed Giovinazzi, but not without further track limits controversy. Again Alonso passed his rival at turn 12, but this time Giovinazzi ran wide and stayed ahead.

“I guess he needs to give me back?” said Alonso on his radio. “For the same thing. He was outside the same corner.”

“He was outside turn 12,” Alonso pressed. This time Giovinazzi was told to give up the place. “He’s been told to give it,” confirmed Loos.