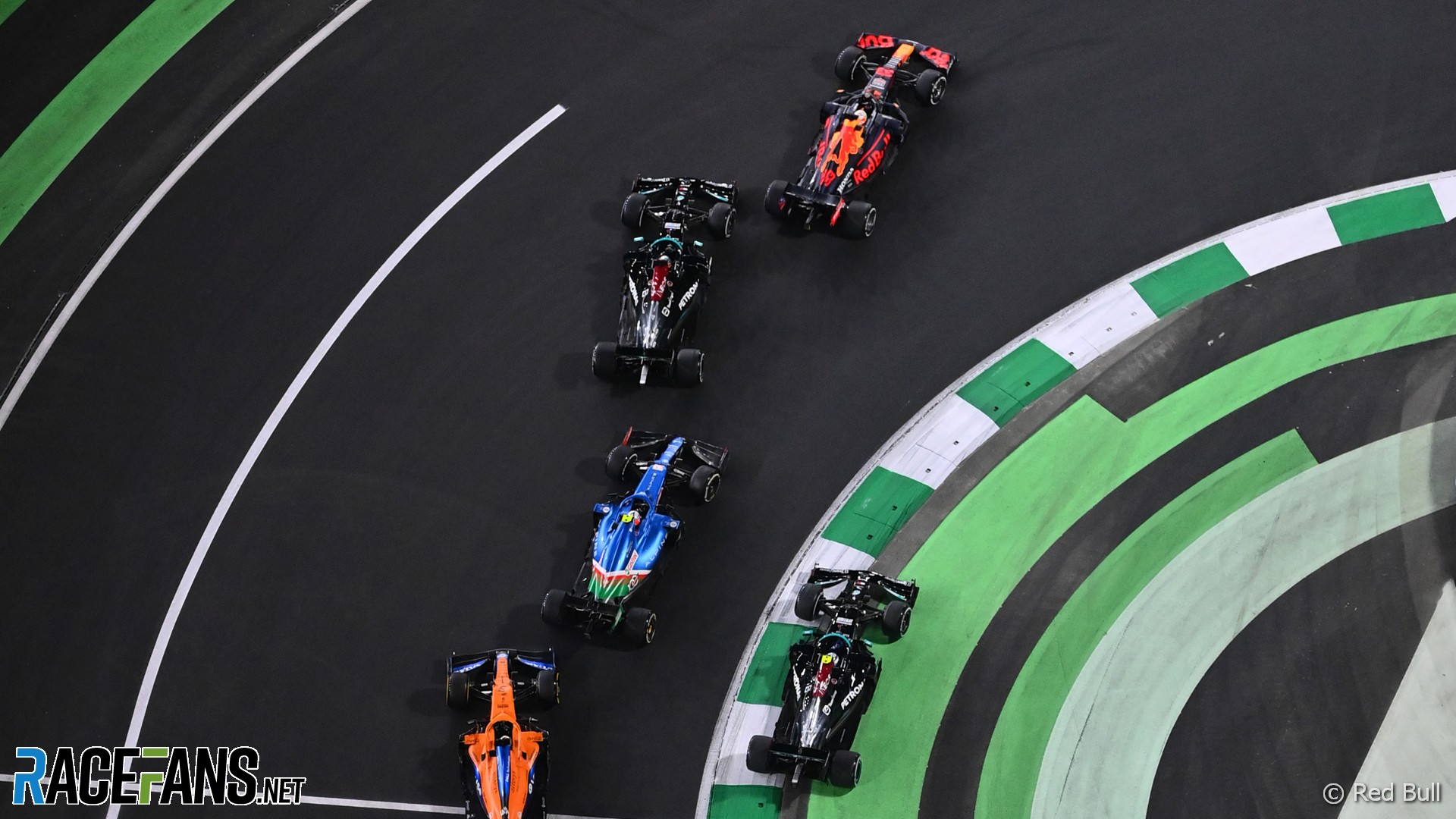 Should Max Verstappen have been made to give up the lead of the Saudi Arabian Grand Prix after passing Lewis Hamilton off track at the restart?

After the Saudi Arabian Grand Prix was stopped for barrier repairs after Mick Schumacher’s turn 22 crash on lap nine, the race resumed with a standing start, with Max Verstappen at the front of the field and Lewis Hamilton lining up alongside him.

When the lights went out, Hamilton got a better getaway off the line and pulled ahead of Verstappen on the short run to the first corner. Verstappen tried to retake the lead of the race around the outside of the corner, before running over the inside kerbs of turn two, almost colliding with his championship rival. Verstappen took the lead, while Hamilton lost second place to Esteban Ocon after taking avoiding action.

During the subsequent second red flag suspension, race director Michael Masi agreed that Verstappen must give up the lead to Ocon and take the second restart behind Hamilton in third place.

The drivers’ post-race reactions are not available yet.

Hamilton immediately reported his belief that Verstappen had passed him illegally over team radio.

“He just retook me over off outside the white lines,” Hamilton continued. “Roger, Lewis. We’re on it,” Bonnington assured his driver.

Max Verstappen did not comment on the incident over team radio.

In a conversation with Red Bull sporting director Jonathan Wheatley, race director Micheal Masi suggested to the team that they voluntarily drop Verstappen behind Ocon and Hamilton before the restart. There was some confusion as an initial message from Masi indicated Verstappen would only fall behind Esteban Ocon.

“We would drop you back behind Hamilton,” Masi confirmed to Wheatley. “That’s my offer. You have my suggestion.”

After conferring with the team, Wheatley replied: “Yeah we’ll accept that. We understand the order will be Ocon, Hamilton, Verstappen.”

Verstappen surrendered the positions on the lap to the grid after the pitlane was opened.

Who do you think was responsible for the collision? Should the stewards issue a penalty? Cast your vote below and have your say in the comments.

Do you agree race control handled the restart incident between Verstappen and Hamilton correctly?

101 comments on “Poll: Should Verstappen have had to surrender the lead after the restart?”