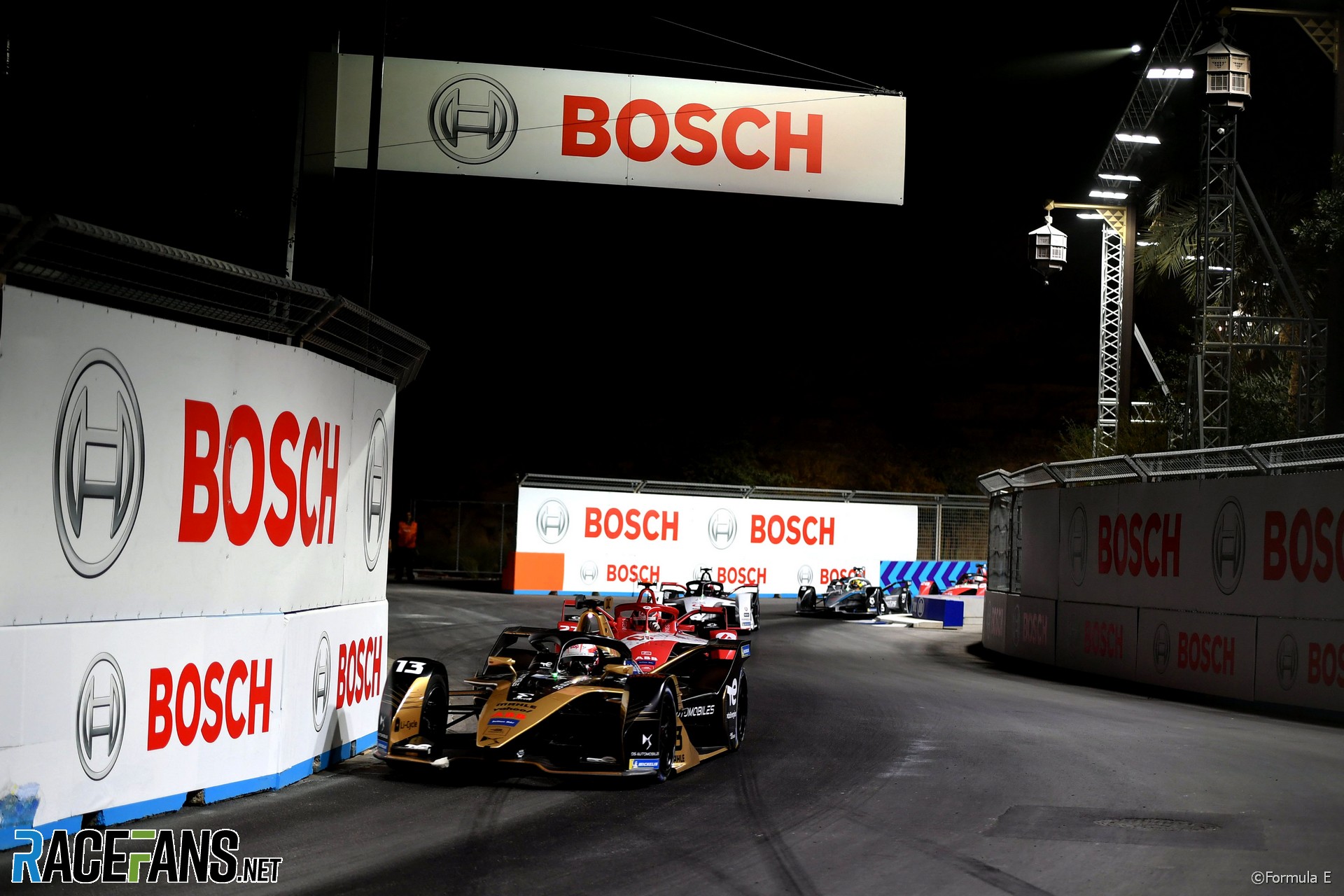 Formula E drivers have expressed concerns after two alarming incidents involving a crane on track during the second Diriyah E-Prix.

Alexander Sims crashed his Mahindra in the narrow first sector of the circuit with just under ten minutes remaining in the race, leading to the Safety Car being deployed to help neutralise the race to recover Sims’s car.

However, drivers were suddenly forced to stop on the circuit after a telehandler vehicle got in the way of the Safety Car in front of race leader Edoardo Mortara, forcing them to slow down and causing a chain reaction in the field which led to several drivers colliding at low speed. Then, drivers were seen passing close to the Mahindra in the air as it was being lifted off the circuit.

Double Formula E champion Jean-Eric Vergne expressed his disapproval of how the incident was handled by race control in a post on social media on Sunday.

“Still shocked to see how the end of the race was handled,” Vergne posted. “A crain [sic] on track, a safety car stopping right before it in a blind corner resulting in cars piling up, no information given to us… seems like people don’t learn from past mistakes.”

Nissan Edams driver Maximilian Guenther told RaceFans that the sport had been “lucky” nothing more serious had happened with the telehandler on the circuit.

“It seemed a bit unsafe, because the car was moving so much,” Guenther said. “We tried to obviously keep enough space to the car, but as well, we’re not going fully through the dust on track, because there was debris and everything in this dirty part of the track, so you don’t want to risk like a puncture or something.

“On the other end, you have this car swinging around, which was kind of very special. So, luckily, nothing happened there.”

Speaking after the race in which he finished second, Envision driver Robin Frijns said the way the recovery of Sims’s car was handled was “quite dangerous”.

“I think it was quite dangerous because obviously I was behind Edo [Mortara] and suddenly the Safety Car stopped,” Frijns explained. “I just hit him and the only thing I hear behind me is carbon fibre cracking. Obviously the crane was in the middle of the track and the Safety Car had to stop, but I think it was not really well communicated in a way.

Race winner Mortara described the moment when the Safety Car arrived at the accident scene with the telehandler in the middle of the circuit.

“To be honest, it’s the first time that I’ve seen a crane in front of me trying to manoeuvre in the middle of the race,” Mortara said.

“The guy came out, basically, and he was pretty bad at manouevring his crane, so… [laughs]. I actually found it a little bit funny at the time, but obviously for the guys behind it’s not funny because they are now coming with quite some speed.”

FIA race director Scot Elkins told RaceFans that his team “were taking all of those safety measures into account” during the incident.

“Again, really slowing the safety car down really, really slowly,” Elkins said. “That’s probably the one error – of not giving everybody a heads up that the safety of slowing down, because it did back up a little bit and was a little bit discombobulated.”